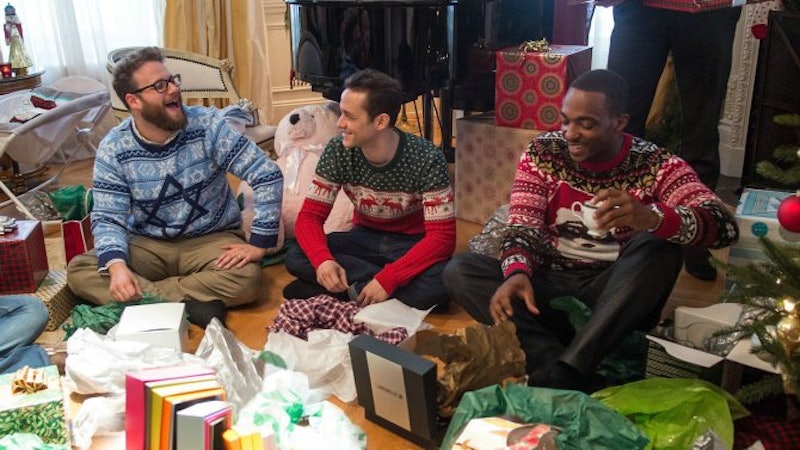 There are a few things I've come to expect from my big-screen comedies these days: great acting from talented stars, a ton of funny jokes that'll make me burst into laughter, and, of course, a huge list of pop culture references bound to please the Internet-obsessed members of the audience (aka, all of us). Thankfully, Seth Rogen, Anthony Mackie, and Joseph Gordon-Levitt's newest movie has all of this in spades, and when it comes, especially, to all the pop culture references in The Night Before , the movie succeeds in being the Christmas-themed spectacle of your dreams.

From a rendition of Kanye West's "Runaway" done on a Big-themed piano to a duet of "Wrecking Ball" alongside the one and only Miley Cyrus, The Night Before , out on Friday, has all the pop culture-related jokes and references a fan could ask for, and then some. Trust me — if you've turned on a TV or read an issue of EW lately, you're going to be plenty satisfied by the movie's many nods to Hollywood and the crazy world of entertainment. Below, I've listed the 16 best and funniest pop culture references featured in the film. Spoilers ahead!

As seen in the movie's trailer, the gang does a piano-and-rap rendition of West's "Runaway" while in a department store, playing on a... well, that's next.

"Runaway" occurs thanks to a huge floor piano right out of Big, and the gang has way too much fun acting out the famous scene.

"This can hold over 100 songs!" One of the guys says during a flashback, when gifted with a first generation iPod. Lol.

When Rogen's Isaac talks to his tiny, blonde twin nieces, he compares them to the girls from The Shining. It's accurate.

Isaac prides himself on being a "rock" for his pregnant wife, and she likens him to the actual Rock, Dwayne Johnson.

The Night Before is filled with nods to Home Alone, which should please all you '90s kids in the audience. There's a pratfall due to marbles, a Wet Bandit, and a perfect Rogen-done reenactment of that famous hands-on-the-face scene.

During karaoke, the gang gives a heartfelt rendition of Run DMC's "Christmas in Hollis." It's fantastic.

Ilana Glazer's cheating, stealing character, Rebecca, happily compares herself to The Grinch, and doesn't bat an eye when she's called the Mayor of Whoville.

At the big Christmas party, Cyrus performs her hit "Wrecking Ball," with the help of Joseph Gordon-Levitt. Yes, really. Speaking of Miley...

Cyrus gets annoyed at Gordon-Levitt's Ethan calling her by her full name, so she jokes that he should just call her "Hannah" instead.

Rebecca, happy with her evilness, loves the comparison she gets to Die Hard's villain Hans Gruber.

As a nod to Ilana Glazer's TV fame, the movie has her character shout "yaaaas" when gets excited.

The guys play a few rounds of Nintendo 64, complete with the very early '00s consoles, while they wait to go out.

This song gets sung, and while it's brief, it's wonderful.

Due to Chris' (Mackie) fame as a football star, the trio drive to and from their adventures in a Red Bull-sponsored limo. It is crazy.

When it's finally revealed that the big party is hosted by Michael Shannon's Mr. Green, the man compares himself to Gatsby in the famous novel, explaining that he loves the idea of being a silent, invisible figure behind a huge party.

When it comes to pop culture references and jokes, the movie does not disappoint.