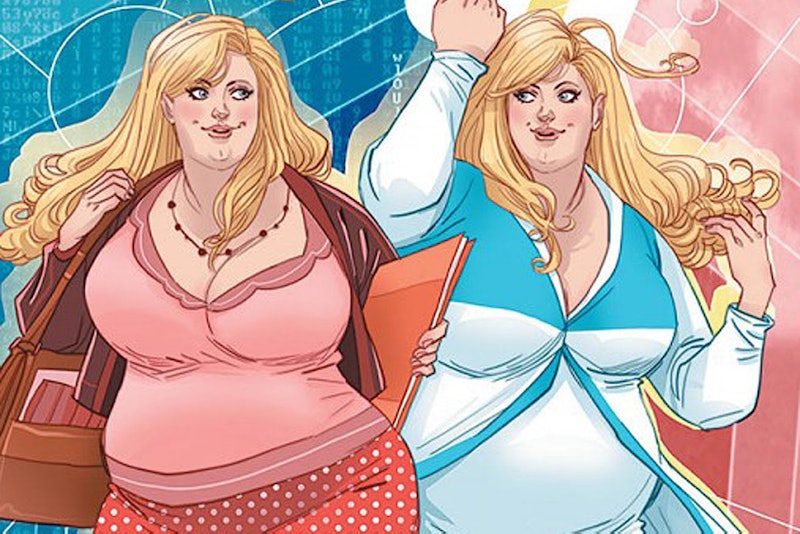 Well, folks, it's happened: Women of size finally have a leading comic book superhero who looks like them. Meet plus-size superhero Faith, who uses her telekinetic and flying abilities to become Los Angeles' protector Zephyr. The character has been around in a secondary role for more than 20 years, but now Faith is getting her own series.

Faith "Zephyr" Herbert first premiered in Harbinger comic back in 1992. Harbinger relaunched three years ago, and now Jody Houser has successfully pitched a Faith-based miniseries to publisher Valiant. The four installments will combine Houser's writing with art from Francis Portela and Marguerite Sauvage.

Like the rest of the media, comics and cartoons aren't generally kind to characters of size. Gungrave's Bob was never without something to eat. The Godchild manga featured a villain who sold deadly parasites as a miracle beauty product to young women of size. And Big Bertha ... I mean, really?

Faith follows the young superhero through both her day job in journalism and her nightly, caped adventures. From the official series description:

When she’s not typing up listicles about cat videos, Faith makes a secret transformation to patrol the night as the City of Angels’ own leading superhero — the sky-soaring Zephyr!

Readers unfamiliar with the character shouldn't expect Zephyr to be the svelte, you'd-be-cute-if-you-were-thin version of Faith. This heroine stays the same size, no matter which identity she's using. But make no mistake: she's a hero first, and a woman of size second.