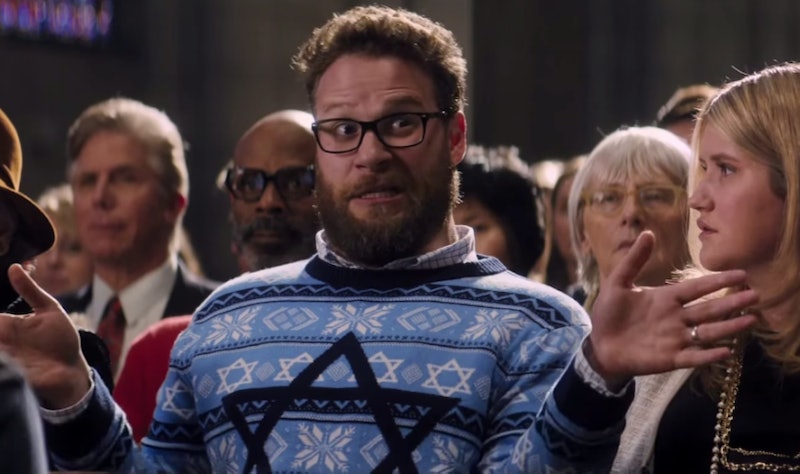 Christmas comedies hold a unique place among movies because if they're any good, they're pretty much guaranteed to run on basic cable every year for at least a few decades. The latest entry to this genre, The Night Before , looks to be very good. The film stars Seth Rogen, Joseph Gordon-Levitt, and Anthony Mackie as three best friends who have a tradition of going out every year for Christmas Eve as a way to comfort Gordon-Levitt's character, who lost his parents on Dec. 24, 2001. The movie looks absolutely insane, but also features some great music judging by the trailers. So with all of these killer tunes, fans are wondering where they can get The Night Before soundtrack.

Unfortunately, no soundtrack for the movie has been released yet. However, there is enough music featured in the film's promotional material to give fans an idea of what they should expect, and it can be broken down into three categories: Hip hop, Christmas music, and Miley Cyrus. Cyrus even has a cameo in the film! The characters themselves in fact appear to take part in a number of musical scenes, further proving the importance of music to the movie. So even though there's no official soundtrack yet, here's the music that's been featured in the trailers so far.

"The Wonder of It All" — Brand X Music

This is the sound that plays during the opening of the film's red band trailer, and it's downright magical. I can practically feel the snowflakes on my tongue.

The guys play this on what appears to be the giant piano at FAO Schwartz, and I'll just say they perform a flawless rendition.

"Christmas Is That Time of Year" — Andrew Kingslow and Sara Dowling

This song is all over the trailers, and with good reason. Most Christmas songs are super old, so when a new one comes along that's actually good, it's something special. I love everything about this song, especially the way its doo-wop styling sounds like it could have been a track from the classic album, A Christmas Gift for You from Phil Spector.

This song (the second featuring Pusha T) plays throughout the second red band trailer and really sets the stage for the movie's party scenes.

Gordon-Levitt raps this song's NSFA lyrics to the unborn child in the womb of Jillian Bell's character in the middle of a quiet family gathering. That scene alone should give you a good idea of what this movie is about.

As Mindy Kaling points out in the trailer, this song is basically perfect: "You can cry to it, you can run to it, you can party to it." The killer track looks to play a big role in the film, with Cyrus even performing a duet with Gordon-Levitt in the trailer. Look for "Wrecking Ball" to add "timeless Christmas carol" to its list of accomplishments after this film.

While fans wait for the actual soundtrack (if there is indeed one coming) to be released for The Night Before, they can at least get by on these tracks in the meantime. Or just go check out The Night Before in theaters starting Nov. 20.