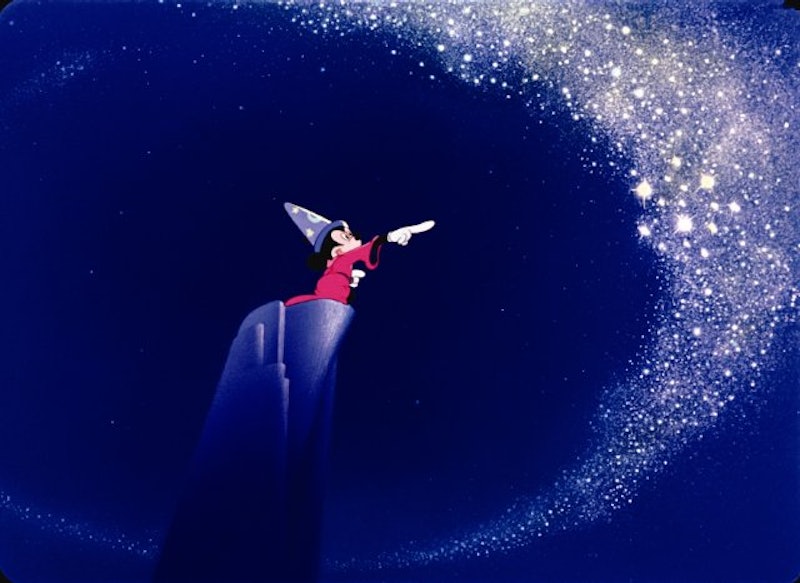 When women my age plop themselves on the sofa and uncork a bottle of wine to give some beloved Disney movies a re-watch (Do guys do this, by the way? It’s really fun, and I highly recommend it), we usually choose some '90s Renaissance favorites like Beauty and the Beast , The Lion King, or The Little Mermaid. And while we’ll occasionally throw in some of the older masterpieces, like 1959’s stunningly beautiful Sleeping Beauty or everyone’s favorite flying elephant tale Dumbo, it’s pretty rare that we think to revisit Fantasia , which just marked its 75th anniversary — but maybe it's time we should.

As the third film in the Disney’s feature-length repertoire, Fantasia is probably the most strange and experimental film the studio has ever made. It isn't based on a fairy tale, and it expects a bit more of its audience. By combining the highbrow culture of classical pieces with the low/middlebrow medium of animation, Walt Disney succeeded in transforming his own industry. But as a bizarre amalgamation of animated shorts set to orchestral music, Fantasia was met with resistance from many involved, and wasn’t exactly a success; decades later, it's still highly underrated, and largely ignored in favor of the studio's more popular films. Despite this, though, Fantasia remains one of the most innovative and beautiful pieces of animation and cinema altogether, and a movie that any cinephile or Disney fan should give another shot.

At the very least, they should appreciate its complicated history. After making Mickey Mouse cartoons and Silly Symphonies for years, Walt Disney had decided to try something new, something that no one in animation was doing at the time: create an animated feature length film. His plan was met with skepticism, but as we all know, Snow White and the Seven Dwarfs went on the make history, earn millions, and win numerous awards. PBS’ wonderful episode of American Experience devoted to Disney explained that the movie helped the innovator understand what his films were capable of, and help him decide what direction to go next. He had known that he could make audiences laugh, but he had wondered if he could make them cry, too; when he heard the waves of sniffles during Snow White’s premiere, he had his answer.

From then on, Disney knew that audiences could handle more adult material when it came to animation. Fantasia was born out of the decline of Mickey Mouse. In the late 1930s Disney decided to feature the Mickey in a Silly Symphony animated depiction of The Sorcerer’s Apprentice , by Johann Wolfgang von Goethe and set to the orchestral piece by Paul Dukas which was inspired by the original poem. Disney enlisted Leopold Stokowski to conduct the Philadelphia Orchestra to accompany the short, but as the budget for the piece grew, it was decided that it should be a full-length feature incorporating other classical pieces set to animated sequences.

And that’s how Fantasia got weird, but also totally awesome. The film opens with Bach’s Toccata and Fugue in D Minor, accompanied by trippy abstract visuals. Blobs of color, shapes, shadows, lines, and anthropomorphic musical instrument components dance across the screen in time to Bach’s music. As film critic and historian Leonard Maltin wrote for the BBC, “Mainstream American audiences had never seen anything like it before.”

While the rest of the film is less transcendental, it's no less innovative. All of the musical moments are brilliantly rendered. The Nutcracker Suite becomes a ballet of flowers, fish, and fairies. Igor Stravinsky’s The Rite of Spring, a piece of music itself shrouded in controversy, having provoked a riot upon its premiere, is chosen to accompany a visual history of the origins of the Earth and the reign of the dinosaurs. The animators visited an astronomical observatory and drew with the input of Edwin Hubble, among other scientists. Bela Lugosi provided reference poses for the demon Chernabog featured in Night on Bald Mountain. Mickey Mouse’s red cloak, blue wizard hat, and inability to control water-welling broomsticks are remembered to this day.

Yet while Fantasia was hailed by critics as a masterpiece, it was a total failure at the box office. When it was re-released in 1969, it was promoted as a psychedelic experience for the hippie youths and counter-culture aficionados. Many viewers thought the animators must have been high as they created it, but as Maltin pointed out, “Animator Art Babbitt, who brought the dancing mushrooms to life in the Nutcracker Suite segment, remarked, ‘I myself was addicted to Ex-Lax and Feenamint’ – an over-the-counter constipation relief and a brand of chewing gum.”

Every generation seems to have its go-to set of Disney films. But as the 1969 reaction to Fantasia reveals, forgotten Disney films can be discovered by whole new sets of animation fans and classics can be appreciated anew. Fantasia made history; it was the first movie screened in stereo, using a new sound system Disney named "Fantasound." Its gorgeous artistic achievements went on to inspire parts of Dumbo, and its influences can be seen in other Disney animated films throughout the years. On this, its 75th anniversary, pop a bottle, or a barrel, of vino, and give Fantasia a second watch. I promise, it’s totally groovy.