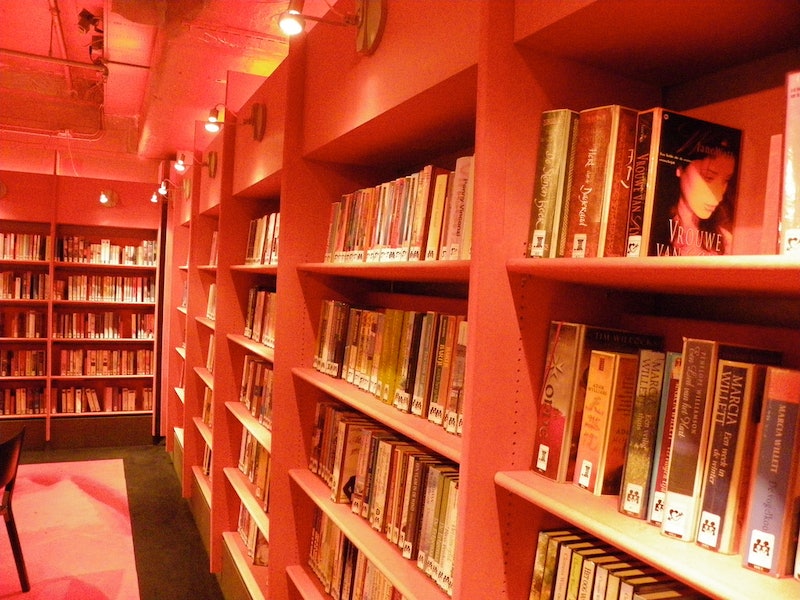 But there are some talented writers out there that have written successful and hot sex scenes. For the majority, though, there's really no winning when it comes to writing about sex — except for Literary Review's Bad Sex in Fiction Award, which isn't necessarily the best award a writer could receive. The one truly great thing to unrealistic, and badly written sex in books, is that it's hilarious to read.

He came again so hard that his dick wrenched out of her hand and a shot of it hit him straight in the eye and stung like nothing he'd ever had in there, and he yelled with the pain, but the yell could have been anything, and as she grabbed at his dick, which was leaping around like a shower dropped in an empty bath, she scratched his back deeply with the nails of both hands and he shot three more times, in thick stripes on her chest. Like Zorro.

I'm not sure what's worse: a body appendage leaping around or the idea of being shot in the eye by your own fluids. I'll let you decide.

I closed my eyes as well and moved inside her, imagining the ribbed flesh, the supple rings of muscle. Mauve and yellow flowers filled the blank screen of my eyelids, the petals loosening and drifting downwards on to smooth grey stone. I kissed the soft bristles in the hollow of her armpit, then I kissed the smaller hollow of her clavicle.

While this sounds like at attempt at being romantic with flower petals, it also feels completely fake. Also, I think sex scenes should skip the mention of any armpits.

3. Rescue Me by Christopher Tart

Her hand is moving away from my knee and heading north. Heading unnervingly and with a steely will towards the pole. And, like Sir Ranulph Fiennes, Pamela will not easily be discouraged. I try twitching, and then shaking my leg, but to no avail. At last, disastrously, I try squeezing her hand painfully between my bony thighs, but this only serves to inflame her ardour the more. Ever northward moves her hand, while she smiles languorously at my right ear. And when she reaches the north pole, I think in wonder and terror... she will surely want to pitch her tent.

The last line is my favorite of the whole passage, but I feel more like I'm reading Google Map directions to the North Pole rather than a disastrous sex scene. This is unrealistic in the sense that no body part should ever be compared to a childish concept of a red and white striped pole.

Her hair was piled high, but when she shook her head it came cascading down in a glowing wave over her shoulders, and fell as far as her knees. This rippling curtain did not cover her breasts which thrust their way through it like living creatures. They were perfect rounds, white as mare's milk and tipped with ruby nipples that puckered as my gaze passed over them. Her body was hairless. Her pudenda were also entirely devoid of hair. The tips of her inner lips protruded shyly from the vertical cleft. The sweet dew of feminine arousal glistened upon them.

It's impossible for a woman to have hair that falls down to her knees and not have it tangled in knots. Also, breasts described as living creatures is absolutely terrifying.

5. The City of Devil by Manil Suri

Surely supernovas explode that instant, somewhere, in some galaxy. The hut vanishes, and with it the sea and the sands — only Karun's body, locked with mine, remains. We streak like superheroes past suns and solar systems, we dive through shoals of quarks and atomic nuclei. In celebration of our breakthrough fourth star, statisticians the world over rejoice.

This was the most recent winner of Literary Review's Bad Sex Award. And as someone who uses astronomy and science in my writing fairly frequently, even this is a little much. When two people are getting it on, I highly doubt either one is thinking about rushing through quarks and atomic nuclei — unless that's your thing.

6. The Last Banquet by Johnathan Grimwood

In my mouth her nipple turned from strawberry to deep raspberry but the taste I wanted was missing. I had sweat and what had to be soap from washing her dress or herself. Reaching behind me, I found the Brie and broke off a fragment, sucking her nipple through it.

Sex is difficult to write because it's so physical, and it can often help to throw in some sensory descriptions to break up all the activity. However, in this case, it goes overboard. I can't fathom how one could suck anything through a fragment of Brie cheese.

7. The Shape of Her by Rowan Somerville

He grasped the side of her hips, pushed her away and pulled her to him with a slap. Again and again with more force and velocity. Tine pressed her face deeper into the cushion grunting into the foam at each thrust. The wet friction of her, tight around him, the sight of her open, stretched around him, the cleft of her body, it tore a climax out of him with a final lunge. Like a lepidopterist mounting a tough-skinned insect with a too blunt pin he screwed himself into her.

The problem here is that it could have been an OK sex scene, up until the last two lines. Climaxes being torn out of you and "mounting a tough-skinned insect" all sound highly unrealistic, as well as undesirable.

At this, Eliza and Ezra rolled together into the one giggling snowball of full-figured copulation, screaming and shouting as they playfully bit and puled at each other in a dangerous and clamorous rollercoaster coil of sexually violent rotation with Eliza’s breasts barrel-rolled across Ezra’s howling mouth and the pained frenzy of his bulbous salutation extenuating his excitement as it whacked and smacked its way into every muscle of Eliza’s body except for the otherwise central zone.

This passage was recently shortlisted for the Bad Sex Award this year, and I can see why. First the scene was playful, and then it turned violent within the same sentence. Not to mention barrel-rolling breasts and bulbous salutation.

9. The Hormone Factory by Saskia Goldschmidt

She was moaning softly now, her breath coming faster. She tasted of apples. Her soft warm flesh was driving me crazy – that dish of delight my tongue was now lapping at frenziedly. Her suppressed cries were coming faster and faster. I unbuttoned my pants, pushing them down past my hips, and my beast, finally released from its cage, sprang up wildly. I started inching my way back up, continuing to stimulate her manually, until the beast found its way in. She opened her eyes and said softly, "I'm still a virgin, please be careful."I kept myself quiet for a moment, kissed her and said, "I'll be very gentle, all right?"Running her tongue over her lips she nodded; she was as hot as boiling water in a distillation flask, and it wasn't long before I was able to really get going. We both came at the same time. I stayed inside her for a few seconds, gazed at her, and smiled.

The most unrealistic part about this sex scene is the idea of both partners climaxing at the same time, because simultaneous orgasms are incredibly rare. And that's without mentioning she's a virgin.

10. The Kindly Ones by Jonathan Littell

I was burning to lay this body down on the bed and spread its legs, to bury my nose in that moist vulva like a sow nuzzling for a nest of black truffles, then to turn the body over on its stomach, spread its buttocks with both hands to contemplate the purplish rosette of the anus blinking gently like an eye, put my nose to it, and breathe in.

If an anus is blinking at you like an eye, the first thing you should do is run away as quickly as possible. When it comes to unrealistic sex scenes, this 2009 Bad Sex in Fiction winner tops the charts.

More like this
16 Novels That Paint A Realistic Portrait Of Abortion
By K.W. Colyard
10 Must-Read New Books Out This Week
By K.W. Colyard
How To Be A Better Lover Inside (& Outside) The Bedroom
By Jessica Estrada
35 Sexy Texts To Send Your Partner
By Griffin Wynne and Carolyn Steber
Get Even More From Bustle — Sign Up For The Newsletter