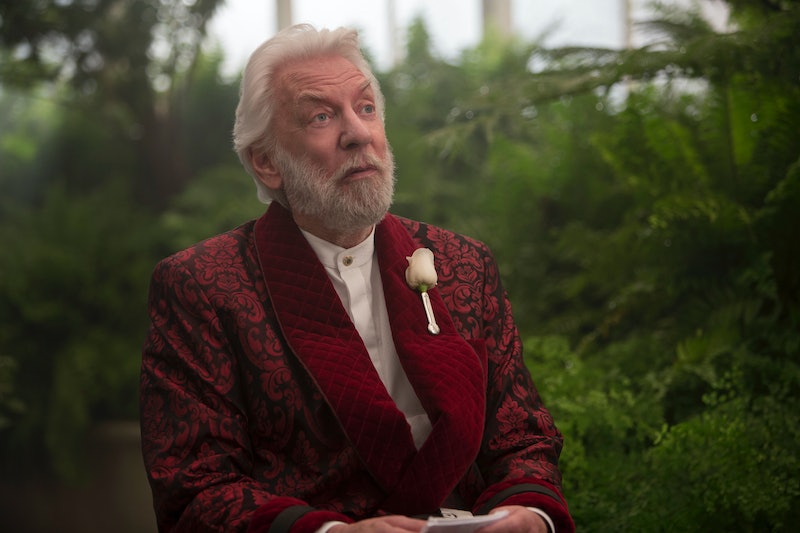 It's no secret that Katniss and President Snow aren't the best of friends in The Hunger Games series. I won't sugarcoat it: they hate each other. Then again, one wouldn't exist without the other. He is the yin to her yang. The Joker to her Batman. The Darth Vader to her Luke Skywalker. The Magneto to her Professor X. With such rivalry, it's almost certain that one of them would meet their demise at the end. True to the tradition of bad guys getting their due, does Katniss kill Snow in Mockingjay, Part 2 ? Spoilers straight ahead, so read at your own risk!

In the book, President Snow dies — but not at the hands of the Hunger Games heroine. I'm pretty sure that the movie will follow suit, to give the same satisfaction to those who haven't read the books. But first, some backstory: at the end of The Hunger Games: Mockingjay Part 1 , things are a mess. After rescuing Peeta (Josh Hutcherson) from the tortuous hands of President Snow (Donald Sutherland) and the Capitol, Katniss (Jennifer Lawrence) thinks everything is OK. But alas, Snow isn't going to make things that easy for Katniss and her crew. Peeta comes back frail and brainwashed, thinking that Katniss is the enemy. Snow has not only turned him against her, but turned the boy with the bread into a weapon. That Snow is one clever bastard.

The rivalry between Katniss and Snow is what gives the Hunger Games its intensity. It's a young, poor woman standing up to an older man who holds an unbelievable amount of power. The story started as a run-of-the-mill movie adaptation of a dystopian young adult novel and evolved into a pointed chess game between two strong, layered characters. It became a story about division of class, the sensationalism of media, and female empowerment. It started a resurgence of similar books and movies — but author Suzanne Collins created an original universe with the Hunger Games that cannot be duplicated (well, the Japanese movie Battle Royale came before it, but I'll save that for another post). For a young adult series, it's pretty heavy stuff — and it has a high body count. Which, by the end, includes President Snow.

My hate for Snow wasn't immediate. Sure, he gave off a bad guy vibe in the first movie, but his evil wasn't really established until Catching Fire when Katniss started a revolution as the "Mockingjay." From there, my hatred for him has been a slow boil, and it will come to head in Mockingjay, Part 2 when he and Katniss have their final showdown — although in reality, it's more like a tense encounter.

So what, exactly, goes down? Well first of all, Prim dies. She was part of a medical team sent out to help a group of children, but while doing their job, an aerial attack bombed them and killed everyone. Katniss thinks that the Capitol is responsible for this, and obviously, she is furious. Snow is convicted of his crimes and sentenced to death after the Capitol is overthrown, and Katniss is the lucky one that gets to execute him. Yet before her big moment, Snow lets her in on a secret: President Coin dispatched that aerial attack that killed Prim. Katniss is being used, so that Coin can take over once she and Snow end up killing each other, presumably.

When the big execution is about to happen, Katniss draws her bow and is about to kill Snow, but then she thinks about what he said. She changes her target and kills Coin instead. Snow also dies, either from choking on his own blood or being crushed by a stampeding crowd. I would say that they all live happily every after, but that would be a little morbid — and who am I kidding? Snow and Coin were horrible people. Their deaths are as satisfying as Joffrey's in Game of Thrones.