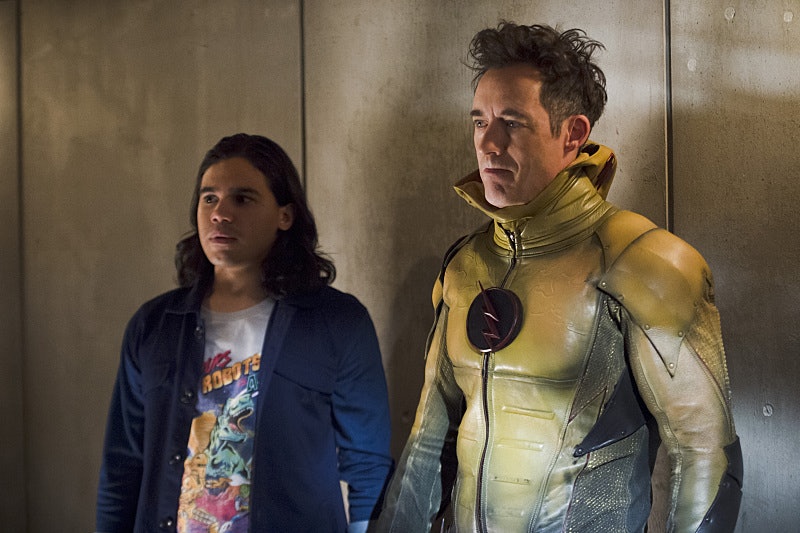 Is this really happening? Is The Flash really making me care for Harrison Wells again — after everything we've been through? I don't know about you guys but Earth-2 Harrison Wells (referred to from here on out as Harry to distinguish) gave me some serious feels this week as he tried to act like Earth-1 Harrison Wells, which only highlighted their differences. After making his escape in Season 1, everyone's favorite genius telepathic gorilla was back in Central City as Grodd took Caitlin hostage on The Flash. It turns out that Grodd has actually been getting more intelligent, and is now lonely and ready for company. He takes Caitlin because she has always been nice to him (aww) and because he has stolen enough materials for her to create more animals like him. Long story short: he's lonely and wants a friend (double aww).

Unfortunately he is killing people to make this happen, which undercuts the sweetness. The whole team rallies to find a way to save Caitlin, but everything is difficult after Barry's run in with Zoom. Physically he has healed, but he's having trouble accessing his speed thanks to some mental blocks. Harry steps up and dons a spare Reverse-Flash costume to rescue her as Cisco helps him nail the sincere-yet-creepy Wells way of speaking. He almost has Grodd convinced, until he says something that Wells would never dream of uttering: "Let her go. Please." It's a move that almost gets them both killed, though he rallies and they both escape. Harry pulls through again, creating a device that can transport the gorilla to a sanctuary on his planet. They manage to get him through the portal but Grodd will escape Earth-2, you mark my words.

We see Grodd land alive and well in a lush jungle, which Harry promised was filled with animals like him. It seems they have an entire civilization set up, and I'm pretty sure this will just make Grodd more powerful. This is an alpha and if he rallies together an entire army of meta-gorillas, who knows what havoc they will wreak? We haven't seen the last of Grodd, and I for one hope the S.T.A.R. Labs team is better prepared when he returns, because he is furious with all of them now.