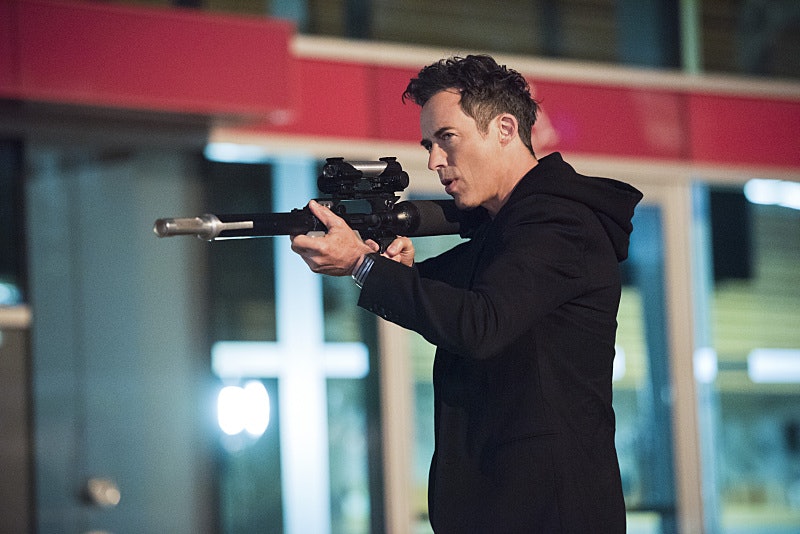 It's almost like we The Flash viewers are the ones time traveling, looping right back to Season 1 and asking ourselves, "who is Harrison Wells and can we trust him?" The answer back then was no, and the answer now is most likely still no. Jay Garrick doesn't trust him, and I don't trust him. He's pushing Barry and the whole team as hard as the first Wells ever did, dead set on getting Barry to defeat Zoom. We know that Zoom has taken Harrison Wells' daughter hostage, and thanks to some Vibe action, we also know that Zoom is busy trying to figure out why Wells is hiding out on Earth 1 rather then returning back to Earth 2. On the surface, his motives seem clear and (in strange way) sweet, turning to a superhero to save his daughter's life. However, nothing is ever that straightforward — especially when Harry is involved — and the man is clearly hiding something. So it really makes me wonder, is Wells working for Zoom on The Flash and trying to kill Barry?

Let's take a look at the facts. Wells refuses to let Cisco touch him, paranoid that he will use his Vibe powers and see something he shouldn't. It doesn't make sense to hide Jesse's kidnapping from the team — if anything, that might make them trust him more. It's possible that he is trying to keep everyone from finding out that he created Zoom, but Garrick already blew that wide open. Maybe it is that Wells doesn't want people knowing how exactly he did it, but I think it is far more likely that he is trying to hide his relationship to Zoom. They've already accused him of being sent by Zoom, but he brushed them off by saying he needs the masked man dead too. A simple answer, but not a terribly believable one.

Wells could have warned Zoom of the plan beforehand, giving him the upper hand in the fight and a chance to humiliate Barry in front of all of Central City. Zoom had every chance to kill Barry and chose not to, and I'm sure we'll find out why soon enough. Like with any good Wells mystery, we won't know for sure until things get a lot worse, but I for one hope the S.T.A.R. Labs team stops being so trusting and starts protecting themselves against everyone who comes through the portals — even those who say they are there to help.