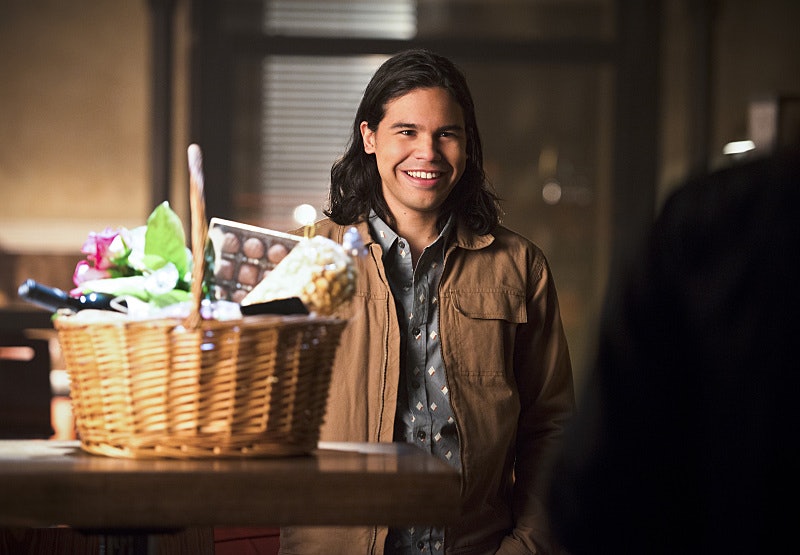 Cisco, I just want you to be happy! I feel like that's not so much to ask, but I am a little worried about where his new relationship is heading. After some adorable flirting and false-starts, Cisco and Kendra started dating on The Flash. Unfortunately Cisco/Vibe is learning the same lesson that Barry/Flash did when he first entered the hero game: it is super hard to have a social life when you're always saving the city. While on their date, Cisco vibes Kendra as Hawkgirl, and abruptly leaves. Not the smoothest move, but to be fair, Grodd showed up almost right after. Talking to Caitlin about his vision, he wondered if maybe the winged woman was an angel.

After Cisco helped the team (including a suspiciously helpful Wells 2.0) get Grodd to a meta-animal sanctuary on Earth-2 he went full Say Anything, waiting for Kendra outside of Jitters with flowers and chocolate. They continued being adorable but before they went up to the roof to watch Princess Bride (aka my new dream date), they picked up right where their first date left off, and kissed. Of course, Cisco vibes again, this time seeing Kendra decked out in her Hawkgirl outfit. The vision lingers over her eyes and smile and it seems like enough information to clue Cisco in on the fact that he is now dating the possible angel. When Kendra notices he's gone all vision-face he chalks it up to her kissing skills and her smile is so, so sweet.

I am fully on board with Cisco having an active love life — no one deserves it more then he does. But we already know that Hawkgirl has a very complicated history with Hawkman, and both are taking off for Legends of Tomorrow soon. So this whole thing has me worried that Cisco is just going to get his heartbroken, and that's more sadness than I can deal with from The Flash. With any luck, the Golden Glider will come back soon to sweep him off his feet.