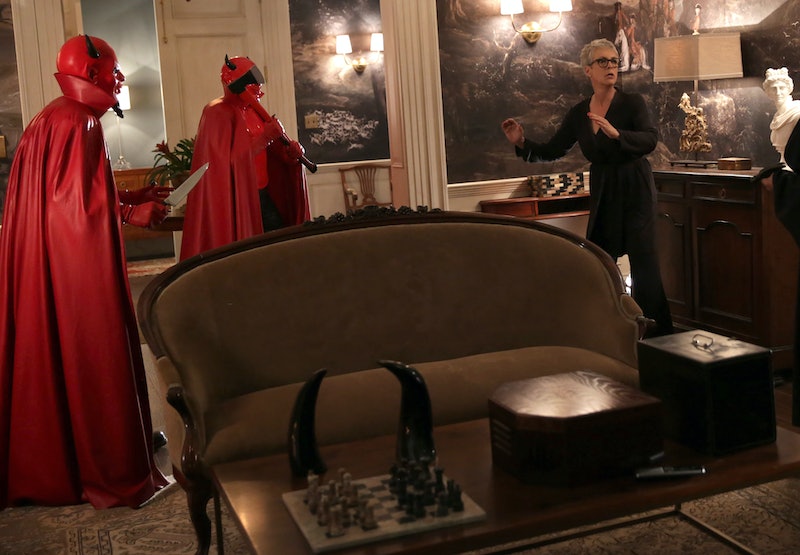 Remember when Gigi, Boone, and the other Red Devil were happily in cahoots and all was going according to (revenge) plan? Well, those days are officially over and one Red Devil killed Boone on Scream Queens — so now he's actually dead (we think) — and somehow, I don't think he'll come back as a ghost dressed in a shirt made of "boyfriend material." When the two Red Devils met up with Gigi in the Nov. 17 episode "Ghost Stories," they had agreed to axe her, but then Boone was double-crossed, and it turns out, by his own sibling. The other Red Devil is apparently Boone's sister, and while he was busy distracting Gigi so his partner in crime could creep up and attack her, the Red Devil chose to stab Boone to death. Now the team is down one person, because the course of a revenge-motivated alliance never did run smoothly.

We knew that Gigi and Boone were equally displeased with one another, but it's been tough to gauge what the other Red Devil has been thinking because, you know, they can't talk onscreen and betray their identity to the viewers. Although last week Boone's phone call indicated that perhaps Gigi wasn't the person calling all the shots, that was disproven this week. Firstly, Gigi said this revenge plan was "20 years in the making" — which means it was her idea. When she informed Boone that he's the weakest link, he began a lengthy rant about playing by her rules and doing everything from pretending to be gay to going undercover as a Dickie Dollar Scholar. After Boone declared that he's "done taking orders from you," his rant got cut off by a knife in the back.

There's been some speculation among fans that Gigi is actually the bathtub mother and she didn't really die that night — but we now know that's not the case, because Boone asserted "you're not my mother" before his death. Gigi looked pretty nonplussed when he was murdered in front of her, and turned to the Red Devil to tell her that "your commitment to revenge is clearly great than your brother's was." Earlier in the episode, Dean Munsch told Grace that twins were in fact born in the Kappa House on that fateful night — first a girl, and then a boy.

It's safe to assume that Boone was the boy — but who the heck could the girl be? Well, it would have to be someone cold-hearted enough to kill their own sibling, so Chanel definitely comes to mind, although none of the Kappas are exactly friendly. And, if Gigi isn't the Kappa who was left to die by her sorority sisters, what exactly is her motive? After all, she has dedicated 20 years of her life to plotting revenge. It seems likely that Gigi was the brunette crying and holding the baby girl in the premiere's opening scene — and presumably she was friends with Sophia and hasn't recovered from the trauma of watching her friend die.

If Gigi was indeed a Kappa at Wallace, Dean Munsch would have known her because she aided in the cover-up. Did Munsch simply not recognize Gigi when she returned to campus? Or, was Munsch initially involved in the revenge plot before some sort of falling out occurred between her and the Red Devil team? After all, we know she hates Kappas and is capable of murder. Every time we get one answer on Scream Queens, countless new questions arise.