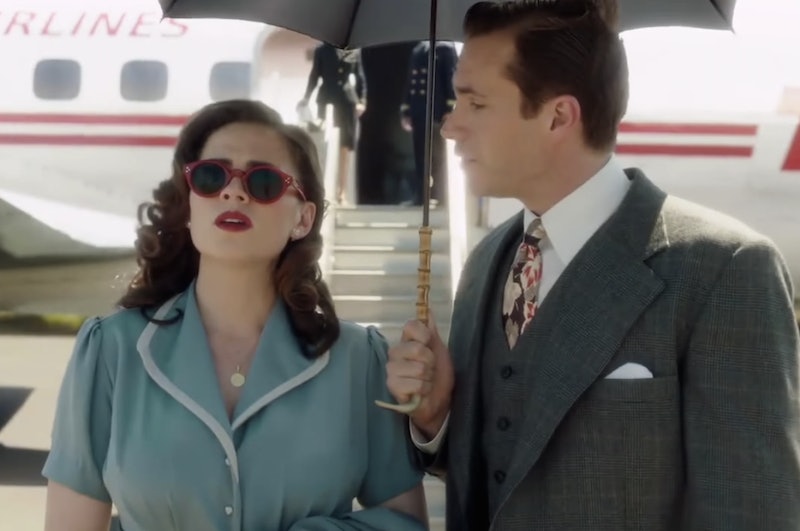 I'm an unabashed fan of Agent Carter, the show that took Peggy Carter from being, to me, a character who needed more fleshing out in Captain America: The First Avenger into being a badass superhero so amazing that she made Captain America look like a boy who got everything special about him from a bottle. (Are those Tony Stark's words coming out of my mouth? Whoops.) The Agent Carter Season 2 trailer debuted during Tuesday's episode of Marvel's Agents of S.H.I.E.L.D., and it looks like it's going to continue the legacy of epicness that Peggy launched in the short first season, alongside the same faces that we fell in love with (or raged at our television screens at). However, it also introduces some new faces, mostly in the form of a new romance with Jason Wilkes — a man of color. Can I get a heck yes?

Wilkes is played by Reggie Austin, who has been described in casting as "a quirky yet charismatic scientist who instantly charms Peggy." Season 1, for all it made a point of attacking sexist stereotypes and establishing Peggy as a hero in her own right not a hero despite being a woman, had a marked lack of people of color. Which was true to the time period, sure, considering the 1940s were an even worse time for people of color than they were for women in general. However, it seemed outright strange that a show that focused so much on combating stereotypes and rising up the underdog would completely neglect any mention or reference to the struggles of the true underdogs of that era. Season 2 seems to be fixing that with a romance between Jason and Peggy, two people who can no doubt bond over being overlooked and beaten down by society, and I'm totally here for it.

However, that's not the only amazing part of the trailer. Check it out below.

And then skip your way through these eight awesome moments that will have you counting down the minutes until Peggy makes her triumphant return to our TV screens.

As a person, she's already the coolest. Add some sunglasses to protect her from the California sun, and she's suddenly ice cold.

Here's hoping he spends the entirety of Season 2 making up for the fact that he treated Peggy, as she herself said, like a "daft whore" last season. Peggy might have forgotten by now, but I haven't.

3. Peggy Still Has All The Fancy Hats

Seriously, can we get a spinoff show that's just about her hats?

4. People Are Still Up To No Good

Unless this is a movie or something, but, honestly, a movie set is where I would choose to hide my nefarious plots since everyone would just think it was Hollywood magic at work.

6. Peggy Being The Smartest Person In The Room

7. But Also Making Time For Her Girls

Whether that's the back of Angie's head or the back of Dottie's, Agent Carter has never been a show that fails the Bechdel Test.

8. Peggy's Still The Baddest Of Them All

She's still a one-woman army, and I love it. Is it January 5 yet?