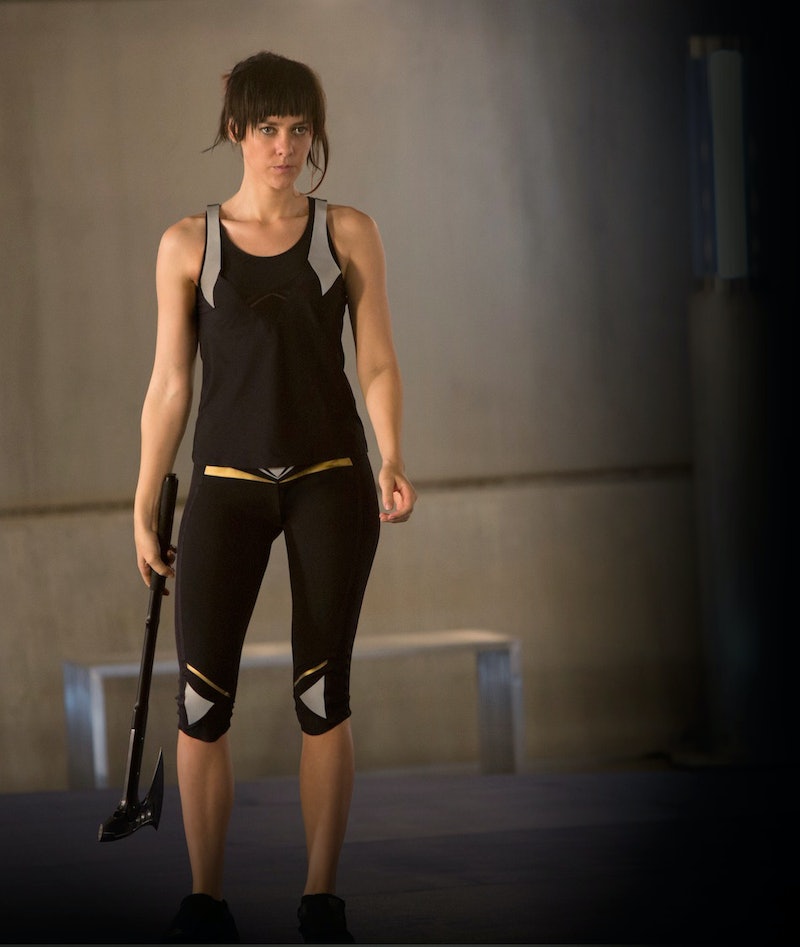 We've almost got all our bases covered, Mockingjays. The Hunger Games: Mockingjay, Part 2 opens in theaters on Nov. 20, and leading up to that date, I've been dishing on the end games of your favs (and even the folks you don't think about as much), according to the books. We know what happens to Haymitch and to Katniss' mother, Mrs. Everdeen, and we're continuing down this long, twisting road by talking about another favorite (and overall great) character — the sassy Johanna Mason (as portrayed by Jena Malone in the movies). So what happens to Johanna in Mockingjay, at the very end? Read on to find out — but beware, spoilers ahead!

As fans will recall, Johanna was the female victor of the 71st Hunger Games. Homegirl hails from District 7, which is all about wood, which makes her some sort of fierce lumberjack queen. She was able to survive her bout in the Hunger Games by pretending to be weak and helpless, when in reality she was manipulative and ruthless (as you need to be in order to be, you know, not die). She first meets Katniss, however, during the 75th Hunger Games aka., the Third Quarter Quell, where the cruel plot twist was that victors from previous Hunger Games were reaped to participate once more.

Johanna manages to make quite the first impression on Katniss (and Peeta), by stripping out of her tree costume (which she complains about not being a fan of), in front of the two — mostly to tease Katniss, who was then viewed as the "purest" out of all the Tributes, as Peeta later explains to her. But as it turns out, Johanna isn't just a mean girl out for Katniss' blood (though she does do very mean girl things, like slap Katniss). She actually does our hero a major solid (even if Katniss thinks it's just a plain ol' murder attempt at first) at the end of Catching Fire, knocking her out in order to cut out the tracker implanted within her by the Capitol. When the arena gets destroyed, as we all know, Katniss is able to make it out with with the rebels of the underground District 13.

However, Peeta and Johanna are among the few who get captured and tortured by the Capitol. Moving onto the events of Mockingjay, in the aftermath of Peeta's torture, he gets hijacked by the Capitol and makes Katniss out as a target to kill. Johanna, however, during her time at the Capitol, gets soaked in water and electrocuted — which I imagine is about as bad as it gets. Our lumberjack queen totally did not deserve this!

Fortunately, she's one of the few that get rescued from the Capitol during the District 13 rescue mission. When Katniss sees her again, it's obvious to her the amount of pain the other has gone through — Johanna is sickly in appearance, covered in scabs, and bald. She later tells her that she and Peeta are pretty chummy with one another on account of recognizing each other's screams while being tortured in the Capitol. Yikes. And while Johanna wasn't all that close with Katniss before, the two develop a bond when they become roomies and start training for the rebellion together (which is so much yes because I am all about women supporting other women to take down tyrannical governments).

However, Johanna is ultimately deemed unfit to take part in activities of the rebellion — her psychological scars are just too deep. Her torture in the Capitol gave her an immense fear of water. In the book, during a test where the streets were flooded to see her reaction, she breaks down. She also stops taking regular baths. Before Katniss goes into the final battle, she gives Johanna a bundle scented with pines to help remind her of her home, District 7. Johanna then makes Katniss promise her that she'll kill President Snow. It's a promise Katniss fails to keep, as she decides to kill President Coin instead, in revenge for the death of her sister, Prim. After the events of the rebellion, it isn't stated what happens to Johanna — she's last seen voting yes at a roundtable with other victors to see if whether or not a special Hunger Games should be held for the children of the Capitol. With that said, it's time for a round of speculation!

It's revealed by Haymitch that President Snow had Johanna's family killed because she refused to give into his plans to make her into a prostitute (yet another reason to hate President Snow with every fiber of your being), so it's not as if Johanna has a family to return to in District 7. However, she does seem fond of her home, as proven by how much she appreciates Katniss' pine gesture. I can see Johanna returning to District 7, but of course, she still carries the burden of her psychological wounds. Ideally, she would seek treatment and work toward overcoming the pain of her past. I'd also like for her and Katniss to keep in touch — maybe even visit each other every so often and have their supportive duo continue. However, given Johanna's strong personality, I don't know if she can ever come to forgive Katniss for breaking the one promise she held her to. In the grand scheme of Hunger Games end games, while Johanna does live, we'll never know if she finds true peace.