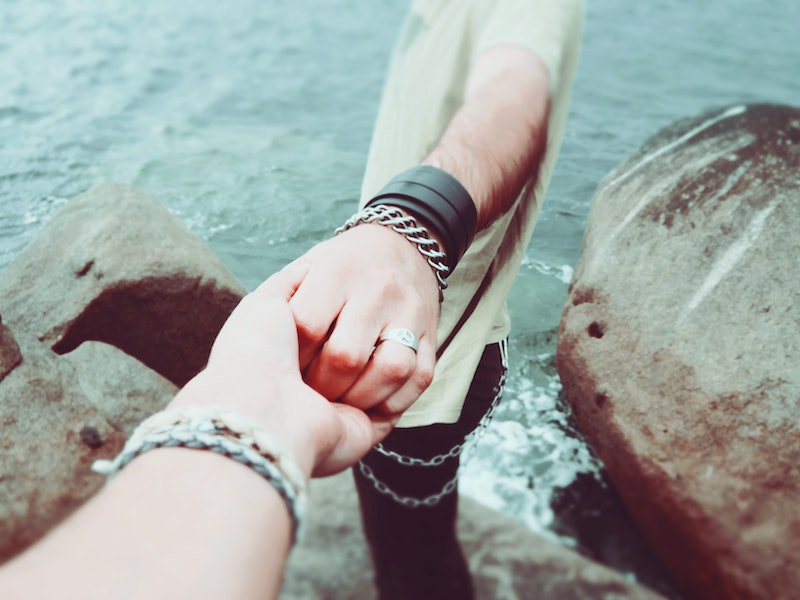 Dating today may be complicated, but dating in the '90s came with its own breed of confusion. In fact, there exists a whole host of '90s relationship problems that make no sense today. Whether you blame it on the advancement of modern technology or chalk it up to a change in the way couples communicate in general, it's undeniable that dating in that most beloved of decades was dramatically different from the current dating scene.

I mean, c'mon, can you imagine if we had Tinder's algorithms back then? Perhaps it would have helped me immediately recognize the laughable incompatibility I had with more than one swoopy haired Lothario — as opposed to suffering through weeks of hand holding and hanging out after school before realizing how mismatched we truly were. (Admittedly, our clashing flannel should have been a clue.) Of course, for all its issues, dating in the '90s had its virtues, too. It was a simpler time, after all. For the most part, we only had to figure out how to not be a bumbling idiot around our crushes in-person, whereas daters today have to navigate the sub-textual nature of social media. And, let's be real, many a relationship has gone down in flames due to Facebook drama.

So, for nostalgia's sake, let's take a look at eight relationship problems no one dating today ever has to deal with ever again.

1. Calling Your Crush On Their Home Telephone and Freaking When His or Her Mom Answers

What do you say? How do you identify yourself? Does she even know about you? How many times can you call and claim "Wrong number!" and still sound convincing? DOES ANYONE KNOW?! Some of the most awkward conversations in history had to have taken place in the '90s due to the sheer ratio of phone calls to crushes answered by nosy and/or disapproving moms.

2. See Also: Having to Leave a Voicemail On Your Crush's Home Telephone

Because landlines were modus operandi in those days, you had little choice but to abide by their rules when you couldn't reach your crush. Instead of hammering out a quick "Call me back" text, you had to stammer the words out via voicemail — presumably for his or her's entire family to listen to and laugh at around the dinner table. At least that's what happened in your head.

3. Figuring Out the Perfect Song to Dedicate to Your Crush on the Radio

In the '90s, there were few romantic gestures that could compete with calling into you and your crush's mutually favorite radio station and dedicating a song to them. Logistically, of course, this was a nightmare. In addition to narrowing down the song, you had to time it perfectly so your crush would actually be listening. Still, it was sweet. Wait, why isn't this still a thing?

4. Trying to Cancel Plans at the Last Minute

A family emergency has come up, and you won't be able to meet your crush at the mall after school. Only, unless your after school extracurriculars included training carrier pigeons, you had no way to reach said crush to tell them you wouldn't be able to make it. You try to call their home phone but, alas, they are already on their way. Woe to the person who has to apologize for standing their significant other up at the food court.

5. Deciphering Your Crush's AIM Away Message

Hey, cut us some slack — we were only just beginning to navigate the world of online communication in the '90s, which left a lot of room for errors in interpretation. And nothing stung (or confused) quite as much as getting the passive-aggressive "diss" by your crush's AIM away message. He's home; he's supposed to be chatting with you; so what's with the rebuff? Hold on, did I just get dumped via instant message?

6. Agonizing Over Whether Your Crush Will Kiss You During a Slow Dance

This is it. Sixpence None the Richer's "Kiss Me" starts playing, and your crush asks you to dance. You couldn't feel more like Rachel Leigh Cook waiting for your Freddie Prinze, Jr. to make his move. But will he? And, if he does, which way should you tilt your head? You want this moment to go down in history as the most beautiful slow spinning make-out session ever, so the pressure is intense.

7. The Struggle To Have a Private Conversation with Your Crush

Back in the olden days before everyone was slinging iPhones like digital sharpshooters, we couldn't simply take our smartphones into a private corner to gush to our crush. The way I see it, you had two options. You could stretch your home phone cord so far it might actually bend the space-time continuum in order to hide in the hall closet, or you could spend your entire evening battling your mom about hogging the landline by using dial-up to engage your crush in comically slow flirty banter. 'Cause unless you were Kelly Kaposwki, you probably weren't lucky enough to have a phone in your room.

8. Deciding Which Movie to See On Your Date

In the grand scheme of '90s dating issues, this may be the most first world of the problems. But, still. If you dated in this decade, you undoubtedly know the frustration of having to hunt down a newspaper, thumb through the sections, find the entertainment section, pinpoint the closest theater, and then peer at the teeny-tiny print to determine what movies were playing and — break out the magnifying glass — at what time. The days before Fandango were basically the dark ages.