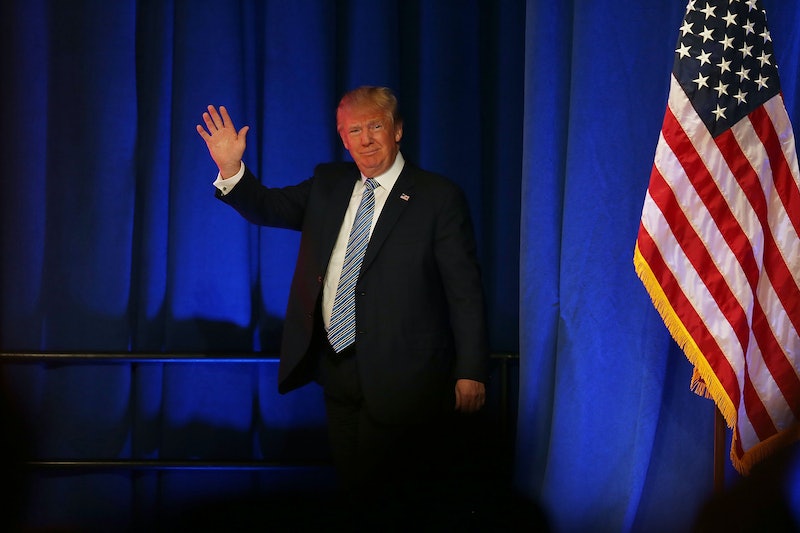 Remember that time you thought you had nothing in common with Donald Trump, and then Trump skipped the line at an Adele concert, and you had to come to terms with the fact that you two are one and the same in your love for Adele? I remember that moment, because it happened to me just now. Up until this point, I had reveled in the fact that, if Donald Trump and I ever found ourselves across a speed-dating table, the most common ground we'd find was "I eat food to live" and "I also eat food to live." But now I'm faced with the reality that, if I didn't have my guard up, we might accidentally bond over the video to "Hello," or how underrated "Make You Feel My Love" is. Curse you, cruel world!

Adele had a concert at Radio City Musical Hall on Nov. 17, and who should come crawling out of the presidential campaign to come attend it but the Donald himself? And, because he's a fancy boy, he got to skip ahead of the line of hundreds of people. This makes me resent him not only for his sense of entitlement, but also because I'm — can this be? — jealous of Donald Trump. He's never done anything before that's made me imagine being in his shoes for even a second, but getting ushered into an Adele concert without having to wait in line? That I would take. It doesn't make me feel good to admit this but, in that moment, we were all Donald Trump.

But, as devastating as this new knowledge is, I think the important thing is at the end of the day, Trump can't Trump me out of liking Adele, no matter how many lines he skips or how much he rubs my nose in the fact that I wasn't even at her concert. I love this woman for keeps, and, if Trump wants to try to shoulder in on that love, he's welcome to try; there's more than enough to go around, even for someone like you. (See what I did there?)