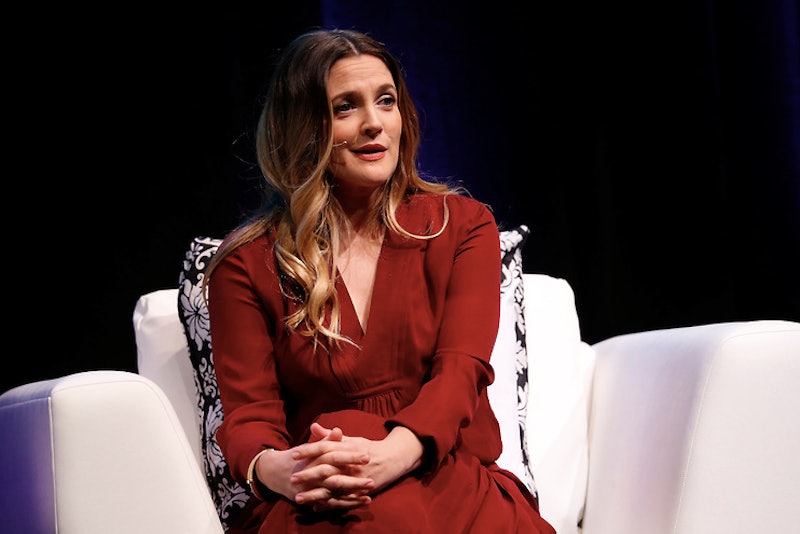 Ever since she was 6 years old, Drew Barrymore has been in front of the camera. She got her start in Steven Spielberg's E.T. The Extra-Terrestrial and has since starred in dozens of roles, from Never Been Kissed to He's Just Not That Into You to Charlie's Angels. In addition to acting in movies, Barrymore produces them. Back in the '90s, she started a production company called Flower Films with one of her best friends Nancy Juvonen, and recently embarked on more business ventures — including creating a line of beauty products and writing an autobiographical book called Wildflower . Essentially, she does it all. To share her entrepreneurial wisdom, Drew Barrymore joined SELF magazine and Fidelity Investments for an event called Empowering Conversations: So You Want To… on Tuesday night in New York City. Beforehand, Barrymore sat down with Bustle to talk about the women who inspire her and why it's important to support one another along the way.

When asked about dealing with any pressure to compare herself to other women or view fellow actresses as competition, Barrymore gave the perfect response. "Never!" she says. "There’s enough to go around for everyone. I am here as a champion of [the idea that] we have to support each other."

And guess what? This isn't a recent realization; the 40-year-old actress figured this out early on. She explains,

I’ve been doing this since I was so young and when you’re so young, you really have to figure out what kind of person you’re going to be, especially when you’re in an occupational environment. At 6, 7, and 8 years old, you’re like, "OK, how am I going to look at my fellow peers in the work place?" And it was just a very conscious decision to really believe that if we’re good to each other and love each other, then it’s a much better process.

These are wise words! I think most people (myself included) can learn a thing or two from Barrymore's positive mentality. While it is easy to get caught up in comparisons, being uber-competitive doesn't actually accomplish anything productive.

Taking her support of women a step further, Barrymore recently posted a series of photos on Instagram with the hashtag #AmazingWomenWeek, where she featured everyone from her mother to Ellen DeGeneres, along with her best friends, mother-in-law, sister-in-law, and more. Explaining the purpose behind this movement, the actress says,

I had a book [Wildflower] and a film [Miss You Already] coming out that were both such celebrations of life and love letters, particularly to women. It wasn’t planned for them to come at the same time. It was a serendipity ... and I just felt inspired. I love women so much, and I love men so much, but I just felt like it was a good time to acknowledge the women that have moved me so much.

What better reason to acknowledge strong women? Not that there ever needs to be a special occasion to do so, but this is especially poignant, since Miss You Already focuses on female friendship. As far as who she included in her pictures, Barrymore says, "They’re all over the lot. In age, occupation, how long I’ve known them, how deep I know them, how personal the relationship is." Because there was so much love to spread around, #AmazingWomenWeek actually went on for several weeks.

Asked why it's important for women to stand up for themselves in their careers, especially in predominantly male industries, Barrymore had even more awesome advice. Focusing on a collaborative effort, she says,

If you support each other as women, you’re so much stronger. Your voice ultimately will become one of a sea of voices, and it could be a small sea or a large sea, but I think women who stick together and truly help lift each other up become so much stronger and louder for it.

Echoing this same idea of raising your voice, Joyce Chang, editor-in-chief of SELF, shared equally wise words before the Empowering Conversations event. "I think women have a lot to say," she explains. "Having a strong sense of self is the thing that drives you to be whatever you want to be, so that's why it’s important to speak up in your career and take ownership for what you want, because no one else is going to do it."

Barrymore definitely falls under the category of having a strong sense of self; and both of these women are right — all of us are so much stronger when standing up for ourselves and the fellow females around us.