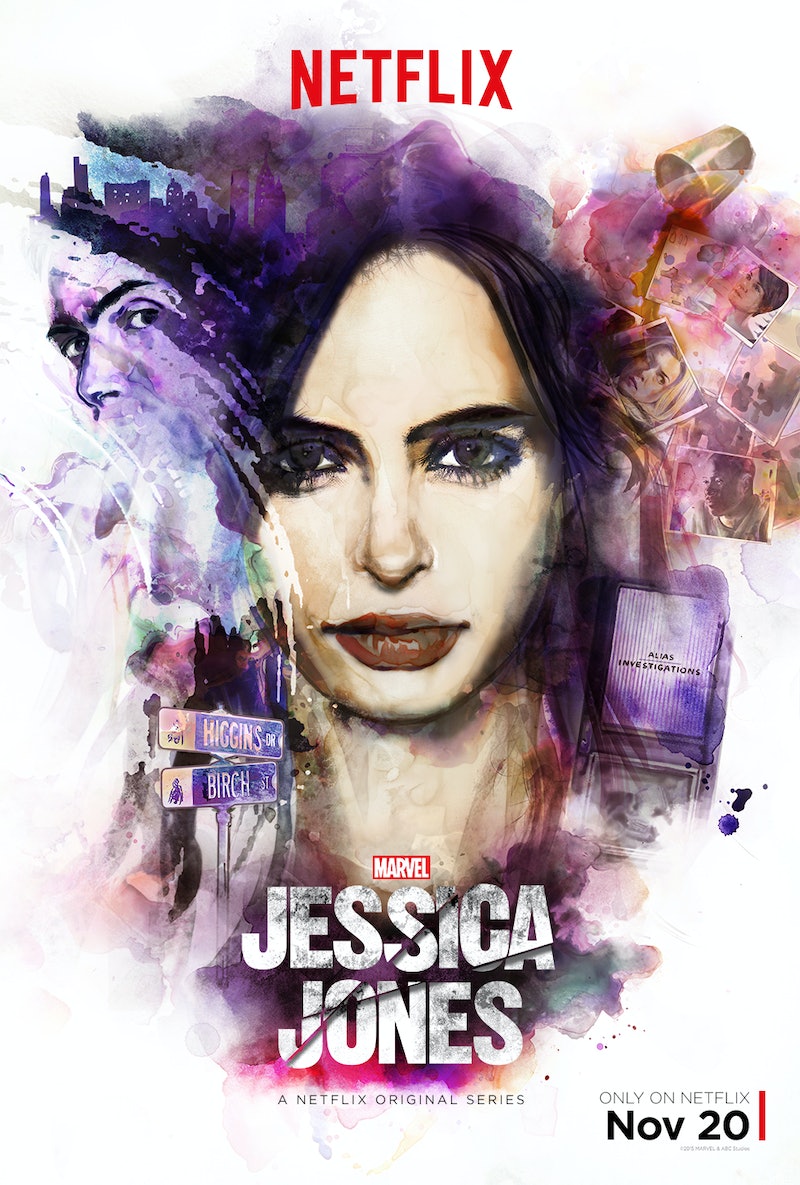 Netflix kicked off its dark Marvel superhero universe last spring with Daredevil, and the next series to join the Devil of Hell's Kitchen is the highly anticipated Jessica Jones. Before all 13 episodes debuted on Netflix, fans were treated to teasers featuring the titular superhero's super-strength, her very close relationship with whiskey (who can blame her), and her burgeoning (albeit troubled) romance with Luke Cage. While the trailer used a perfect song, Of Monsters and Men's "Thousand Eyes," and artwork reminiscent of the original Marvel Comics, the Jessica Jones opening credits employ different music and imagery that also help set the series' tone.

The music of the credits perfectly establishes Jessica Jones as a gritty, stylistic drama starring a private investigator — kind of like an older Veronica Mars, if she had superpowers and a dark past that included mind control. For the score, Sean Callery composed the opening theme, according to his website. You've probably heard his work before, since he's contributed to a bunch of hit shows, like 24, Medium, Bones, Elementary, and Homeland. The soft jazzy lead-in of the Jessica Jones theme song, paired with the exciting ramp-up, captures the noir detective drama inherent in the show, while also establishing that this is a Marvel series — as if anyone could forget — and there will, of course, be some thrilling action.

As for the credits' visual design, it may remind you of the original Jessica Jones Alias comics from the early 2000s. That's because they were created by the same artist, as ComicBook.com reported that David Mack designed the opening credits, lending the sequence his painted, collage-like style. It was his artwork that graced the covers of Alias #1-28 between 2001 and 2004 — the comic series that Jessica Jones is inspired by. This same style was also used throughout the Jessica Jones teasers and posters, giving everything that simultaneously messy and beautiful quality.

The opening credits serve as a way for Jessica Jones to honor and connect to the comics, as pointed out by Alias writer Brian Michael Bendis when he told ComicBook.com, "David Mack’s covers are an essential part of the show’s DNA. With his work featured on the show’s credits, these covers will be the visual connection between the graphic novels and the show.” Sharing the same visual artist across the comic books and the Netflix series was a fantastic idea to maintain the Jessica Jones tone. It's just a bonus that the artwork is also absolutely gorgeous.

Between the design and the theme song, the opening credits work perfectly to introduce viewers to the noir-esque tone of the private eye series, while offering an aesthetically-pleasing minute-long intro — one that I won't mind watching at the beginning of each of Jessica Jones' 13 episodes.