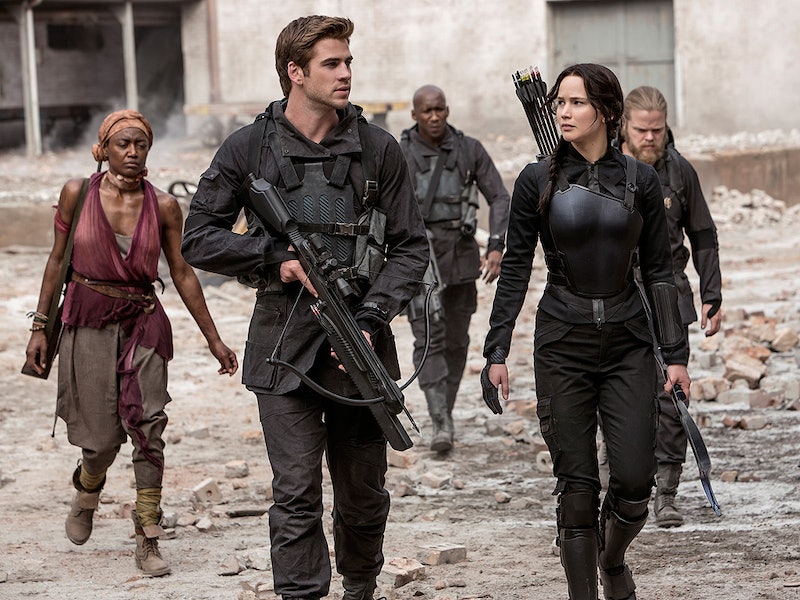 One of the nice thematic consistences of The Hunger Games series is that all the threats that Katniss and her people face are man-made. When audiences and readers meet the Girl On Fire in the first book and movie, she feels the most at home and in her element when she's out in nature. The menace arrives when humans bend nature to their will, and the most chilling example of that is the existence of "muttations," or "mutts" for short. Katniss learns about the Capitol's genetic engineering of animal hybrids in her first Hunger Games competition. The mockingjays themselves were bred partially from hybrids (i.e. the jabberjays, which were created for surveillance purposes); she also deals with venomous tracker jackers and those horrific wolf mutts, who — in the novel — resembled her dead competitors. And the mutts in Mockingjay, Part 2 , that attack Katniss bring on deadly results for members of her squad. What should you expect, based on the book? Spoilers ahead!

Some muttations serve a distinct purpose, like the jabberjays and their ability to parrot back human speech. But as Snow and the Capitol citizens behind the games becomes more and more alienated from their humanity, the mutts become less strategic and more violent. They're intended to cultivate terror. Some of the effect of the wolf mutts is lost in the first Hunger Games movie, in my opinion, as in the Suzanne Collins novel but not in the film, they're also a tool of psychological warfare. In the book, Katniss sees human eyes — eyes that she knows — in the creatures, and it throws her off any game she has left. In the movie, the mutts look more like giant, rabid dogs. Still powerful and deadly, but less gruesome.

If you're sharp-eyed, you may have caught a glimpse of the reptilian muttations that Snow sends after Squad 451 in the Mockingjay, Part 2 trailer. See if you can spot them around 1:43.

Yikes, right? The trailer doesn't give too much away, saving the head-on scare for the movie. But the creatures' description in the novel is already terrifying enough.

They are white, four-limbed, about the size of a full-grown human, but that‘s where the comparisons stop. Naked, with long reptilian tails, arched backs, and heads that jut forward. They swarm over the Peacekeepers, living and dead, clamp on to their necks with their mouths and rip off the helmeted heads.

Again, the elegance and the procedure are gone. These are mutts that are basically just killing machines. They can't or won't distinguish between sides, and take out Capitol Peacekeepers and rebels alike. The lizard mutts do reflect Snow's personal vendetta against Katniss in two pieces of design: first, they give off the same odor of roses and blood as the man himself, and second, they've been trained or programmed to hiss her name. That's a lot of trouble to go to just to get under the skin of one young woman. It's almost flattering, isn't it? Except, no. No, it's not.

Based on their literary description, I'm counting on the lizard/human hybrids in Mockingjay, Part 2 to be the most pee-your-pants scary in the entire series.