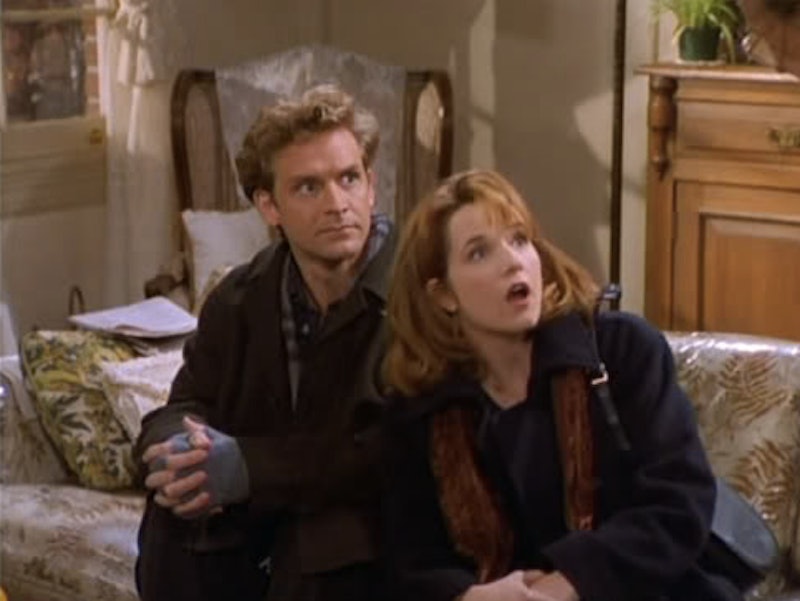 Ah, the '90s, the decade no one seems to be able to get enough of. There is nostalgia for everything those halcyon Clinton era days brought with them, from the fashion to the Beanie Babies, but there is nothing from the '90s people miss more than the TV. That's why Girl Meets World and Fuller House exist — because letting go of the comfort of '90s TV shows is not a thing anyone is prepared for. Not every show can be as beloved as Friends though, and there are lots of '90s shows you definitely forgot existed.

Do you remember the dating show Singled Out? How about the show that introduced the world to Ryan Reynolds and Nathan Fillion? Did you ever ship Caroline and Richard? Chances are the answer to those questions is either "no" or "vaguely." That's OK, even the most devoted '90s fan could not have consumed every show the decade offered up. Let's face it, not everything on air in the '90s was ER levels of good, and some of the good stuff just got lost along the way. The 11 shows on this list have all but been lost in the annals of TV history, but '90s nostalgia knows no bounds, so it is time to remember why you forgot about the existence of the world's most overly complicated dating show.

A floppy-haired Chris Hardwick and Jenny McCarthy hosted this sublimely weird dating show where a picker (a single woman or man) would try to narrow down their dating pool of 50 eligible bachelors or bachelorettes via arbitrary questions and physical stunts. The whole show was loud and absurd, but it had its moment in the pop culture sun. Sabrina the Teenage Witch and Boy Meets World both featured episodes spoofing the show during their runs.

2. Caroline In The City, NBC

Once part of NBC's famed Must See TV Thursday night lineup, Caroline in the City was a sweet romantic comedy about a cartoonist who lived in Manhattan. The show's biggest attraction was the chemistry between Caroline and her grumpy illustrator Richard. If you watched the show then there is a 99.9 percent chance you shipped those crazy kids hard back in the day.

There was a time, kids, when Ryan Reynolds and Nathan Fillion were on the same TV show and it was a very good time. Unfortunately, Two Guys, a Girl, and a Pizza Place spent all of its four seasons on air having identity crises. Between cast changes, time slot changes, title changes, and a disappearing pizza place, it's easy to forget it was all one show and not four different ones with an eerily similar cast.

You know who used to be straight out of Compton? Uncle Phil from Fresh Prince of Bel-Air and Terrance Howard. The pair starred in the Compton set lawyer comedy for two seasons. While the show is more than a little dated, the novelty of seeing Uncle Phil as Lucious Lyons' dad makes Sparks worth revisiting.

Poor Step by Step, it always gets left out of the TGIF nostalgia. The blended family comedy lasted for seven seasons, but it never inspired the devotion the rest of the TGIF lineup did — in fact, it moved to CBS for its final season. Even if you don't remember the show, you probably remember the super crushworthy surfer dude Cody who lived in a van parked in the family's driveway.

I am fairly certain Nick Arcade was magic. It sent kids into video games, which blew my 5-year-old mind. Once there, they could collect coins, defeat the wizard, and win what is still one TV's most inventive game shows.

Since it was a parent approved series, Promised Land held little appeal to older '90s kids, but for those in the know it was a way to watch '90s heartthrob Austin O'Brien ( My Girl 2 ) and fantasize about being his girlfriend and traveling across America instead of going to school. (That wasn't just me, right?)

Sisters focused exclusively on the lives of women, making it a landmark series in its own right. So, why does a show with an all-star cast that included Swoosie Kurtz and Sela Ward rarely ever come up in conversation? Because it isn't available anywhere for younger viewers to watch.

This kid's show had a cool, but slightly too ambitious premise. The show focused on a kid, his robot, and the time machine in his basement. He encountered lots of historical figures, and there were cartoon interludes for some reason. It is entirely possible you thought this show was a fever dream, and really, who could blame you?

Imagine a version of Saved by the Bell that had a diverse cast and more realistic storylines — you have City Guys. In retrospect, this show should probably be the more iconic one.

Premiering at the tale end of the '90s, Get Real is a criminally underrated one season wonder. Anne Hathaway and Jesse Eisenberg starred as siblings and the family drama aspect of the series always rang true. Sadly, it was swiftly cancelled and forgotten before it even left the airwaves.

Remember, '90s TV was a vast landscape that stretched way beyond Family Matters and Friends. These shows may not be nostalgia-generating masterpieces, but once upon a time they were all someone's favorite show.