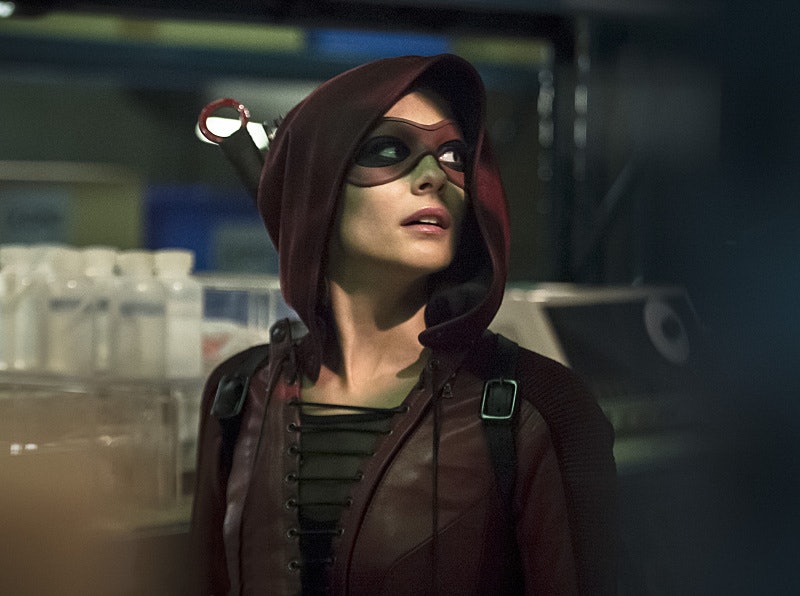 Who ever thought we'd actually be grateful for Thea's bloodlust on Arrow ? Not me! And yet that's exactly what happened during Wednesday night's episode "Brotherhood," after Damien Darhk attempted to kill Thea and failed. And considering that this particular Big Bad is used to getting his way, this is not an experience that he hopes to repeat anytime soon. But the more pressing question is why did it even happen to begin with? Everyone that we've seen Darhk use his powers on has not lived to tell the tale, so why would they fail on him now with Thea?

The obvious answer is, of course, that it's connected to the Lazarus Pit. Thea's resurrection and bloodlust must somehow be able to counteract whatever mystical powers Darhk has at his disposal. I don't know how. I don't know why. But so far that's the most logical explanation for all of this. But the intrigue doesn't just stop there. Not only was Thea immune to Darhk's powers, but their little interaction made her bloodlust go away, at least temporarily. So now she's determined to make her bloodlust disappear completely… and she plans on using Damien Darhk in order to do it.

Clearly, this is a very dangerous endeavor for her to take on, and judging by the look on Malcolm Merlyn's face when she shared her plan with him, he's less than thrilled with this idea. And honestly, who can blame him? We've seen firsthand just how badass Darhk can be. It's one thing to escape from him unharmed. It's quite another to purposefully seek him out. You're basically just asking to get yourself killed.

That looming grave from the Arrow flash forward still remains a mystery. Let's just hope that in trying to control her urge to kill, Thea doesn't end up getting herself killed in the process.