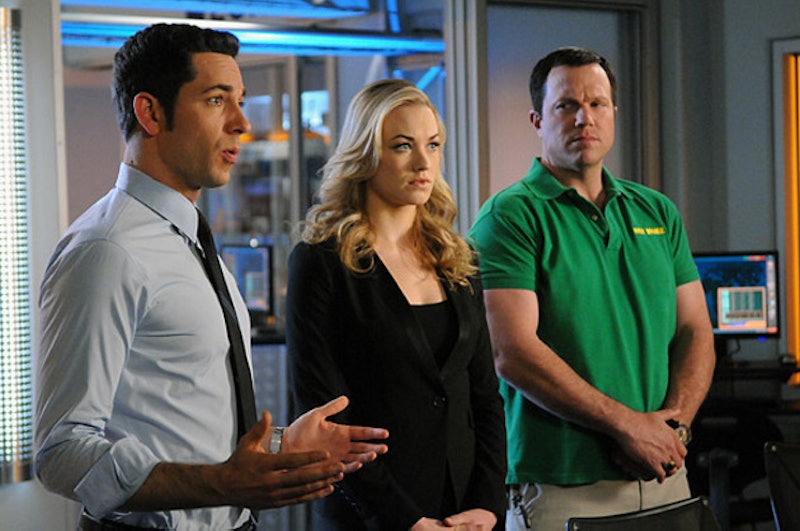 When I think about Chuck, the first thing that comes to my mind isn't the spy adventures or even the romance between Sarah and Chuck. It's the amazing found family Chuck and Ellie built. At its heart, Chuck was a show about family, and I'm not talking about family in the nuclear sense. Chuck and Ellie only had each other to lean on for a long time, and, for that reason, the siblings were passionate about never letting their friends feel alone. Chuck celebrated found families, blended families, work families — basically every kind of family you can imagine. The Bartowskis understood the importance of forming bonds that went beyond blood, and, as a result, Chuck became one of the most family-oriented shows on television.

There are so many moments throughout the show's five-season run that emphasize the importance of treasuring the important people in your life, whether they are your annoying, but well-meaning, co-workers or your sister who would do anything for you. Chuck and Ellie taught Sarah and Casey how to trust in other people, and they also learned how to open their hearts to their parents when they came back into their lives.

Chuck is full of beautiful moments that showcase all the varied, but equally important, types of families out there. These are just a few of my favorites.

1. When Chuck Tracked Down His Father So He Could Walk Ellie Down The Aisle

Stephen Bartowski was not a perfect father. Even when he was present in Chuck and Ellie's lives, he was emotionally absent more often than not. Still, the only dream Ellie had for her wedding was for her father to walk her down the aisle, and, even though he had not seen his children for years, Stephen stepped up thanks to Chuck. The moment illustrated what an amazing brother Chuck was and offered Stephen a way back into his children's lives.

2. When Ellie Welcomed Sarah Into The Family

Right from the start, Ellie was kind and welcoming to Sarah. Of course, for Sarah, accepting Ellie's kindness wasn't easy, because Sarah knew she was lying to Ellie about who she truly was. In the end, none of the secrets or lies changed the fact that Ellie loved Sarah, and she made sure Sarah knew it when she told her, "We're practically family, right? But more importantly, we're friends."

Morgan and Chuck were always family. Their friendship was one of the show's purest examples of love, so, when Morgan gives Sarah "permission" to marry Chuck, it's a big deal for both of them. It is a sign of acceptance on both sides, an acknowledgement of just how much both Sarah and Morgan mean to Chuck, and how much he means to them.

4. When Casey Finally Admitted How Much He Cared About The Team

Casey always put on a gruff front, but, in the final episode of the series, he finally accepted that there was one thing he cared about more than his career, and that was his team. The people Casey had begrudgingly agreed to work with were in fact his family, and they had been from the start.

5. When The Buy More Crew Got Personal

The Buy More crew was a family unto themselves. They were concerned with Chuck's love life, Big Mike was a father figure to Morgan, and Jeff and Lester understood each other on a level no one else possibly could. It's hard to point to just one moment, but I do love the scene where Big Mike and Lester get teary over Jeff's thoughtful analysis of Chuck and Sarah's love.

6. When Mary Chose Her Kids

Mary left her children when Chuck was just in the fifth grade. When she finally came back into their lives, her motives were unclear until she chose Chuck and Ellie over Volkoff. In that moment, Mary began to earn back the trust she lost when she left her children to go undercover.

7. When Devon Made It Clear That He & Chuck Were Brothers

Devon was the first member of Chuck's family to learn he was a spy, and he risked a lot by keeping Chuck's secret from Ellie. He did it, though, because he wasn't just Ellie's husband; he was Chuck's brother in every way that counted.

8. When Sarah Introduced Her Birth Family To Her Found Family

For a long time, the show didn't mention anything about Sarah's birth family, but, in Season 5, Sarah's mother and her adopted little sister Molly needed her help. This led to Sarah not only reconnecting with her mom, but, in a beautiful scene, sitting down to dinner with her entire family — from Chuck and Casey straight through to her mom and Molly.

9. When Ellie Promised To Look Out For Chuck

It all started with Stephen asking Ellie to always look out for Chuck. Ellie was just a kid herself, but she took on the role of mother and sister to her little brother. It was her love that helped make Chuck the amazing man he became. Without her guidance, Chuck may have never brought so many people into their lives to create such an expansive and supportive family unit.

Chuck understood the importance of found families in a way that always makes my heart feel very full. There was always room at the Bartowski table for one more.