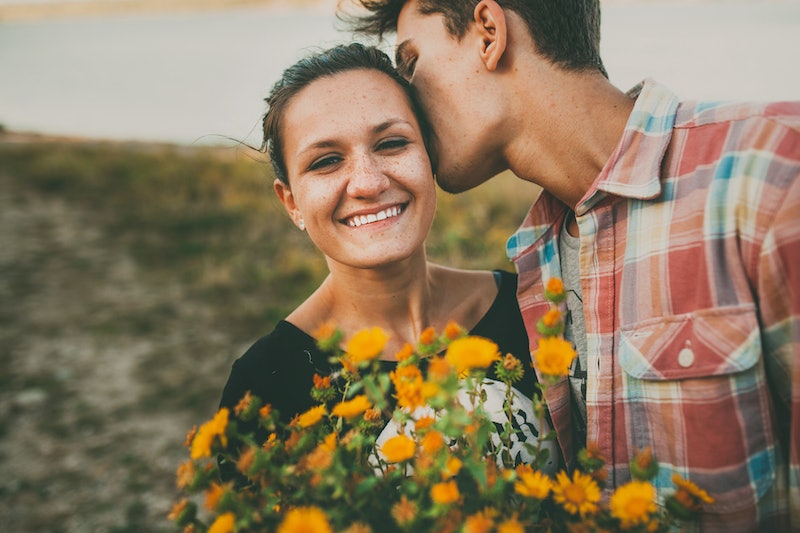 Your first anniversary as a couple is big milestone. Partially because it's an excuse for presents and going out to dinner. And because we're not talking marriage anniversaries, you don't have to get some horrible first-year paper anniversary gift. It can be the chocolate- and pizza- filled anniversary. A onesie and churros anniversary. It can be whatever you want it to be. Well, whatever food you want it to be, because I don't know anything more romantic than that.

It also means you've gotten through one of everything — the awkward holiday period, the frozen winter, the sweaty summer sex season, everything. Which means that you're right on track to be a long-term couple, if that's what you both are looking for. And coming up to the one-year mark, there are some things that you should try as a couple. Although generally I would say you should do everything at your own speed, as you start to get serious, there are a few things you probably want to have under your belt. It may be that you should just try something once and see if you like it, but other's a good indicator of things to come.

So here are seven things every couple should do before their first anniversary, because hangriness can seriously tear a couple apart and you're better than that:

1. Go On A Couple's Getaway

I've said it before and will say it again: you don't know someone until you've travelled with them. In my group of friends, we often refer to it as a make or break for a couple. If you're getting toward the anniversary mark and are looking at being together for the long haul, it's good to see how you do traveling. You don't need to go backpacking across the country or anything, but a weekend away together is usually a good test.

2. Put In Some Proper Face Time With Each Other's People

It's amazing how long some couples can stay in the honeymoon period. Although it's not unusual for someone to see less of their friends and disappear into their relationship for a couple of months, some people take it to the extreme. If you can see the one-year mark and you're still wrapped up with your significant other all the time, take a breath. Your relationship can't exist in a bubble, that's just not sustainable. Put in some time doing each other's real world things to make sure things will go as smoothly in the long run.

3. Decide On A Default Delivery Place/Restaurant

There's nothing worse than sitting their with your significant other, both of you completely indecisive on where to get food. You're both getting hungrier and more annoyed that the other one can't pick a place. I get it— I love all food so much that giving me options turns me into a daydreaming fool— but it's awful. Don't get hangry, have a backup place in mind that you both love and can default to when life is hard. There's no point in getting to the point where you want to murder each other every Friday night when you both agree the onion bhajis at your local Indian restaurant are a gift from god.

I'm a big advocate of having your own, separate hobbies, but finding a shared activity, too. You've always wanted to try rock climbing? See if your significant other is into it. Having something you can do together, rather than just being, together will be a good addition to a long-term relationship.

5. Try A Fun Sex Thing New To Both Of You

At some point the sex is going to need to be mixed up a bit. It's good to start including a bit of experimentation early, so it feels less like a "something's gone wrong and we need to fix it" stressful situation later on. It doesn't have to be anything major— maybe just a new sex position or adding in a fun, vibrating toy, but find something that you can both try for the first time together.

As much as it all shouldn't be couch-time and TV, everyone deserves a fun couple's staycation. Bring in some groceries (donuts and frozen pizza) or rely on delivery to get you through the day, and make your bed your home for the foreseeable future. Everyone deserves a break and we can't all afford to travel all the time.

7. Know When Your Anniversary Is

Fun fact: anniversaries aren't actually that straightforward. Some people celebrate them based on a first date time or when you first had sex or when you became monogamous, because they may be different things. If you know that you're getting up to the one year time frame, make sure you're both on the same page as to when (and what) you're actually celebrating.