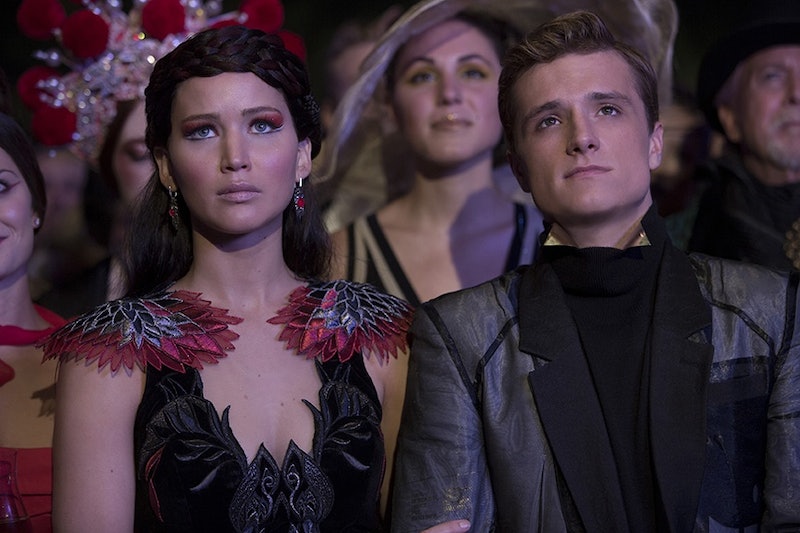 A lot of loose ends are tied up in the Mockingjay epilogue, namely the fate of Katniss, Peeta and Gale. Yes, by the end of the final Hunger Games book, Katniss has made her decision and chosen Peeta over Gale. In the epilogue, Katniss and Peeta are living together in District 12 and it is revealed that Gale is off working in the new Panem government in District 2. Another thing revealed in the epilogue: Katniss and Peeta are parents! That's right, Everlark fans, Katniss and Peeta, the original Victors of District 12, have two kids: one daughter and one son. Before you get too giddy with joy, know that author Suzanne Collins left out one, very important detail: the names of their children. So, what do Peeta and Katniss name their kids?

The monikers of the Everlark kids have been a great source of heated debate and discussion among Hunger Games fans. Would Katniss name her daughter after her sister, Prim? Would Peeta insist on naming their son Peeta Jr.? (OK, I admit, that one is unlikely.) One thing is for sure: the kids are adorable, as described in the Mockingjay epilogue: "The dancing girl with the dark hair and blue eyes. The boy with blond curls and gray eyes, struggling to keep up with her on his chubby toddler legs."

That brief description is all Collins was willing to give fans in the epilogue, but has she spoken out since, à la JK Rowling? Not so much. Some fans have claimed that Collins later revealed the names of the Everlark children to be Willow and Rye, but this seems doubtful. No official statement from Collins has confirmed the names, and a fan on a message board stated that Collins confirmed the names via Twitter, on which Collins does not have a profile.

That said, Willow and Rye are pretty cute names for Katniss and Peeta's kids, but they don't seem particularly meaningful. A lot of fans prefer the idea of Katniss and Peeta giving their children names of the dead who sacrificed themselves — like Prim and Finnick. Personally, I think Katniss and Peeta have enough trouble dealing with their traumatic pasts without naming their children after the dead that haunt them. That said, I did see one site suggesting the names Rose for Primrose and Finn for Finnick, which I think could be sweet. Of course, Katniss could also choose to name her daughter after Rue instead of Prim, which might be slightly less upsetting. (But only slightly.)

Katniss and Peeta could also simply give their children brand new names. As both Katniss and Peeta are from District 12, it seems likely that their kids would be named after something natural, like plants or weather. Perhaps their names are Rain and Oakley, or Violet and Sky, or Sarah and John. (Hey, someone in Panem has got to have a boring, regular person name.)

We may never know what Katniss and Peeta named their kids. And even if Collins did announce their official names, it would be impossible to satisfy every single Hunger Games fan out there. Maybe the names of the Everlark children are best left to the imagination.