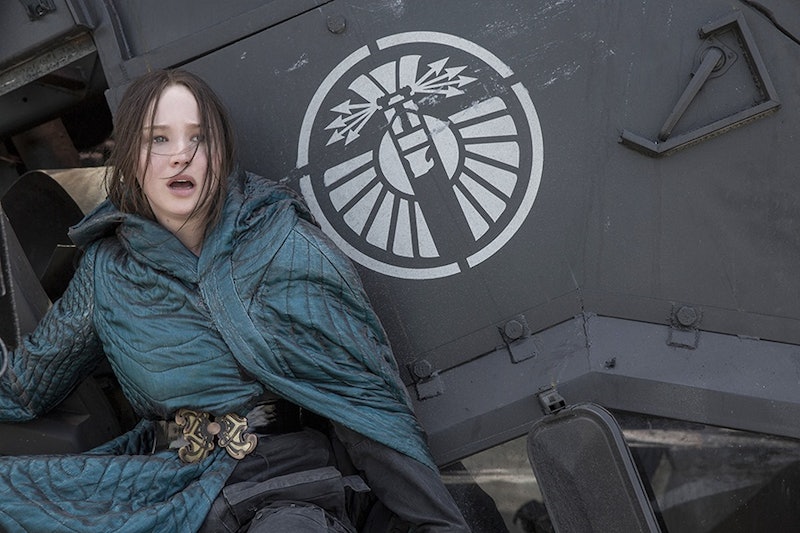 Audiences for The Hunger Games movies range from mega-fans who have memorized ever sentence of Suzanne Collins' trilogy to casual viewers just enjoying a trip to the movies with their friends. For those who lean more towards the latter, you're probably going to walk out of Mockingjay, Part 2 with one very specific question: what was that small, metal ball Katniss kept playing with? First things first: that's not a ball, it's a pearl, so the real question is, what does Katniss' pearl mean in Mockingjay, Part 2 ?

To answer that question, I have to take you back to the beginning. When Katniss and Peeta were first selected as tributes from District 12, Peeta and Haymitch decided on a strategy to endear sponsors: make Katniss and Peeta the perfect pair of star crossed lovers. Throughout the Games, Katniss slowly embraced the idea of putting on a show for the cameras by giving Peeta a kiss or a small touch she normally wouldn't do. Though she tells herself it's just for show, in Catching Fire, Katniss is forced to realize she has feelings for Peeta she might not be able to explain. The relationship between the two has always been made up of a series of moments — real and not real. Some were performed for the cameras in the Games, others were not, and it's hard for both Katniss and Peeta to tell the difference. But the pearl Peeta gives Katniss is symbolic of one of those rare genuine moments.

Peeta gives Katniss the pearl in Catching Fire when the two are in the Arena for the Quarter Quell. After making a tentative alliance with Finnick, Peeta and Katniss settle down on the beach to eat oysters. And, when Peeta finds a pearl hidden inside, he gives it to Katniss. It's a rare moment of peace and normalcy in the middle of the chaos of the Games. When Katniss takes the pearl in her hand, she also resolves not to let Peeta sacrifice his life for hers. It's sweet and tragic and totally heartbreaking.

In Mockingjay, when Katniss and Peeta are separated, Katniss uses the pearl as a source of comfort. When she wakes up from a nightmare, unable to crawl into bed with Peeta, she plays with the pearl instead. After Peeta returns, hijacked by the Capitol, Katniss guards the pearl with her life, keeping it close to her when Peeta can't be.

Fans have embraced the pearl as the symbol of Peeta's love for Katniss. In fact, the pearl has become so iconic among Everlark shippers, many have incorporated the pearl into fanart and Hunger Games -themed jewlery.

I think that whether you're Team Peeta or Team Gale, you can agree that Katniss' pearl and what it represents is pretty darn romantic.