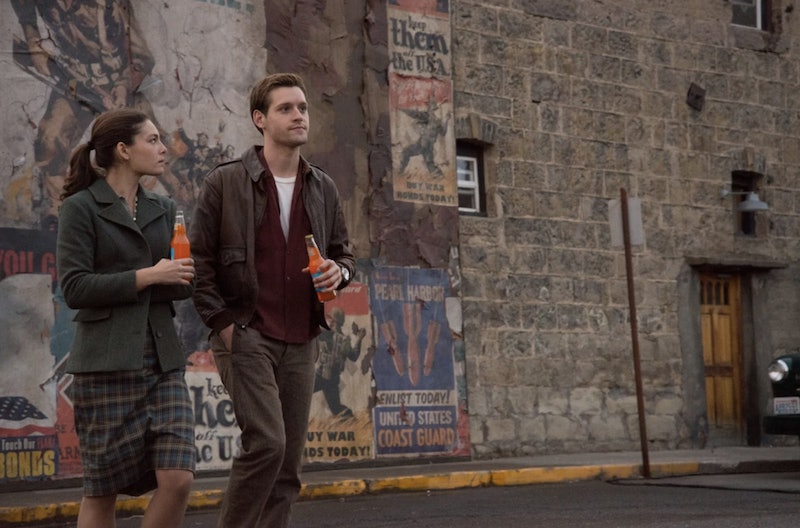 If you're just catching up with the new historical series on Amazon, The Man in the High Castle, you probably have some questions. The pilot introduces a lot of history and a lot of people. One character, Juliana, comes into contact with a film — from her sister Trudy — that shows a news reel of the United States winning World War II. On the film, it states The Grasshopper Lies Heavy, which makes an appearance on not only Juliana's film, but also sneaky Joe Blake's film, too. So, what does The Grasshopper Lies Heavy mean on The Man in the High Castle ? The phrase actually relates back to a novel in the book the show was inspired by.

Since the show takes place in a universe where the Axis powers won World War II, Juliana immediately wonders what her sister was involved in after receiving films that technically depict an unrealistic world. Frank, Juliana's partner, tells her that it couldn't be real, and the videos were made by an anti-fascist filmmaker, the Man in the High Castle. Despite Frank's pleas to take the film to the police, Juliana believes are real and vows to follow her sister's journey, which leads her to Colorado, a neutral state.

Many times, we see the handwritten-print on the film reels that read The Grasshopper Lies Heavy, which might mean nothing to those who haven't read the novel the show is based off of, but it actually means a lot.

The Grasshopper Lies Heavy In The Man In The High Castle

The Grasshopper Lies Heavy is a novel within a novel (The Man in the High Castle). It is written by author Hawthorne Abendsen, who is an author that writes about an alternate universe where the Axis powers won World War II. In The Man in the High Castle novel, the Germans have banned the book, which it is extremely popular in the Japanese Pacific states, and legal in the neutral states.

So, what is the novel within a novel actually about? The book details a world where the Axis powers are defeated in World War II, and those involved — Adolf Hitler, included — are tried for their crimes. The United States establishes itself a relationship with China in a way that leads to vanquishing Communist Mao Zedong, as well as outlawing racism within the states by the '50s. But, Britain doesn't do the same. Instead, it becomes racially-driven, which drives a wedge in between US and UK relationships, leading to a Cold War.

The end of the novel isn't explicitly completed in The Man in the High Castle, but there's a character claim that the British defeat the United States and become a superpower.

The grasshopper is an image related to a specific Bible verse, Ecclesiastes 12:5, in which it says, "Also when they shall be afraid of that which is high, and fears shall be in the way, and the almond tree shall flourish, and the grasshopper shall be a burden, and desire shall fail: because man goeth to his long home, and the mourners go about the streets." In alternate versions, it may read, "the grasshopper drags itself along," but both speak to the idea that man cannot bear the least burden.

It's Relation To The Man In The High Castle TV Show

It's very possible that the film in the show is a replacement for the novel in the novel. In terms of visually showing the contents of The Grasshopper Lies Heavy, it's a lot easier to show that via film than book pages. The idea that this book, The Grasshopper Lies Heavy, is depicting a world where even the U.S. fails as time progresses might speak to the hopefulness of Juliana now, but the eventual burden to come.

As the show continues, we'll probably learn more about the films and the meaning behind The Grasshopper Lies Heavy. At least let's hope so, because now I feel fully invested.