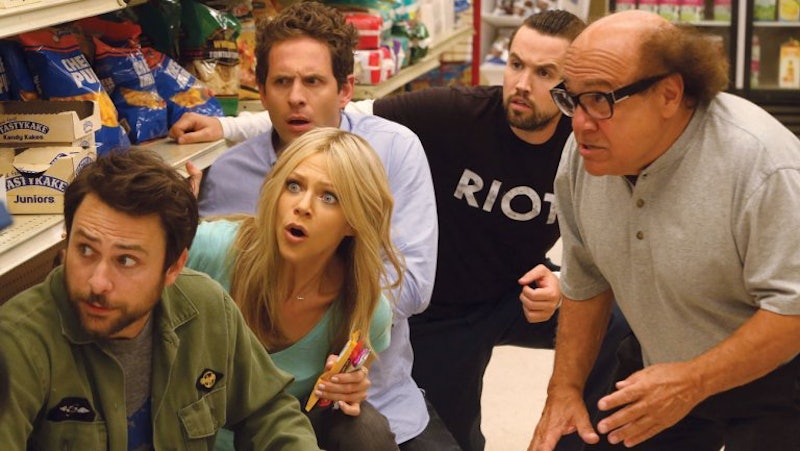 If you happened upon the show It's Always Sunny in Philadelphia back in 2005 — during its first season — and expected a next generation Friends or a comparable alternative to How I Met Your Mother, then you were probably pretty disappointed to learn that this was a show about five derelict sociopaths — a far cry from the caffeine addicted, good natured, warm hearted, earnestness of the typical "friend sitcom." Until you took a second glance and realized that those shows were often not as funny, daring, or smart as this. And, that's when you probably got hooked, because it takes giving It's Always Sunny in Philadelphia a second (sometimes third, fourth, and fifth) shot to really understand the kind of ambitious layers and mechanisms that make the TV show so painstakingly, so precisely different than everything else. But, if you started watching way back in 2005 you might have noticed something else: The It's Always Sunny in Philadelphia characters haven't changed over the course of the show, and that's a really good thing.

It's these characters — and their lack of self-awareness — as Charlie Day refers to in a recent interview with Vice, that make the show ageless. Day says, "We really strive to make sure the characters don't change very much. Sort of the heart of the show is their unflappable ignorance and lack of self-awareness that allows us to laugh at some of the despicable things they do." This irreverence — deeply imbued within the characters — is the main reason the show has continued to be funny and groundbreaking. It has a set of rules, and it sticks to them. One of those being the ways in which the main characters operate. So in honor of that — and the show's Season 11 premiere, coming in January — let's look at all the ways the gang hasn't changed since they arrived on our screens back in '05.

The series starts off with a bang, as the first episode was titled, "The Gang Gets Racist," wherein one of the lead characters, Mac, tries so hard to prove he's not racist, and ends up well, becoming the most racist of all. Throughout the series, Always Sunny has hit on a variety of un-PC topics, but it's always broached them from the most ridiculous standpoint possible — this is after all, next level, absurdist satire. Midway through last season, "The Gang Spies Like U.S." discussed asian stereotypes and was laden with such xenophobia that you'd almost forget any time has passed at all.

In "Charlie Got Molested" during Season 1, when news breaks that Charlie's old gym teacher has been arrested for molesting his students, Mac becomes jealous that he was never molested, wondering if its because he wasn't "good enough." For Dee, this narcissism was made especially evident in Season 5's “The Gang Wrestles For The Troops,” when she starts a relationship with a soldier online, but then finds out that he's in a wheelchair and leaves him. After it turns out that he can walk just fine, she tries to win him back.

In the episode "Charlie Wants An Abortion," Charlie's ex comes back into his life and tells him that they have a son together. After Charlie realizes that he's not actually the boy's father, he insists they spend time together anyway, in an effort to attract his long standing crush, "The Waitress." In the Season 8 episode "The Gang Gets Analyzed" all five characters invade Dee's therapy session so they can find out whose turn it is to wash the dishes, all motivated by of course, their own selfishness to not contribute.

After Charlie announces that he has cancer in Season 1, Dennis and Mac try to find someone to sleep with him, and use the diagnosis to their advantage as well. In season 9, "Mac and Dennis Buy a Timeshare," Dee and Charlie try to get out of a pyramid scheme by scamming others. All this manipulation comes to a head in "The Gang Broke Dee" of Season 9 as well, when Dee decides to finally believe all the things the guys have said about her, and ends up becoming a massively successful standup comic. That is until we realize the success — spoiler alert! — was all a setup. An elaborate plan to get Dee out of her funk, not because the gang was actually worried about her, but because she was "being all mopey and annoying and stuff."

In Season 2, "The Gang Exploits a Miracle," the character, Dennis, stops eating because he sees himself on TV, and thinks he looks fat. The show's long running play with insecurity and how that fuels the lives and choices of all these characters can still be found in later episodes, like Season 9's "The Gang Group Dates," where Dennis becomes obsessed with a website that allows women to rate their dates, and Mac and Charlie try to be hide their own anti-semitism so they can become respectable date options.

6. The Gang Still Has an Alcohol Problem

I mean, this really speak for itself. They do work at a bar after all.

7. The Gang's Still The Worst (But Best)

Why this group of ignorant, narcissistic, selfish, manipulative, insecure, alcoholics has managed to stay on air for so long isn't due to how compelling it is to watch terrible people do terrible things to each other (though, that might be part of it). Its because of the show's — and the character's — own commitment to that terribleness.

And for that, I applaud it.