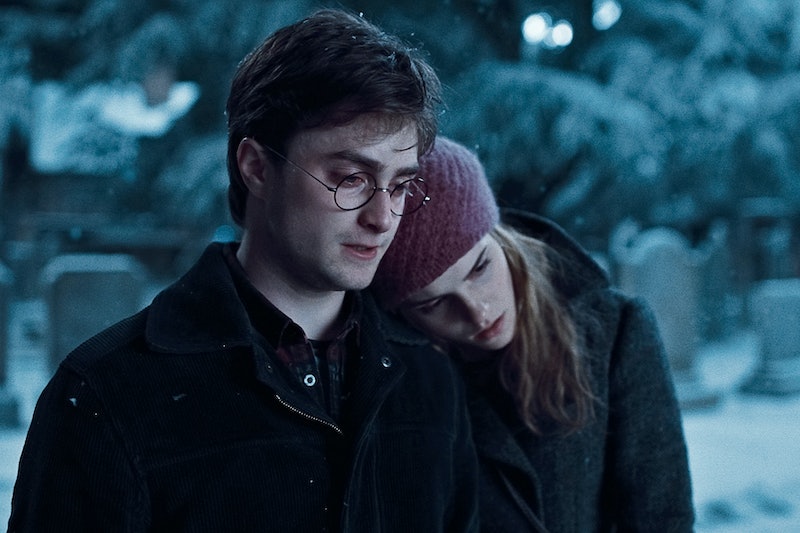 As I've grown, my time with Harry Potter has taken on a new character; moments I've treasured have worn thin as new passages have become pregnant with meaning. When you read Harry Potter as an adult, the tales shape and morph as you've had new experiences along your advancing years.

The very first page of my copy of Harry Potter and the Sorcerer's Stone is marred by a coffee stain that somehow manages to leave a mark throughout the entire chapter; various flecks of food stuffs have embedded themselves throughout the pages of Harry Potter and the Chamber of Secrets as well as Prisoner of Azkaban — a testament to teenage mornings spent at the breakfast table with a book propped in front of my cereal bowl. I'm not entirely sure what happened to Goblet of Fire , but it appears to have been through a rain storm of sorts (although it's far more likely that at some point I dropped it in the bath). Harry Potter and the Order of the Phoenix made it through an actual hurricane; tear stains have blurred the text on the final chapters of Half-Blood Prince, and I've read Deathly Hallows so many times that I have actually worn through the corners of the pages in some chapters.

Perhaps you can tell — my copies of Harry Potter have been with me longer than all of my furniture and many of my friends. Over the years, things have changed — and I'm not just talking about the accumulation of stains. Whether you're a dyed-in-the-wool Potter lover or just a casual reader, there are some things you only notice when you re-read Harry Potter as an adult.

I was a lucky child. I was loved (but not cloyingly), cherished, supported, and encouraged unconditionally — albeit occasionally with poorly-concealed concern. Within the sheltered bubble of my childhood, the sheer scope of the tragedy at the beating heart of the Harry Potter series never quite hit home. Of course, all bubbles burst eventually, and once you've experienced tragedy in your own life, the sudden death, vicious torture, and untimely abandonment that transform the Potterverse take on all new meaning.

2. Friends Come in All Shapes and Sizes

As you make your way through the cliques that run rampant in high school and struggle to integrate your "work friends" with your "friend friends" in your post-collegiate years, it can be hard to branch out, socially speaking. But, as you get older you take up the oboe on a dare or try your hand at rock climbing — and all of a sudden you're sharing milkshakes with your 80-year-old neighbor or braiding a dog's tail with your goddaughter. Once your circle of friends has expanded to include virtually anyone, Harry's unconditional love for Hagrid, Dobby, and Buckbeak hits much closer to home.

3. Adventure Is All Too Rare in This World

I have scaled mountains on horseback, frolicked with dolphins in the wild, and survived a prolonged rescue by Mexican special forces, but I cannot honestly say I've been on a proper adventure. As childhood dreams morph into adolescent ambition and then slowly fade into the daily dullness of young adult life, Harry's capacity for embracing adventure strikes a whole new chord.

Having planned my own wedding not long ago, I can tell you that the idea of a magical tent simply transforming into a dance floor is utterly intoxicating. Frankly, I can't understand why Molly Weasley was making such a fuss — at least she wasn't hand-folding napkins or lugging firewood from one end of the property to another.

5. It Helps to Have a Vault Full of Galleons

Although the phrase "check your privilege" feels woefully inappropriate to a conversation about the Chosen One, I will say that setting off to battle evil (or just making it through six years at boarding school) is a whole lot easier if you've got a vault full of gold at your disposal. And frankly, the question of funding feels different once you've moved out of the family home and started paying your own way.

If the last few years of American politics have taught us anything, surely they have taught us that institutionalized disenfranchisement is just as deadly and insidious as more blatant forms of bigotry, so I have to ask: How is it possible that the absolute enslavement of an entire race has gone unrecognized in the wizarding world for centuries? The older I get, the harder it is to stomach the notion of house elves working at Hogwarts.

7. Fred and George Weasley Could Teach a Master-Class in Entrepreneurship

Starting your own business is one heck of a wild ride. Weasleys' Wizard Wheezes is a testament not only to Fred and George's creative genius, but also to their business savvy. The older I get, the wiser the Weasley twins seem — and sometimes that scares me.

8. Sorting Students at Such a Young Age Seems Unfair

When I think back on my high school years, I barely recognize myself. I don't think I'm exaggerating when I say that there is a very real possibility I would have ended up a Slytherin house as a tribute to my sheer selfishness, if nothing else. With age comes a powerful awareness of the transformative nature of experience, so why sort so early?

9. They Should Teach Defense Against the Dark Arts in Every School

Not counting kindergarten (where I learned some very real lessons about sharing), after 18 years in school I have amassed four degrees, an absolute phobia of cafeterias, and almost no practicable skills. The closer I look at Harry's class schedule, the more disappointed I feel in muggle curriculum — given the state of the world we live in, what could be more relevant than Defense Against the Dark Arts?

10. Wizarding Robes Might Just Be the Ultimate School Uniform

Let's be honest: a kilt and a collared shirt are by no means flattering to every shape and size — wizarding robes, on the other hand, might just be the ultimate equalizer.

When I was 8 years old I fell down a flight of stairs and broke my nose, but for more than 24 hours I insisted that I was completely fine. I'm not great at admitting that I need help. At Hogwarts, however, help is always available to those who ask for it, and the older I get the more I appreciate that particular sort of security.