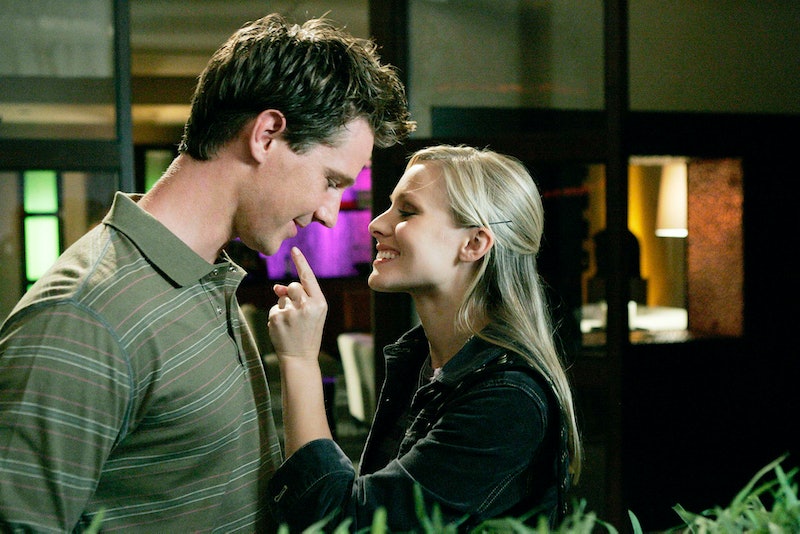 Ugh, it’s that time of the year again. Thanksgiving weekend is dawning upon us, which means another day chatting with your boring cousins who work “in finance,” when you’d rather stay home and marathon watch Veronica Mars . With all the absolutely bonkers family situations in Veronica Mars, you might as well be thankful that your not one of the Kanes.... or the Casablancas... or whatever family Gina belonged to. Failing that, though, you could always give thanks for the one shining beacon in the show: Logan Echolls.

OK, I spoke too soon, there are several shining beacons in that show. It’s a masterwork, and it’s my bad for undermining it. That all aside, Logan is particularly amazing (and more than a little bit swoon-worthy). If you don’t spend hours on the internet gushing over his relationship with Veronica, it’s only because you’ve spent many hours wishing you could take her place. Even when he was behaving at his worst, Logan was still the best in our eyes, and that hasn't changed.

So, during this time of giving thanks, lets focus on your fictional Veronica Mars boyfriend (which, hey, you could just tell Gram-Gram is real, it’s not like she’s going to Facebook him). Consider all of the following reasons to be thankful for Logan this Thanksgiving.

Logan is, without question, the only other person who comes to Veronica's battle of wits with a bazooka of one-liners. Banter is such fantastic foreplay, don't you think?

It's more of a grin here, but the point is you got to love that Logan Echolls smile. It just screams "trouble-maker."

3. He Seems, At The Very Least, Moderately Talented At Making Out

You don't hit up a bathroom with your sworn enemy unless they know how to kiss. And always with the spinning! So dramatic, so passionate.

4. He Knows How To Throw A Punch

If he's not kissing, he's violently giving a beat down for the sake of a loved one. Or for fun. Both.

5. He Is Delightfully Protective

Not just because he really, really enjoys punching people. When Veronica finds out he provided the GHB that got her drugged at Shelly Pomroy's house, he's filled with remorse. "I'm the one who's responsible for what happened to you," he says. "And I can't take that I hurt you like that. I can't take that I hurt you when all I wanna do is protect you." Luckily, Logan works to make it up time and time again, whether he's defending her honor or saving her life. It's clear up until the final episode that he doesn't take what he did lightly.

6. He Understands Familial Demons, To Say The Least

Granted, it's a fight that has left him permanently damaged. Nonetheless, you'd be a little messed up too if your mother committed suicide and your abusive father slept with and killed your ex-girlfriend.

Hellooooooo, sailor. You clean up well.

8. He's One Half Of The Most Epic Couples On Television

Lives ruined! Blood shed! You all know the rest. The point is that there's a reason that Logan and Veronica's ship name is LoVe, and it's because of their high drama dynamic.

9. You've Literally Churned Out Some Of Your Best Works Of Fanfiction Because He Exists

10. Also Bonus Points Because There Was Never A Moment We Had To Worry About Him Being Veronica's Brother

I really can't stress this enough. It's unimaginable that there was even a competition between him and Duncan in the beginning. Logan was the clear winner there, even without the possible-brother thing!

11. And Seriously, How Many Other Psychotic Jackasses Can You Really Root For?

When we first meet Logan, he's basically a monster and Veronica's number one antagonist (which is impressive, since Neptune High is full of 'em). Yet, over the course of the series, Logan charms us, showing he can be a nuanced, even tortured character with a razor sharp tongue and a strong romantic streak.

So make sure that, this holiday, you give him a shout out during grace, because we've been all the more #blessed since he entered TV history.

More like this
Gabby & Rachel Reveal How That 'Bachelorette' Rose Ceremony Twist Happened
By Grace Wehniainen
Memes & Tweets About Logan Switching From Rachel To Gabby On 'The Bachelorette'
By Grace Wehniainen
Everything To Know About 'Evil' Season 4
By Meguire Hennes
Does 'Locke & Key’s Ending Mean There Could Be A Season 4?
By Sophia Moore
Get Even More From Bustle — Sign Up For The Newsletter