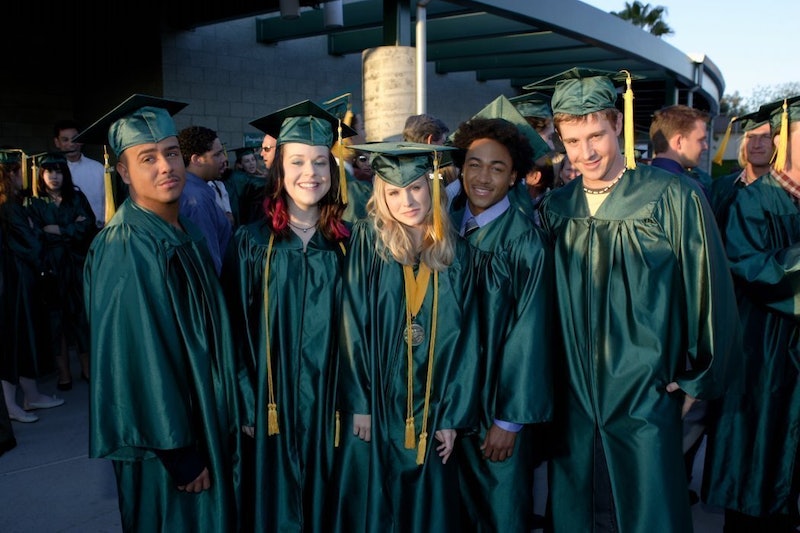 I didn't watch a lot of TV growing up, so I missed the boat on Veronica Mars when it first premiered — I actually didn't end up getting into it until college. The year was 2013, and Veronica Mars had just blown up the Internet in a major way, with its record-breaking Kickstarter campaign. It raised over $2 million in 10 hours, and suffice it to say, it was everywhere. My Facebook wall was all aflutter, and it was all my friends (who spent their middle school/high school years as acolytes of the cult show) could talk about. That's right, I watched Veronica Mars for the first time when I was an adult.

I was hesitant at first — even as a staunch Buffy fan, the whole pretty blonde it-girl-turned-crimefighter thing seemed potentially hokey, and I felt sure I was too old to watch and enjoy a teen drama from almost a decade ago. I was so wrong. Curiosity eventually got the better of me and I figured I'd at least give the first episode a watch — and the second I sat down to watch, I was hooked.

Now I look back on my reluctance to watch one of the best detective shows on TV, and laugh at my snobbiness. So, fellow adults who have a Veronica Mars-shaped gap in their lives? It's not too late — and if you're in any way on the fence, here are a few reasons why you should really give it a watch.

It Was Part Of The TV Renaissance

You know how they're always saying that it's the Golden Age of TV? Well, Veronica Mars is part of that in a major way. It played a sizable role in the lady-power uprising of its time (think Buffy and Alias), and it also joins the ranks of great TV mysteries (think Twin Peaks and Lost). Plus, the innovative "teen noir" spin on the show made it something of a groundbreaker — it's a handy torch that the equally game-changing Pretty Little Liars has taken on nicely (especially with "Shadow Play," their gloriously well-dressed homage to noir).

First and foremost, Veronica is fascinating (Kristen Bell is just as perfect in the role as you'd expect) — and the various relationships built and broken throughout the three seasons are basically gold. I mean, she's got the best dad ever, the best best friend ever (not to mention the best dead best friend ever), and the best boyfriend(s) ever — but, you know, in an interesting way, not a Stepford-y cookie cutter way.

It's One Of The Best Things A TV Fan Can Marathon

I found myself tearing through full seasons at a time, even though I wasn't really in a point in my life where I had the flexible schedule to do so (it was senior year of college, and I was taking an almost-doubled course load to graduate on time, I was working two part-time jobs, and I was playing in the school orchestra. Yeah, I was one of those). Anyway, what I was trying to convey with that extended humble-brag is that Veronica Mars is addictive. You hit play on that pilot episode, and I swear, you'll be hard pressed to stop watching until you find out which sketchy Neptunian murdered Lily Kane.

Of course, the addictiveness is in part due to the fact that...

... Its Mysteries Are ON POINT

I wouldn't hesitate to name VM as one of TV's best-executed mysteries: Both the investigations and the eventual solutions were simultaneously logical and satisfying (with just enough red herrings thrown in to drive us delightfully insane). Too often do TV mysteries get bogged down in their own twists and turns, only to end up drowned by their own mythology — teasing us for years on end before eventually coming to a disappointing conclusion (ahem, Lost ). Really, when you think about it, Rob Thomas and Co. pulled off the near-impossible with Veronica Mars.

It Hits The Sweet Spot Between Procedural & Serialized Drama

You know where part of that success came from? The show always managed to balance on the knife's edge between the procedural and serialized aspects that characterize the genre. It kept perfect pace for its network TV-length seasons by combining the perfect amount of satisfying mysteries-of-the-week with tantalizingly impossible-to-solve season-long (and multiple season-long) whodunnits.

TL;DR? Just watch it, it's a classic.