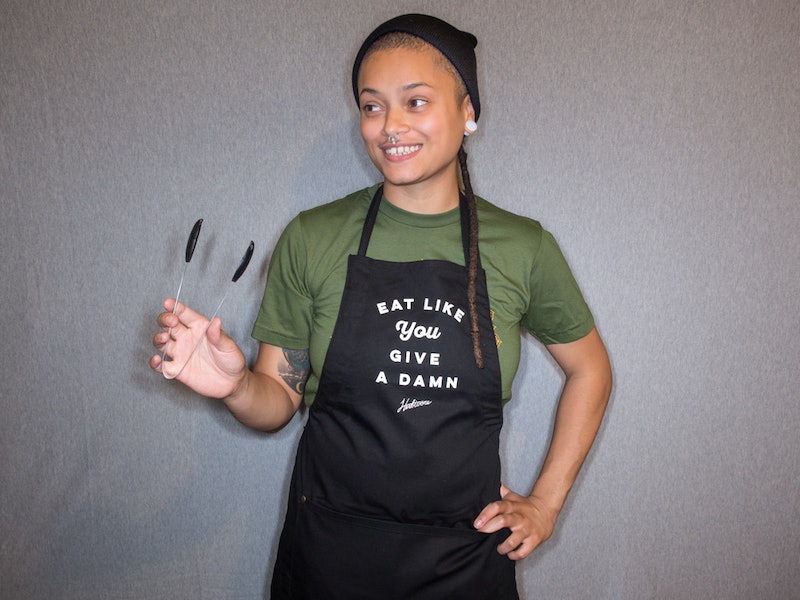 This is my first Thanksgiving as a vegan or a vegetarian. All the other years of my life, I chowed down on turkey, which I actually liked dry, so that it felt less like I was eating flesh.

In the last year, I've finally made the long-time-coming leap to becoming an official vegetarian, and in the last few months, to becoming a vegan. Since I'm hosting my first ever vegan thanksgiving dinner with my partner this week, I'm rapidly becoming acquainted with the questions people ask vegans and vegetarians on the holiday. "But what will we eat? Wait, does vegan mean no eggs or milk too?"

When I received these questions, I initially felt guilty imposing my beliefs on my friends, and so I made our potluck invite a vegan/vegetarian dinner as a compromise, even though I won't be able to eat the dishes with dairy, and frankly don't feel great about celebrating them, considering what I know now about the suffering that goes into making cheese, milk, and eggs.

But this is a work in progress, and that includes figuring out how I want to respond to some of the most common questions and comments I've been getting about being a vegan on Thanksgiving. Because when people are asking questions, even if they are sometimes judgmental or ignorant, that's a good thing. I actually can't think of a better holiday for opening up a dialogue about eating animals.

You may get this one if you're the guest of a non-vegan or veggie host — hopefully in advance of the meal planning, but possibly after you've already sat down and they realized they failed to note that being vegan meant no milk or cream. (This happens a surprising amount. I've had waiters at trendy restaurants in New York City suggest cheese and fish dishes as vegan, so it's not surprising Aunt Selma might not get it.) It's more effective in the long run to respond with kindness here.

How To Respond: "Actually, there are a ton of delicious things I can eat that everyone will like. Let me send you some recipe and food blog ideas, or even a few specific recipes."

If you host a vegan Thanksgiving, you will get some variation of this question if you ask people to bring vegan food. People are relatively accepting of vegetarians, but as a vegan I've noticed people start getting annoyed. I get it. I had all kinds of snobby ideas about how snobby vegans were before I became one. Yes, it takes slightly more foresight to cook a vegan Thanksgiving meal, perhaps. But in an age of Pintrest, Google, and gourmet vegan cuisine, it's hardly difficult.

How To Respond: "There are a ton of things we can eat. Don't worry, it'll taste good — plus, you're probably going to feel better after my meal, even if you eat just as much. If you feel like bringing something, I could even pick a recipe and send it to you. Maybe you can think of it as a fun cooking challenge. If not, wine's cool."

3. "It's Just Not Thanksgiving Without A Turkey"

No one has said this (to our face, anyway), but I know that my partner's vegetarian parents, who are hosting a vegetarian Thanksgiving this year, got this question.

3. "Don't You Miss All The Normal Thanksgiving Foods?"

How To Respond: "All the traditional dishes (besides turkey) have really similar vegan versions that taste really good. And now that I've made the connection that the turkey is actually an animal and not just a food, it isn't appetizing to me anymore."

It's this, or some variation on a Tofurky joke, usually said really snidely. Personally, I have no desire to eat it myself, but if you like it, more power to you.

If this is said in a condescending way, at first I want to say, "Yes, it's really hard to eat all this delicious food in excess without the guilt of knowing it was produced by animal suffering. It's also really hard that even though I'm also stuffed, I probably feel less sick than you right now because vegan food is so much easier to digest." But rhetorically, that's not the best way to get to people — or have compassion — which is what this is all about.

How To Respond: "The only thing that's hard is if the people I'm having dinner with aren't willing to cook or bring dishes I can eat. Otherwise, it's just delicious, and I feel less sick after dinner, even if I eat as much."

6. "You Must Think I'm A Terrible Person For Eating This"

People might also say, "I bet you think you're better than me," or, "You're a better person than me." Either way, it's important to be take a cue from the Buddha in these moments and not take the bait. Maybe even let the comment hang awkwardly in the air for a second before you respond with kindness.

As theorist Carol J. Adams writes in Living Among Meat Eaters, it's useful to "recognize meat eaters as blocked vegetarians, but relate to them as potential vegetarians. As a result we reorient our own goals in any interaction: it is not to defend our diet but to help them remove the defensiveness encircling theirs." In other words, don't be an exclusive asshole about it or simply write off this comment by minimizing or apologizing for your ethics; instead, engage them in a dialogue by being open about your beliefs in a non-judgmental way, and asking plenty of questions.

What You Should Say: "Why would I think that?"

You can have a conversation from there, but be sure to listen more than you speak — you can offer to send them some articles if they're interested at the end.

7. "I Know You Don't Eat Meat, But What About Chicken Or Turkey?"

It's best just to explain this without too much attitude if you can, since the person asking this one is probably either older or from a culture where the ideas of vegetarianism and veganism aren't as widespread. Same thing with people thinking vegan means you can eat milk or eggs — it's best just to educate rather than alienate here, since they asked the question.

How To Respond: "No, not eating meat means I don't eat any animals."

Progressive people are into sharing memes lately about how messed up it is that we spend a day celebrating a relationship that would result in Native American's mass genocide. I agree, and though I do celebrate Thanksgiving, I certainly recognize how only saying, "But I celebrate it as a fall harvest, not an American thing," is inherently a flawed argument.

That said, I am trying to take the holiday and make it into an opportunity to talk about injustice in the world, recognize my immense privilege, and create a new tradition where I can feel grateful for the fact that I can reduce the suffering of others, at least when it comes to what I eat.

If you consider yourself progressive and have shared a meme like the one above (I know I did as a meat-eater) then you might want to also consider what you put on your plate. If you feel guilty about our country's history of mass murder and enslavement, then why is it necessary to celebrate Thanksgiving and your family by putting a corpse on the middle of the table, or by cooking with milk and cheese that's the result of a baby cow being torn from its mother?

You might feel that animal suffering is unfortunate, but that it's "different" than our suffering as humans. Specieism, sexism, and racism are all predicated on the same logic: that for "them," it's just different. That's just the way things are. But it doesn't have to be the way things are, especially in this case, where the solution is so simple. If we all just opted out, simply didn't eat the result of animal suffering for our own pleasure when we have no nutritional need to, well, that would really be something to celebrate. What's more abundant than realizing how many other options you have?

How To Respond: "Thanksgiving is about feeling grateful and abundant, and appreciative of my life and the lives of others. For me, there's no better way to do that than to remind myself that I'm so privileged I don't even need to eat animal products to have a delicious, filling meal. I feel thankful every time I think about it."

More like this
I Tried The $20 TikTok Viral Oishii Strawberries — Here's What I Thought
By Sophie Hanson
Trust Me, Pickle Martinis Are The New It Drink Of The Season
By Emma Carey
The 8 Best Chew Bones For Puppies, According To A Vet
By Andrea Hannah
Tacos Are Chef Kay Kay’s True Love Language
By Maxine Harrison
Get Even More From Bustle — Sign Up For The Newsletter