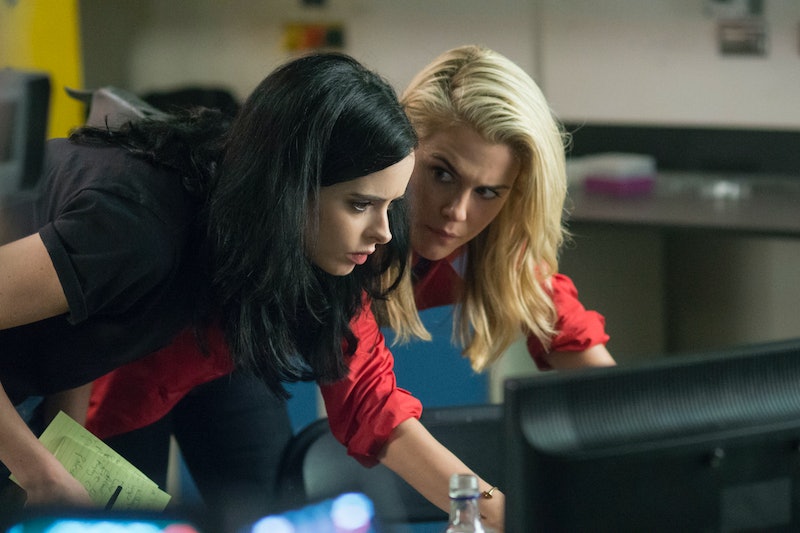 Jessica Jones doesn't have a lot of good things going on in her life, and is severely suffering from PTSD after being mind controlled by Kilgrave. But one great thing she has going for her is her relationship with her best friend, Trish Walker on Netflix's newest Marvel series. While everyone else on Jessica Jones may want to be best friends with Trish "Patsy" Walker after her hugely successful childhood TV show where she sang "I wanna be your friend!," only one person is lucky enough to claim the title of Patsy's BFF — and that's Jessica herself.

Although it's easy to think that Trish has lead a charmed life since she's an intelligent, beautiful, and wealthy radio show host, Jessica knows better. Trish was raised by her controlling, abusive mother Dorothy, who didn't want anything to compromise her daughter's fame. One of the reasons Trish is such a devoted friend to Jessica is because Jessica helped her escape from her mother and get through her drug problem, after Dorothy adopted an orphaned Jessica as a publicity stunt. With Jessica's help, Trish was able to come out on the other side of "Patsy," with her natural blonde hair and her preferred name. Now that Trish has her life together, it's time to help Jessica, who has been in trouble ever since Kilgrave entered her life. Trish is not willing to abandon her best friend in her time of need — no matter how dangerous it is and no matter how hard Jessica makes it to be helped.

The lives of Jessica and Trish aren't relatable to humans living in the non-superhero world when they are busy fighting the superhuman mind-controller Kilgrave, but their backstories and devoted friendship are things anyone with a good BFF can understand. So even though you probably don't have as much drama going down in your life as Jessica Jones, here are seven reasons why you need Trish as your best friend — beyond the fact that she's good at distracting the guy who works at the morgue.

1. She Has Good Taste

Even Trish's estranged mom had to admit that Trish has good — yet expensive — taste. When your apartment is in complete disarray like Jessica's, it's nice to have a friend whose home is welcoming, clean, and swanky. Plus, Trish is always willing to replace your busted door.

2. She'll Give It To You Straight

Jessica is not one to mince words and while Trish is much more positive than her sarcastic friend, she's not going to beat around the bush either. She calls Jessica out, especially when Jessica needs it most. Plus, she's pretty damn funny when she wants to be, which is essential when life for Jessica Jones is so dark.

3. She's A Badass In Her Own Right

With a best friend like Jessica, it would be easy to let her do all your dirty work, but instead Trish decided she needed to defend herself and learned Krav Maga. Her skills hint at the fact that she's got her own superpowers in the Marvel comics — as the superhero Hellcat — but they also came in quite handy later in Season 1 of Jessica Jones.

4. And Believes In A Noble Cause

Even though she was the highest paid child actor ever and has the most successful talk show in New York City, Trish Walker — with no actual superhero powers (for now) — desires to save the world. She's the kind of best friend whose own righteous aspirations want to make you be a better person, which is exactly the type of positive influence Jessica needs in her life.

5. She Encourages Your Success

While Jessica may not have been really into Trish's idea for her superhero look and name (the Jessica I know would rather wear a hoagie to fight crime in than the Jewel outfit), Trish's heart was in the right place. Trish has found her own success in life post-child stardom and she just wants to see her best friend make the most out of her abilities too.

Even with a new man in her life — the troubling police officer Will Simpson — Trish knows where her loyalties lie. Like when Simpson tried to push Trish to tell him about Jessica's abilities, Trish would have none of it. That's the type of best friend every girl needs in her life. Sisters before misters, my friends — especially in Jessica and Trish's case.

7. She'll Stay By Your Side Through Thick & Thin

Jessica and Trish are two very different people and though Jessica might not follow the "What would Trish do?" code, that doesn't mean Trish still doesn't support her decision. Whether Trish is there just to help Jessica talk through a problem or actually facing Kilgrave head-on with her, the kind of friendship that Trish provides allows the emotionally-hardened Jessica to open up. And while Jessica is busy feeling guilty for the terrible things that Kilgrave made her do, Trish is there to remind her that she's being the best damn hero she can possibly be — making Trish the ultimate BFF.

Jessica Jones has provided one of the most devoted female friendships to ever come to TV thanks to Trish Walker, which is something that even Jessica would have to admit is rare, special, and should never be taken for granted.