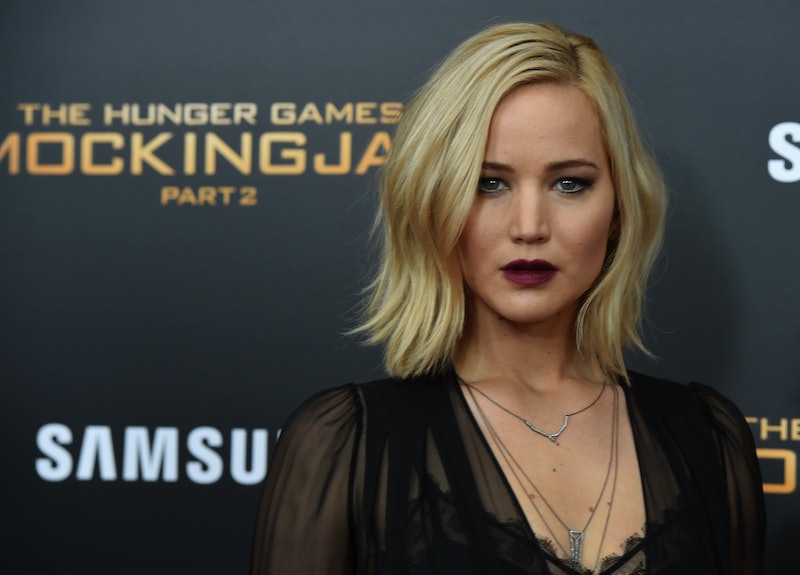 Jennifer Lawrence sat down with The Hollywood Reporter as part of the magazine's annual roundtable of actresses in contention for the Academy Award and, as we've come to expect from Jennifer Lawrence, she had a lot to say. The actress will undoubtedly be all over the red carpet this season for her work in Joy, so we've got months of more interviews ahead of us. This interview was a little different, however, as she was surrounded by her peers, seven other actresses, (including Cate Blanchett, Helen Mirren, Brie Larson, Carey Mulligan, Kate Winslet, Jane Fonda and Charlotte Rampling) who gave riveting performances this year. As you could imagine with such an impressive group of dramatic actresses, the subject matter of the roundtable was more on the serious side. They tackled issues like sexism in the movie industry, maternity leave and why they felt the call to act. It's heavier stuff than Lawrence usually talks about in interviews, which was what makes it so great.

She brings up a lot of good points during the roundtable, which will air in full in January on the Sundance channel. It's wonderful to see that an artist that is so beloved for being relatable and, sure, a bit goofy at times, can also be so poignant and serious. It would be easy to discount Lawrence as "the cool girl," but she's got so much more going on than that.

Here are JLaw's best moments from the THR roundtable.

1. When she talked about her relationship with director, David O. Russell

The pair have collaborated on three films now, including Silver Linings Playbook, which snagged Lawrence an Oscar. She talks about how the two have developed a special relationship after working together so many times. "We have such a shorthand, and it's honest, because we don't have to go through the 'getting-to-know-each-other' period, or being polite to each other. It's just real and immediate...It's incredible. I want to work with him until one of us dies."

2. When she said women can also be sexist

The conversation turned to the lack of female movie studio heads and Lawrence expressed that women in power might not help solve the problem. "Women can be misogynistic too. More so. They have more freedom to do it."

3. When she said she had a back up career in mind

It might seem crazy that someone who won an Academy Award at 22 might've given up on acting. Apparently, JLaw had an alternate plan ready, just in case things didn't work out. "I had a five-year-plan. I was going to give it five years and if that didn't work out I was going to go back to Kentucky and become a nurse."

4. When she talked about the awkwardness of filming a sex scene

Lawrence admitted to just recently filming her first major sex scene for an upcoming film with Chris Pratt. "It was really weird. Everything was done right, it wasn't anybody's fault, nobody did anything wrong, it's just a bizarre experience. I got really, really drunk, but then that led to more anxiety. When I got home I was like, 'what have I done?' My co-star is married. It was going to be my first time even kissing a married man, and guilt is like the worst feeling in your stomach. I knew it was my job, but I couldn't tell my stomach. It was just very vulnerable. You don't know what's too much. You want to do it real. You want everything to be real. That was the most vulnerable I've ever been."

5. When she talked about the lack of confidence there is in female directors

6. When she talked about the complexities of motherhood

Though JLaw has expressed her thoughts on marriage, it was interesting to hear her take on the politics of being a working mother. "Women get frustrated that we don't get paid enough and then the republicans or the CEOs that are men say, 'well, it's because women took off time for maternity leave.' It's interesting to hear a woman say, 'well, yeah. We are mothers, and it is different.'"

7. When she talked about why she acts