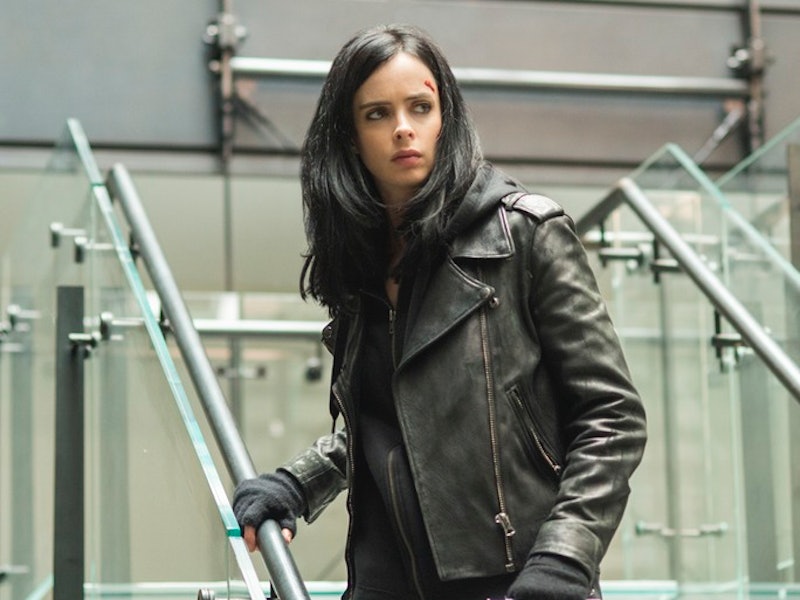 If you're on the fence about sacrificing your weekend to binge-watch Jessica Jones, let me tempt you with this: Jessica Jones' style epitomizes normcore, and is an inspiration for those of us who really don't spend more than 30 seconds considering our outfit of the day. While you should totally watch the show for its depiction of a female antihero (a rare archetype considering how oversaturated the market is with Mr. Manpain, its male counterpart), its neo-noir trappings, and its willingness to tackle hot issues, such as — spoiler in the following link — a woman's right to abortion, Jones' costumes are a refreshing departure from the standard "I don't care about clothes, but I tripped and fell into Gucci this morning" model that many small screen female characters are forced into.

Jones struggles with residual PTSD from an encounter with Big Bad Kilgrave, who can control minds with a mere suggestion. She experiences regular flashbacks to Kilgrave's abuse, which she medicates with booze, booze, and more booze. (I was dismayed at a scene in which she requests the cheapest whisky at a liquor store, and the bottle the clerk hands her is the stuff I buy when I'm feeling like a spendthrift). Jones does not take care of herself, and that extends to her clothing. Costume designer Stephanie Maslansky tells Fashionista that everything in Jones' closet — leather jacket, tank tops, and relaxed fit jeans — was chosen with this in mind.

"[Jessica] considers her clothing to be an armor and a shield and something that helps her maintain a distance from other people and privacy," Maslansky says, "It keeps her from having to deal with the rest of humanity in a certain sort of way." The leather moto jacket Jones favors is a last-season Acne piece, which Maslansky and her team distressed in-house. "[The jackets] were really sanded and scrubbed and alcohol was applied to take the shine off," Maslansky explains. "Silver snaps were scratched and rubbed to make it look as though it was a really, really old jacket."

Maslansky has worked with Marvel in the past — she was the costume designer for this spring's Daredevil — and she is set to continue her work in the upcoming Luke Cage. While I look forward to seeing more of her work in Luke Cage, I hope Marvel gives Maslansky the chance to design for female superheroes that, like Jessica Jones, are the star of their own shows. In the meantime, let's break down Jones' uniform.

The leather moto jacket is Jones' first layer of armor.

The second layer of armor.

A casual hoodie layered under the leather jacket keeps Jones warm while she's staked out on fire escapes overnight.

At least Jones' palette of gray, white, and black is consistent.

Maslansky imagines that Jones "wears one of three pairs [of jeans] every single day, depends on which one is cleanest."

No walking Hell's Kitchen in heels for Jones — she favors a low-heeled boot. Moto style, of course.