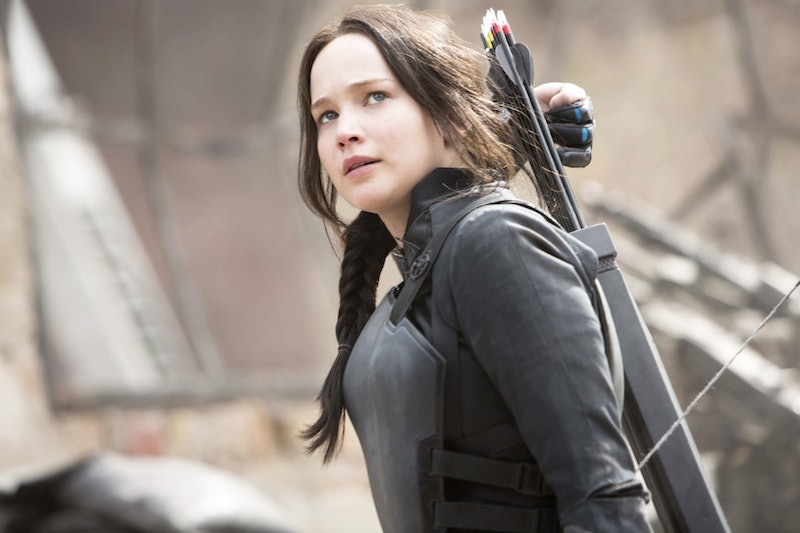 It's been quite a week for fans of The Hunger Games. After three books and four movies, with the release of The Hunger Games: Mockingjay, Part 2 the franchise has finally come to an end. When the adaptations of Suzanne Collins' dystopian YA novels first arrived on screen, fans were really only hoping for one thing: For the filmmakers to do what almost never happens with book to film adaptations — not screw it up. Thankfully, and by some force of magic at the hands of Lionsgate, The Hunger Games movies practically exploded, pleasing fans of the books while bringing in a whole new audience.

Not to say that the films' enormous success wasn't a little surprising. The type of commotion it stirred up, that deep admiration and support for the franchise, has only come around a few times in cinematic history (Star Wars, Harry Potter, and Twilight most notably). And this type of commotion? Well, it was especially prevalent during the month of November. The month that all fans now know as the unofficial "month that Hunger Games comes out!" (Sorry, Thanksgiving, you've been overshadowed.)

At this point, it's probably sinking in for you, and you're being reminded of a cold, hard truth: that come next November, we won't have a new installment of The Hunger Games to look forward to. Sit down for a moment if you need while the weight of that realization hits you. Once you've processed that, get ready, because I'm about to hit you with some more sad statements. Here are eight things you'll miss about November from now on, since The Hunger Games has ended.

Technically, I could put every single character on this list and make a case for why you will miss them (which, trust me, I was tempted to do, but there are only so many hours in a day), but there's something that needs to be noted about Katniss. As one of the most dichotomous, well-rounded female heroines ever, she has done something huge for the movie industry: proven that female-led films can dominate the box office. Although we will see much more of J. Law as the years progress, her role as Katniss Everdeen will (probably) always be imitated, but never (and I mean never) duplicated.

What else kept you up late at night in the weeks leading up to the films' release besides waiting for more teasers and real trailers for The Hunger Games to drop? (OK, besides fan fiction? I don't know you, no judgement.)

Again, what else did you stare at endlessly and dissect every last detail of? Those posters. Not only were they gorgeous, they were often laced with clues.

That song will always bring you chills. You will be 87 years old, hear that song, and be transported right back to 2012, I promise. If it doesn't happen, call me, and I'll give you $5 for being wrong.

5. The Relationship Between Peeta & Katniss

A relationship that stemmed from survival grew into admiration and then love. Narratively speaking, it was an interesting love story to witness, because it was never black and white, and felt much realer than your typical "love at first sight" story.

Not since Gilmore Girls' Team Jess vs. Team Dean or Twilight's Team Edward vs. Team Jacob debates have people been so heavily involved with a fictional character's romantic choices. I'm telling you, if you ever want to exercise your debate skills, try to be Team Gale for a day (because you have the weaker argument, obviously — #TeamPeeta4life).

The chemistry between these three, and the genuine friendship it looked like they shared, was enough to get you even more heavily invested in the franchise. Can they keep doing interviews together, even if they're not sharing any projects? Please?

8. Comparing The Books With The Movies

Though The Hunger Games movies were impressively faithful to the books, narrative-wise, it was also a fun journey to look back at the books and make mental notes of what the filmmakers left out your favorite secondary plots or characters (and then tweet them asking WHY?!).

On that note, at least you can still revisit the books and films to quell your sadness every November (or any time of the year). Or here's a pro tip: Hold movie marathon screenings every November. For the rest of your life. Like everyone Panem lost, The Hunger Games franchise deserves to be remembered.