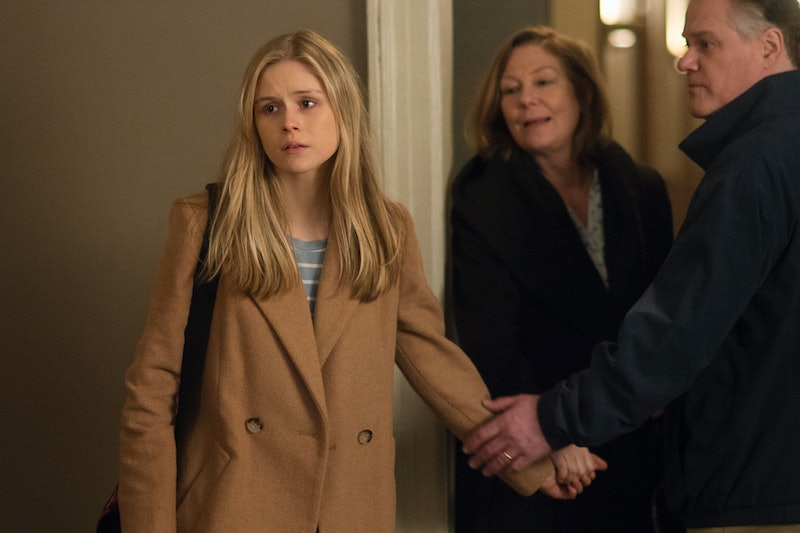 Introduced in the pilot episode of Jessica Jones , Hope Shlottman at first seems to be part of a fairly cut and dry case for Alias Investigations. She’s a missing college student/track star with proud-yet-concerned Midwestern parents, and her friends suspect her absence can be explained by what they believe is a whirlwind romance with a new boyfriend. But since this is Jessica Jones we’re dealing with here, the rabbit hole turns out to be a whole lot deeper — and darker — than it seems. Spoilers through Episode 6 of Jessica Jones ahead.

Things turn ugly in a hurry when it’s quickly revealed that the man Hope's friends are referring is none other than the aptly-named Kilgrave (as Jessica quips in a later episode, “Was ‘Murdercorpse’ already taken?"), who has used his powers of mind control to kidnap and rape her. Familiar with his disturbing M.O. (which includes, fine dining, five star hotels, and forcibly bought and worn fancy lingerie), Jessica manages to rescue Hope from his clutches — until it turns out that Kilgrave had even more torture in mind for Hope, forcing her to shoot both of her parents in cold blood after they were reunited.

Unfortunately for Hope, Jessica finds it's tough to make anyone else believe that the college student wasn't at fault for shooting her parents — even in the Marvel Cinematic Universe, where people occasionally reference the alien attack on New York seen in the first Avengers film. Hope is quickly put into prison, where her best case scenario is a plea deal for 20 years, and her worst case scenario is a life sentence. Things get even worse when Hope realizes she's pregnant with Kilgrave's child, leading to a refreshingly honest (though no less heartbreaking) look at rape and abortion (just one of many factors that makes Jessica Jones a groundbreakingly feminist show).

True to her name, Hope — or perhaps it's more the idea of Hope, and what she, like Jessica, has been forced to live through — quickly becomes something of a moral compass for Jessica; a reason to keep fighting even when everyone is telling her to hang up her (metaphorical) cape for good. After all, it's Hope's kidnapping that first puts Kilgrave back on Jessica's radar, and it's her subsequent imprisonment for a crime she didn't commit that keeps Jessica focused on taking him down.

For her part, actress Erin Moriarty (who you might recognize from her turn as Audrey Hart on True Detective) enjoyed portraying her character’s turmoil, as she told Comic Book Resources, "It's fun as an actor, it's very dramatic, there's never a dull moment. It's like, it's kind of juicy almost. That's an actor's dream to have those kind of dramatic storylines."

Though not always central to the main plot, Hope is a key part of Jessica Jones, drawing Jessica not only back into Kilgrave's orbit, but ultimately back into the life of a superhero.

More like this
Here’s How 'House Of The Dragon' Diverges From The Book’s Timeline
By Allyson Johnson
Everything To Know About 'And Just Like That...' Season 2
By Jack Irvin
Does The 'Echoes' Ending Mean There Will Be A Season 2?
By Kadin Burnett
An Ultimate Guide To The Music Of 'Rap Sh!t'
By Brad Witter
Get Even More From Bustle — Sign Up For The Newsletter