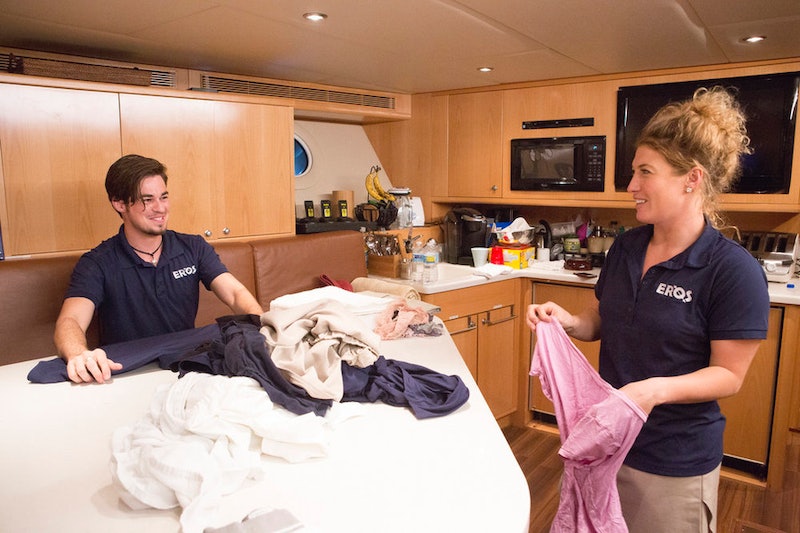 Rocky Dakota was a polarizing figure on this season of Below Deck, but according to a Bravo blog post that caught up with the cast after filming was long over, she's still BFFs with almost everyone. "I'm still friends with Emile, and if you were wondering, he did actually come out to California to visit me," Rocky wrote. However, on Twitter, Kate contradicted her, writing that Emile actually didn't wind up visiting Rocky at all. So wait, did Emile visit Rocky in LA after Below Deck, or didn't he? It depends on who you ask.

Seriously, Emile didn't even clear things up with his response to Kate's accusation. He just tweeted, "Wonder why it seemed that way?" in his initial response, which doesn't really make any sense at all. He then tweeted a tease for the upcoming reunion, asking "Did I go to Cali?" suggesting that only the reunion could adequately explain how and why he either did or didn't visit Rocky in California. I sense a potentially dramatic story here (or a potentially embarrassing second date attempt on the west coast from Emile), and this weird social media back and forth has totally sold me on tuning into the reunion show.

Making things even more complicated is that Rocky has already admitted that her response for the blog was full of "jokes" that really were just elaborate lies. She says that Kate, Captain Lee, and Connie all "hate" her, but didn't share if the Emile portion of the post was also fabricated.

Rocky added that Kate was trying to make it sound like she was a liar because "she doesn't want anyone to believe what I have to say on the reunion."

But she also says that she likes Emile and wishes him well in dating someone else.

Strangely enough, even though you'd think there'd be tons of Instagram evidence of this supposed California trip, there's not so much as a single selfie of those two together. But Emile has been on a nonstop transcontinental trip since the show ended, and he's been posting plenty of pictures all over the world, so it seems unlikely that Rocky really did show him around LA.

Emile has one picture of himself and Rocky, but it seems like it could date to while the season was filming.

Even though the whole thing is needlessly confusing for some reason, the Below Deck reunion should be able to clear things up. Hopefully, Andy Cohen is willing to ask Rocky directly what the heck was up with her answers to that blog post, why she decided to "joke" about them, and if there's anyone that she's still friends with for real.