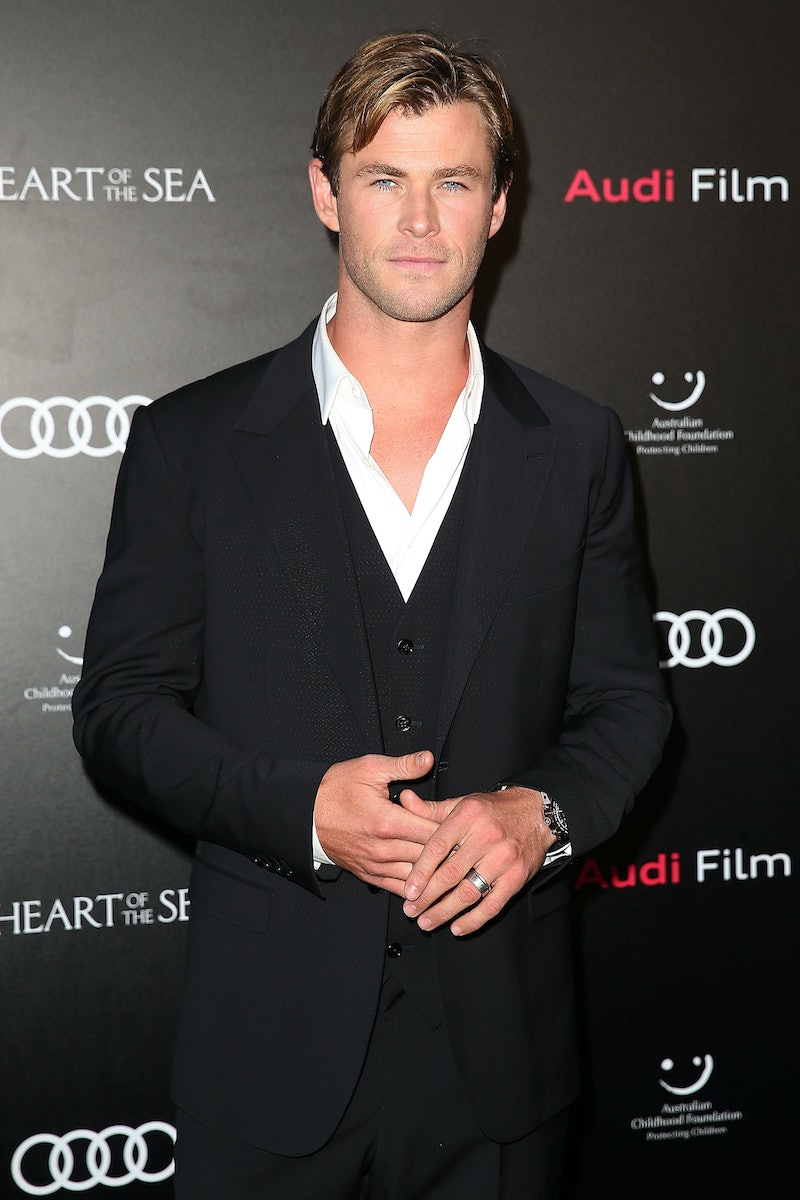 When thinking of Chris Hemsworth, a few things come to mind: his recurring role as Thor in the Marvel franchise and his award of People 's Sexiest Man Alive 2014. Although it seems a bit unfair to focus on his physique, the fact that he's got a chiseled body undeniably plays a significant part in both of those titles. But for the upcoming movie In the Heart of the Sea, the actor drastically slimmed down. Based on a recent photo he shared on Twitter, Chris Hemsworth is completely unrecognizable. In an interview with Entertainment Weekly, Hemsworth talked about his dramatic weight loss for the movie, which he deemed exhausting. He said,

When you’re already starting off lean, it's brutal to chew through that kind of weight. Every pound feels like a kilogram.

Hemsworth's tweet echoed similar sentiments, saying, "Just tried a new diet/training program called ‘Lost at Sea.' Wouldn’t recommend it." Clearly it's been a tough journey for Hemsworth, but this does prove his dedication to his craft. According to Entertainment Weekly, Hemsworth and the movie's other actors only consumed 500 calories a day. Yikes!

Based on a book by Nathaniel Philbrick with the same name, In the Heart of the Sea is a true story about the whaling ship that inspired Herman Melville's Moby Dick. In 1820, a ship named Essex was struck by a whale and sank. Hemsworth plays Owen Chase, the ship's First Mate.

Promoting the movie further, Hemsworth participated in a Twitter chat on Sunday afternoon. He revealed quite a bit about the role. Here are a few highlights!

Although he's very dedicated to the role, I appreciate that he's not glamorizing the weight loss. He admits that he doesn't recommend it and that it was tough to do.

2. His Character Is Honorable

Fans were able to learn more about Hemsworth's role. Oh, and the "hungry" comment? Definitely warranted.

3. A Lot Of Research Went Into The Role

Not only did he diet, but he trained his brain too. He made sure he got the character just right, based on historical research. It's also awesome that he attended sailing school.

4. There Should Totally Be A Crossover

Hemsworth says he wished Thor saved the stranded boat. Do I sense a future crossover movie in the works?

5. Fans Can Expect A Major Adventure

In case you need incentive to get to the theater on Dec. 11, Hemsworth shared this plot summary.

6. He's Rooting Against His Brother

OK, this has nothing to do with In the Heart of the Sea. Instead, he's weighing in on the epic Hunger Games debate about who Katniss belongs with. Hilariously, he sided against his brother Liam Hemsworth's character Gale. Well-played, Chris!

All joking aside, In the Heart of the Sea seems like a must-watch movie to me, and Hemsworth's dedication to the role certainly speaks for itself.