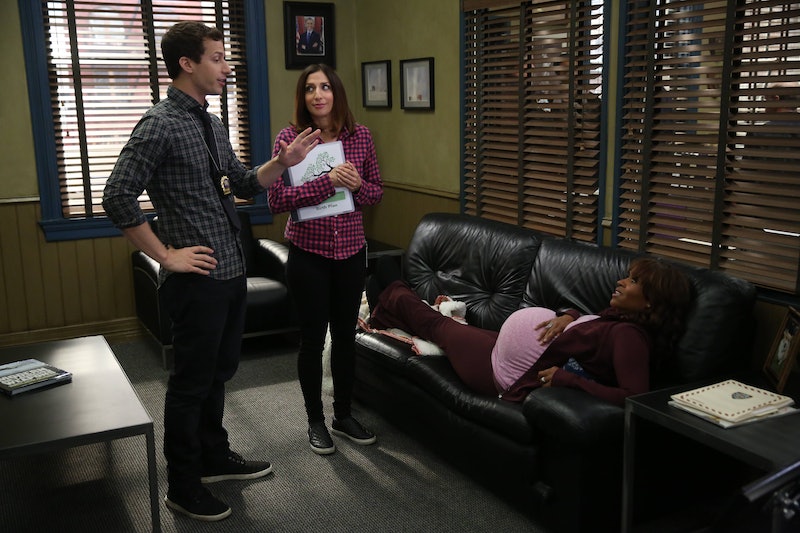 Since Brooklyn Nine-Nine is a workplace comedy, it's always interesting to see how the show handles its annual Thanksgiving episode since this is a holiday that is all about family and the home-cooked meal to end all home-cooked meals. Though Brooklyn Nine-Nine set its Thanksgiving episode in the precinct once again this year, it was definitely still all about family. Terry's wife Sharon went into labor, which would have been something to be thankful for, except for the fact that Jake was in charge of making sure she had a successful delivery.

Of course, it wasn't supposed to happen like this. Terry and Sharon were supposed to go away for the holiday to have one last hurrah before the new baby arrived. But first, Terry and Rosa had to head out to Rikers Island to question an inmate that may know something about a murder case they were trying to solve. In the meantime, Sharon arrived at the 99th Precinct. Jake was just supposed to make her remain comfortable as Sharon waited, but instead, her water broke, and a Brooklyn Nine-Nine baby was on the way!

But childbirth is never easy, especially in TV land. After a horrible time at the hospital when their twins Cagney and Lacey were born, Terry and Sharon decided that she would use a doula instead. Unfortunately, both Sharon's doula and back-up doula were unavailable due to the holiday. That meant Jake basically had to step in and be Sharon's doula, or "vaginal Gandalf," as he liked to put it.

With Terry and Rosa gone, Amy and Charles feverishly completing important paperwork by hand because the precinct's Internet was down, and Gina a mess at the very thought of childbirth, Sharon really only had Jake to rely on. Though you would think the always calm, cool, and collected Captain Holt would be a big help in a situation like this, he was off being bitter since Jake had told him to keep his awkward self away from Sharon, who he always managed to somehow make uncomfortable.

Unfortunately, Jake's Barry White voice, Hitchcock and Scully almost burning the precinct down, and Gina's cuddling when she came to didn't help Sharon one bit. Finally, Jake broke down and begged Captain Holt to ask his ex-boyfriend Frederick (played by guest star Nick Offerman), who is an OB/GYN, to come by the precinct and help Sharon have a successful delivery. After much prodding, he finally did, even pretending to own up to an antique duck's disappearance, which was one of the reasons they broke up, which actually did turn out to be Captain Holt's doing.

Of course, he told the Brooklyn Nine-Nine gang that Sharon really needed to have her baby in a hospital, so they rushed her to one as they still waited for Terry to be by his wife's side. New York's public transportation and traffic are not kind to anyone, especially when you desperately need it to be, you know? When Terry did eventually arrive, he was livid that Jake had disobeyed his orders by bringing Sharon to the hospital.

But in the spirit of Thanksgiving no one could stay mad at anyone for long. Sharon gave birth to a little girl named Ava, and Terry thanked Jake for actually saving the day by allowing him to be the first from the 99th Precinct to welcome his daughter into this world.

That's the thing about Brooklyn Nine-Nine. As much as the show knows how to lift your spirits by delivering non-stop laughs, it also knows how to make you melt from all the warmth in your heart. Mission accomplished, you guys.