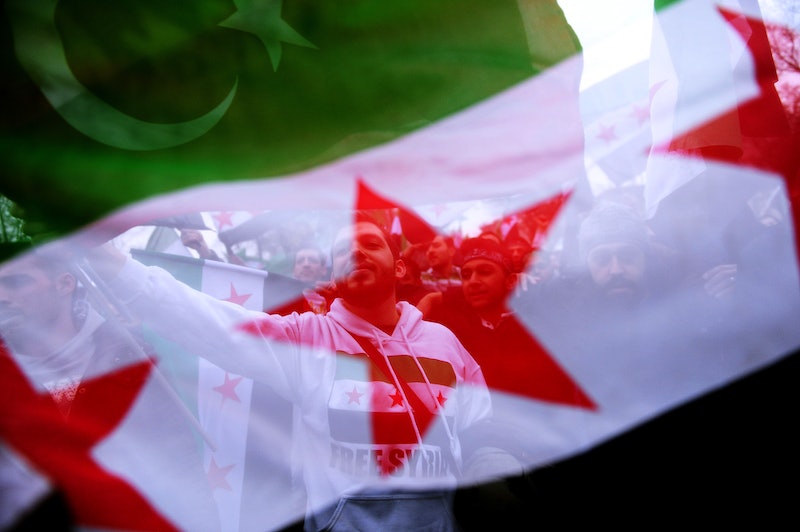 There's a good chance that the conflict in Syria will quickly grow into a heated topic of family discussion this Thanksgiving, but a variety of resources can help explain what's happening in Syria. These visual explications and charts offer vital background knowledge that will ensure you arrive to dinner well-informed. The Syrian civil war is a conflict wrought with numerous contributing factors and controversial implications, including the migration of Syrian refugees, the United States' and Russia's disjointed responses to President Bashar Al-Assad, and disagreement over military strategies for toppling ISIS's stronghold. Unconventional resources, such as comic strips and short videos, offer both visual representation and simplified explanations of why Syria is in danger of becoming a failed state and how it's affecting the Syrian people. Understanding the civil war's toll on its own population is paramount and requires both empathy and a close look at the numbers.

Syria moved into the spotlight in April 2011 as an "Arab Spring" nation whose people began peacefully protesting President Assad. The regime responded by employing chemical weapons against his own people, cracking down on activists, and killing civilians indiscriminately. And civil war ensued — civilians versus Assad and his supporters. These next resources will shed light on what led up to the protests and what we need to understand about the Syrian refugees that have been displaced as a result.

What Sparked The Conflict In Syria?

This simple cartoon comic strip provides a comprehensive precedent for the Syrian conflict by referencing the protests both in Egypt and in Tunisia and citing the primary instigator for concern — a five-year-long drought that brought rural farmers into an already crowded city. The focus on the role of environmental stress offers a less mainstream angle from which to view the conflict. After farmers migrated to Daraa, public goods such as water became scarce. Assad made no efforts to ameliorate the crisis and instead punished or killed those that spoke out against him. The text is as brief as possible, making the cause for conflict less overwhelming to fully absorb.

Who Supports Who In The Syrian Conflict?

Vox created a comprehensive video that uses maps to explain the role of Iran, Russia, the United States, and the Gulf states in the conflict. By dividing the Middle East into red and blue states, the video illustrates which nations support Assad and which support the rebels, who were later joined by militant extremists (as the video points out, Assad wants the rebels to be joined by extremists, as it makes it harder for foreign nations to back the rebels). Conveniently, this divide also represents the sectarian division between Sunni nations, which largely support the rebels, and Shiite nations like Iran, which supports Assad. It's important to remember that although Assad has committed atrocities, lending weapons to the rebels is not necessarily a sound solution. These weapons often land in the hands of militant extremists, making each nation's solution — supporting either the rebels or Assad — problematic. In other words, there are no two single sides to the conflict.

How Does Europe Tie Into The Refugee Problem?

A particular YouTube video gained recognition from various news media organizations for breaking down the Syrian refugee problem and how it relates to Europe. The narrator addresses common concerns among European host countries that Syrian migrants will cause an uptick in crime rates and fail to contribute to the existing population. The video features various sources and converts them into a cartoon to explain that many of these concerns are simply misconceptions.

Who Are The Refugees?

This chart, published by the United Nations Refugee Agency visually outlines the Middle Eastern migrants who have come to settle in European countries in 2015, 52 percent of whom are Syrian.

How Many Refugees Are There?

Another United Nations chart outlines the number of refugees accepted by each Western nation as of Nov. 17, 2015. It says that the United Nations High Commissioner for Refugees has submitted 22,427 refugee applications to the United States for consideration, and less than 2,000 have been accepted since the civil war began in 2011. In total, 128,513 visas have been pledged in total by Western nations, covering less than three percent of the total refugee population of over 6 million.

How Do Refugees Enter The U.S. & Can Governors Stop Them?

Over half the United States' governors have declared that they will not let Syrian refugees enter their states. This has become a huge topic of debate, but the fact is that governors simply don't have this power. Their hesitancy, instead, sparks fear among the American people over accidentally welcoming terrorists into the United States. This Politifact fact sheet succinctly explains the United States' process for screening refugees and granting them entrance, as well as the number of refugees Obama has pledged to accept in the future. If you're wondering how the United States, in particular, fits into the refugee equation, this is your source.

What Can We Do?

A White House press release, which starts with an anecdotal account that puts the reader in a refugee's shoes, explains what the United States is contributing to Syria, in terms of financial aid, and suggests ways that we, too, can help. Whether or not the United States is reacting to the situation accordingly is arguable; nonetheless, it's important to understand the United States' response and the president's reasoning behind his decisions.