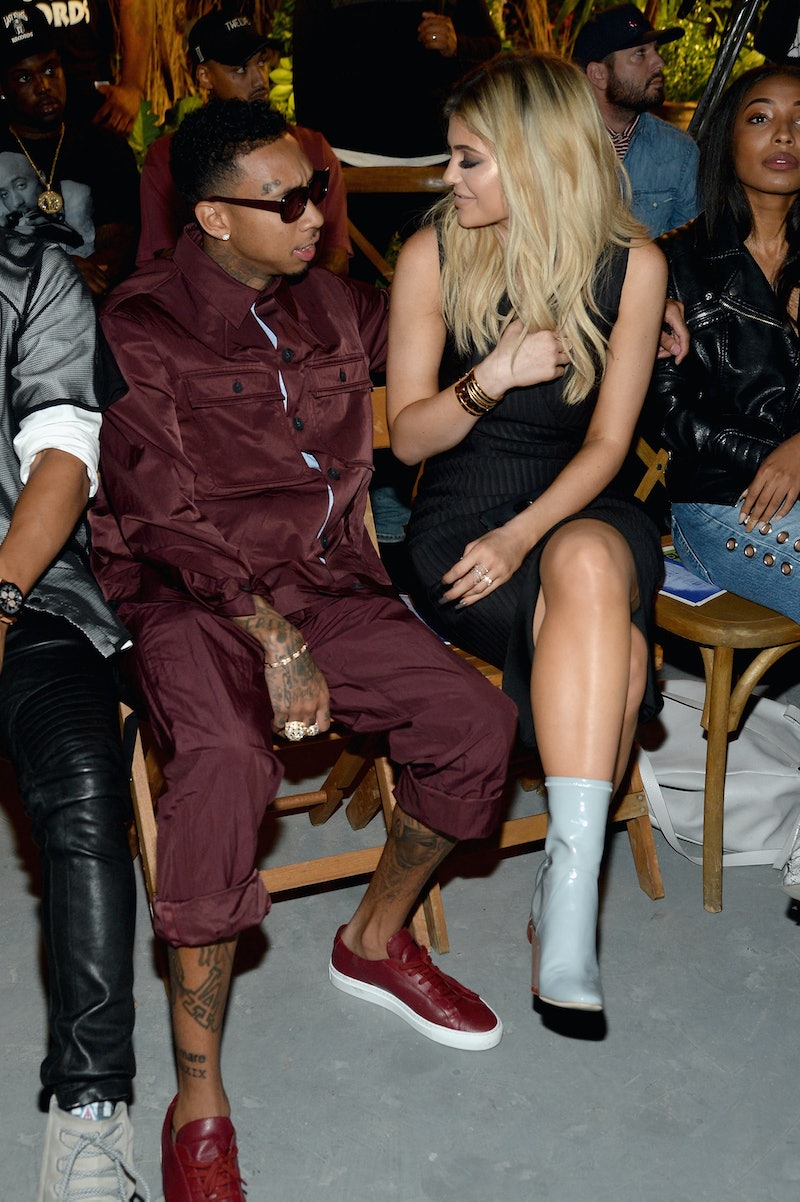 Last week, news broke that Kylie Jenner and Tyga split up. Admittedly, I cared way more about this than I should have, wondering, "Is there no such thing as true love anymore?" That's because the breakup seemingly came out of nowhere, and it was sad to see another Kardashian-Jenner power couple come to an end. But then, I realized I may have given up hope on these two too soon. Over the weekend, Kylie Jenner posted a suspicious Snapchat, laying next to someone who looked like Tyga. Granted, you can't see his face in the picture, just a tattooed hand and the caption "everyone needs to chill." Fans of the couple quickly viewed it as a sign of a reconciliation. In case anyone still has doubts, Kylie Jenner and Tyga made their relationship status pretty clear on Sunday night. Putting the breakup rumors to rest, the pair attended Justin Bieber's AMAs afterparty together. According to E! News, an inside source said,

This is not the first time or the last that Kylie and Tyga will breakup to makeup. Kylie and Tyga's age difference does add a bit of pressure to the relationship. Tyga is a father and has had more relationship experience than Kylie, she's still growing up.

Very interesting! There certainly is quite an age gap — Jenner is 18, while Tyga is 26. But still, the pair had been together for awhile and through plenty of ups and downs. Giving more intel into the situation, E!'s source also added, "Although she loves Tyga, Kylie straddles the fence and she wants to have her fun and wants to play the field a little. Every other month she's telling him she needs her space. Tyga wants more of a commitment. They love each other and will get back together."

Since the source said Kylie Jenner and Tyga "will get back together," does this mean they're not actually together just yet? If Jenner's Snapchat is any indication, these two are hanging out again — which means either way, they're not out of each other's lives entirely. Here's another reason I doubt they're officially donezo: Last night, Jenner posted a new Snapchat of Tyga. He's all dressed up and dancing around a fancy lobby. I'm guessing this was either before or after the aforementioned AMAs afterparty.

The lesson here? Don't believe everything you read about Kylie Jenner's life — including any breakup rumors. The truth is in the Snapchat stories; that's where she sets the record straight.