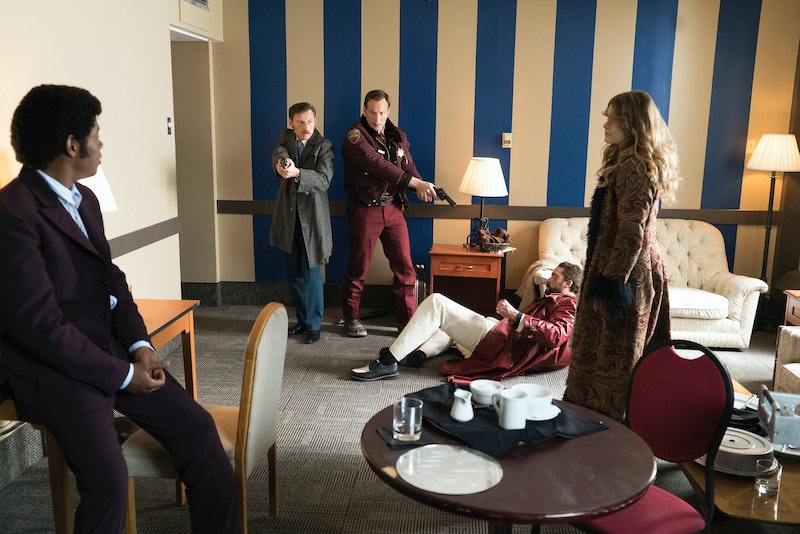 If you thought Season 2 of FX's Fargo was going to have a happy ending, then you really haven't been paying attention. While Lou Solverson and his young daughter Molly are safe — since we know they survive until the events of Season 1 (which takes place 29 years after Season 2) — pretty much everyone else is fair game. But that doesn't mean there aren't certain characters fans are hoping would make it out alive. Simone Gerhardt, the free-spirited daughter of the domineering Dodd, was likely one of those; but in this episode, the young woman's betrayal of her family finally caught up with her. That's right: Simone was killed on Fargo this week... or was she?

Last week, Simone told her lover Mike Milligan that her dad and all his cronies had left the Gerhardt farm to go after the "Butcher of Luverne" in Minnesota. Rather than taking the opportunity to ambush Dodd away from home, Mike and the rest of the Kansas City mafia took advantage of his absence to assault the unprotected farm — with Simone inside it. While she and her grandma Floyd survived, ailing patriarch Otto was finally offed for good.

In this Monday's episode, "Did You Do This? No, You Did It!", Simone was understandably pissed at Mike — not just for deceiving her and murdering her grandpa — but for not caring if she, Simone, had been killed in the crossfire. The minute Otto had been lowered into his grave, Simone took off for Mike's hotel to give him a piece of her mind... a rash action that would prove to be one of her last.

It became belatedly clear to Simone that her only value to Mike was as a pawn in his war against her family. Although she had freely given him information (in addition to sex), she was no worth more to him as a bargaining chip, knowing that Floyd would do anything to get her eldest grandchild back safely. Just when things were looking bad for Simone, Lou and Ben Schmidt burst in and freed her from the Kitchen Brother's clutches. But Simone didn't get very far...

In the parking lot, her uncle Bear was waiting for her. Although Simone tried to come up with a lie about buying a dime bag of weed, Bear knew the truth: she had been betraying the Gerhardts all along. Wordlessly, he drove his niece to the outskirts of town, walked her into the woods, told her to get on her knees, pulled out his gun, and...

The camera cut to an overhead shot of the pair followed by a series of wintry landscapes, as the sound was replaced by the haunting tune of "Danny Boy." We never heard the gunshot, we never saw Simone's body fall. So is she really dead? Just before the end, the young woman begged for her uncle to banish her rather than kill her. Could Bear have caved at the last moment and let Simone go?

Television has been full of ambiguous deaths lately: Jon Snow, Glenn Rhee, Kevin Garvey. All three of those men turned out to be alive (assuming the theories about Jon are true, of course), so Simone's chances of survival seem high. However, this is Fargo we're talking about, which has been fairly merciless when it comes to deaths this season. Perhaps the only reason we didn't actually see Simone's death was so we wouldn't have to witness a young woman being shot execution style while begging for her life on her knees.

Was the scene being sensitive to its viewers or ambiguous about its characters? It's hard to say. Three episodes remain in Fargo's second season, so there's still plenty of time for Simone to make a surprise return. But let's be real: with events still heading inexorably towards the "Sioux Falls Massacre," there's a chance she wouldn't make it out of Season 2 alive even if she did come back before the end.