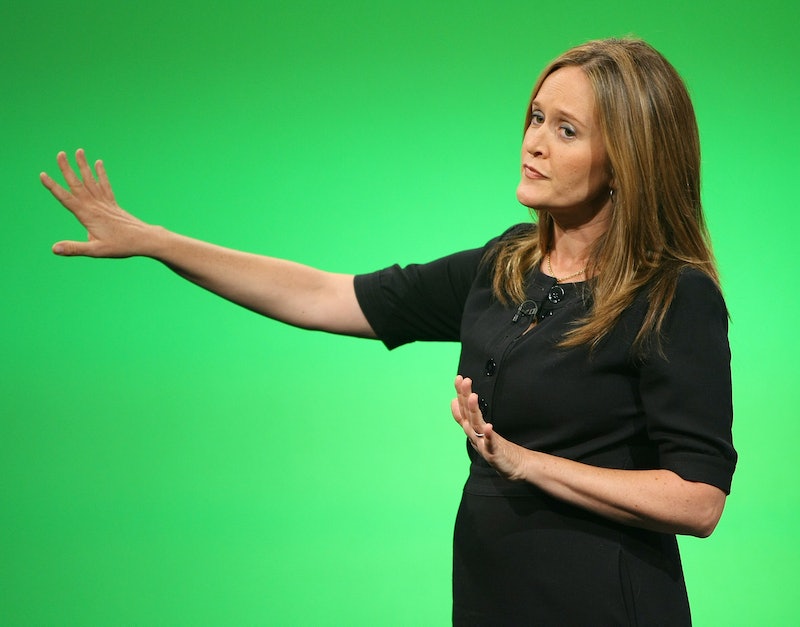 I never thought I'd say this, but I just watched the promo for Samantha Bee's upcoming show Full Frontal , and I am so so glad that she didn't end up taking over The Daily Show when Jon Stewart left. Since we're being honest with each other, having to deal with the departure of Bee and Jon Stewart himself in the same year was pretty tough. I felt almost personally slighted that Bee couldn't stick with us to the end, like at least waiting with us at the bus stop until our brand new parent gets there to pick us up. (Sorry Trevor Noah, you seemed great, but even Jessica Williams admits it's weird working with someone new. Although, I have to say, he's done such a great job with the show so far that I've already been converted to a huge fan of the new guy.)

Anyway, I had trouble understanding how she could just abandon us like that, but, now that I've seen video from Full Frontal , which premieres on TBS in February 2016, I totally get it. Because she's just having so much fun. I'm sure Bee had a great time on The Daily Show, and she certainly left her mark there, for which I'll always be grateful, but she put in her time. Bee was the longest-running of any of the correspondents, working the desk for 12 whole years. So, yeah, if she doesn't think she's a good fit to run the whole show, I'm inclined to believe her. And seeing her in action in this clip sure helps.

It seems like it's supposed to hook people in by mimicking a Star Wars commercial, to get people watching, and then, about a quarter of the way through the video, she delightedly throws back her hood and starts wreaking deadly, hilarious havoc with the lightsaber that she doesn't know how to work. It's a simple concept, but you can just see in Bee's face how much joy it gives her to be able to do exactly what she wants. I can't wait to see more of that next year when this show hits the air. Take a look for yourself.

See what I mean? She's just so happy to be there, and the possibilities are endless, because she isn't taking the reins on a show that was already run by someone else for a gajillion years. Bee has a clean slate, a great attitude, and she will have my complete and total attention the moment Full Frontal hits my TV screen.