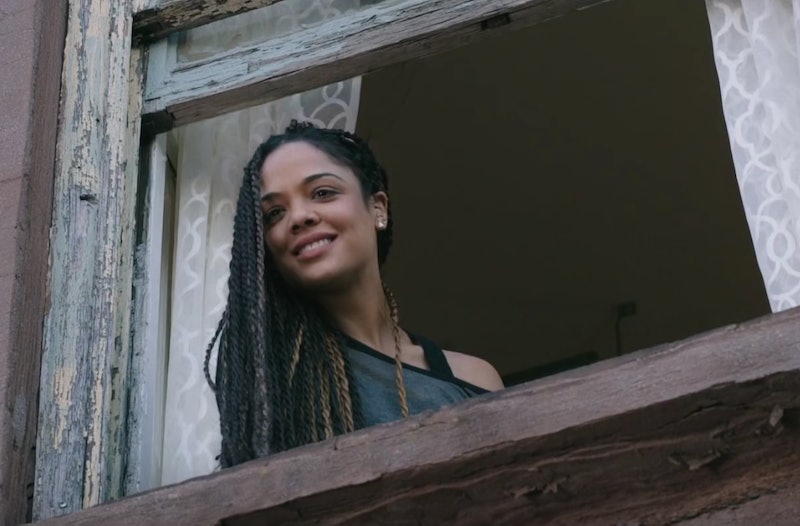 Rocky doesn't exactly scream feminist masterpiece, so it's not surprising that Creed , the newest installment in the Rocky franchise, doesn't have that many female characters in it. The movie features just two women: Mary Anne Creed (Phylicia Rashad) and Bianca (Tessa Thompson), both supporting characters who appear only in a handful of scenes each. The two never interact (Bechdel Test fail), and Mary Anne only appears in a few short instnances during the beginning and tail end of the film, making her presence less than memorable. It really wouldn't be too big of a leap to say that Creed only has . Yet despite that fact, Creed is a feminist film, all thanks to its one fully realized female character, Bianca..

In the movie, Bianca is introduced as a romantic interest for Adonis "Donnie" Creed (Michael B Jordan). In traditional meet-cute fashion, Adonis and Bianca meet when Adonis goes to ask his downstairs neighbor to turn down her loud music and finds that said neighbor is a beautiful girl. (She shuts the door in his face.) Yes, I know, hearing that the most prominent female character in Creed is a girlfriend character might not be too promising, but stay with me.

The next time the two cross paths, Donnie stumbles into a local club where Bianca is performing with her alternative pop band. It's a wordless scene — Donnie and Bianca do little more than stare at each other while she performs — but an important one. It would have been easy to put Bianca on display, as, after all, she is singing on stage in the scene, but director Ryan Coogler (Fruitvale Station) instead uses the scene as an opportunity to give Bianca her own identity before making her Donnie's girlfriend. Even more impressive is the fact that Coogler does so without objectifying Bianca and putting her in a skintight dress and sky high heels. In fact, Bianca's wardrobe throughout the film is mostly simple, tailored shirts and pants.

Bianca has a distinct style that isn't influenced by a Hollywood film's need to satisfy teenage lust or expectations of traditional Euro-centric, white beauty. For example, when Bianca goes to support Donnie at his first big fight, she wears jeans and a button down flannel. Plenty of other movies would have her in a tight skirt and crop top, but not Creed. It's not that she doesn't look beautiful or make an impression, as she does. The wardrobe simply emphasizes the fact that Bianca is her own person, her own character, not there simply to satisfy Donnie or a male audience. To that end, Bianca's hair, worn in long twists, is also a significant sign of the character's rejection of Hollywood norms. As Thompson told Buzzfeed, "Our approach to her look was not with a tremendous amount of concern for satisfying the pretty eye candy space that those characters can sometimes occupy. It's challenging that."

Her look aside, Bianca is given room in the film to have a narrative purpose other than just giving Donnie the courage to fight in the ring. Over the course of the film, Bianca is established as a strong, independent young woman who happens to be in a relationship with the film's protagonist. She has her own problems — her hearing is deteriorating and she recently started using hearing aids, as well as her own successes — three of the character's original songs are featured in the film and the soundtrack.

The character of Bianca lives beyond the story told in Creed, a rare feat for the "girlfriend" character in a sports movie. It's one of the reasons Thompson, best known for her breakout in last year's Dear White People , was so eager to take the role. "I'm so proud of the movie because I feel like it's a brave new world in the sense that people are interested in female characters not just being an object in the narrative but being the subject of the narrative. I think that's becoming the new expectation in a way, and I'm really happy that Creed satisfies that," Thompson told Buzzfeed.

Looking at the trailer or poster, it might seem strange to say that Creed might have given audiences one of the best original female characters in current cinema. But make no mistake, Bianca is as crucial a character in Creed as Adonis himself. If this is the future of sports movies and "girlfriend" roles, I'm on board.