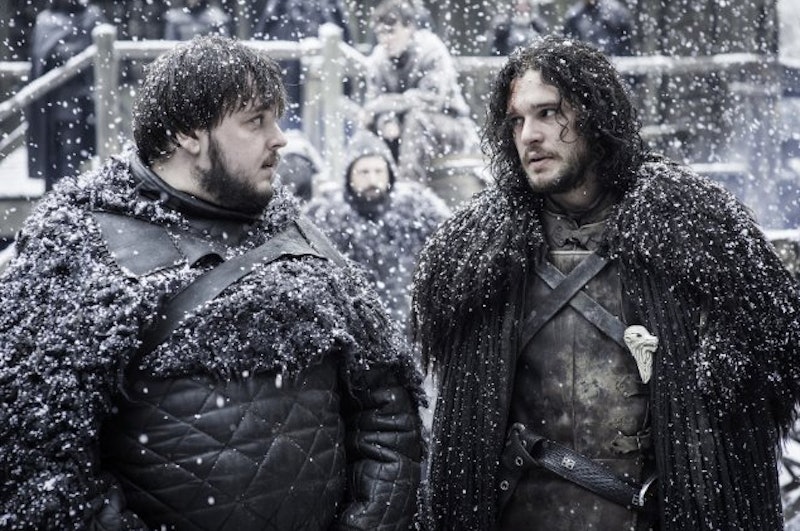 OK, so we're all feeling a lot of things after the Season 5 finale of Game of Thrones, I get it. And let me just say right off the top, this post is going to be spoiler-heavy, so if you haven't yet watched the finale, you need to scoot out of here. Right now. Bye! OK. So if you've read the books, or Bustle's article from two weeks ago predicting that Jon Snow would die based on the "Mother's Mercy" synopsis, or if you've been on the internet recently, you'd know that everyone's favorite bastard was expected to die in the finale, which is exactly what happened. That much we can all agree on. What we don't agree on is what this means for the show. In interviews with many outlets, including Entertainment Weekly Jon Snow actor Kit Harrington insists that he won't be on Season 6 of Game of Thrones: "I’ve been told I’m dead. I’m dead. I’m not coming back next season. So that’s all I can tell you, really." But that hasn't stopped any of us from speculating on how Jon Snow could come back, somewhat supernaturally.

The newest theory is one that comes from repeated viewings of Snow's death scene last night, and has to do with the way his blood spread across the snow. (And if you think it's grasping at straws to look so closely at such a small detail, then you haven't been on the GoT boards, my friend.) As Snow lay dead in the snow, staring up at the sky, having been stabbed by his own men, the blood flowed out of his body in a pattern that — the more I watch it — resembles a spreading, blood-black dragon's wing. Check out this screen grab from the final moments of Season 5:

Doesn't that totally look like a growing dragon's wing, ready to be unfurled? It's an especially compelling piece of imagery because of the lore surrounding the hero who saved the world from the White Walkers the first time around, whom prophecies insist will return to do so again. This figure is often called Azor Ahai, the Lord's Chosen, and the Prince Who Was Promised, and a very specific set of circumstances have to be in place for his rebirth, including the stipulation that he must be "the blood of the dragon." Um, remember that whole theory that Jon is a secret Targaryen, i.e. blood of the dragon?

If that's the case, and Jon Snow is this hero, then the show-runners couldn't have signaled their intent more clearly than by searing an image of Jon Snow with literal wings into our brains as the last thing we see this season. Talk about a visual cue, right? Either way, I think we can all agree that Season 6 can't come quickly enough, and hopefully it brings some answers along with it.