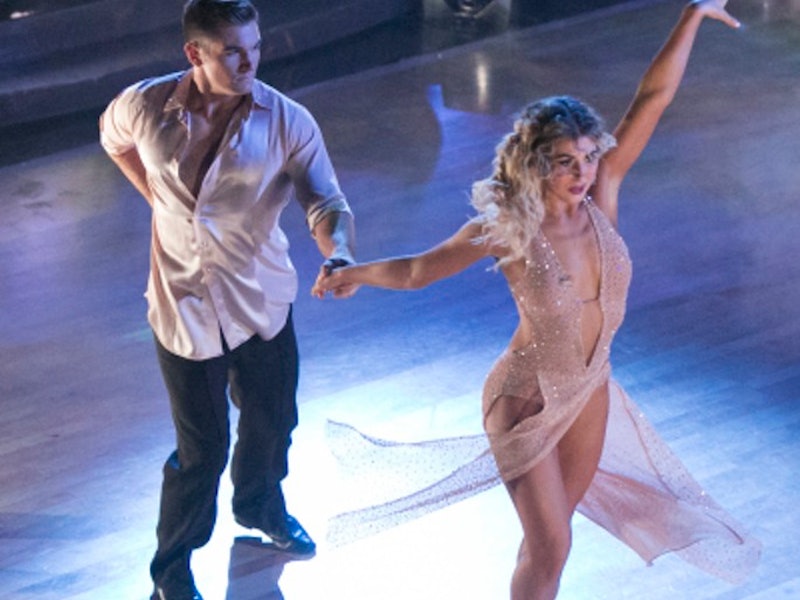 Dancing With The Stars is at it's best when the dancers and the stars have clear chemistry with each other. No one pairing this season is as electric together as DWTS couple Emma Slater and Alek Skarlatos. They pair so well together that it's surprising that Emma and Alek aren't dating. Frankly, it's borderline criminal that these two don't just admit they're into each other and start taking as many cute pictures together as possible — how are we, as a public, to believe in soulmates if these two can't see that they're crazy for each other? Luckily, we live in a day and age where we can know what the world would be like if these two were dating — specifically if Emma and Alek were dating and decided to have children.

Websites like MakeMeBaby.com, MorphThing.com, and Luxand Face Recognition can help us imagine a world where Alek and Emma realise that they're perfect together and create a populace full of their children who will probably grow up to start a dance studio for impoverished youths or something else equally artistic and heroic (just like their parents). So, set aside any concerns that you're thinking way too much about someone else's relationship, and let's see what those babies would look like!

This first baby draft has got Emma's wide eyes, and Alek's understated smile, and happens to look like it's listening Adele's new album right now. This baby may be young, but its eyes convey a sadness that most people don't encounter for years. Thankfully, Alek and Emma seem like they would be loving and supportive parents.

This baby, much like the MakeMeBabies baby, has wide blue eyes and a closed, reserved smile. This baby has a very intense gaze and looks like it wouldn't be out of place in a Jill Greenberg portrait. Morphthing also predicts that Alek Jr. is going to have some pretty messy baby hair — which seems fitting with Alek and Emma's laid back attitudes — and pinchable, puffy cheeks for the grandparents.

This baby girl switches things up, with bold brown eyes and a thinner, if slightly more pronounced smile. The cheeks are less puffy and the nose is a little wider than the male Morphthing counterpart. It's certainly a much less intense baby than the others so far and has more welcoming and friendly expression.

Oh, wow. OK, first off, there's something going on with that left cheek. Alek and Emma are going to have to take their baby to the doctor because that left cheek is way bigger than the right cheek. This baby, however, isn't afraid to show a toothy smile, unlike the other babies. In fact, this baby is so fearless that he's going to ride his bike — without training wheels — through a puddle when he could've easily gone around it. This is a baby that Emma and Alek can really be proud of.

Luxand has some hobby-prediction aspect to their baby morphing program, but it looks like if Emma and Alek had a kid, she'd become a musical prodigy. Perhaps a pop star destined to end up on Dancing With The Stars season 37? This child seems to be a tough worker, though, and already has circles under her eyes. Hopefully, Alek and Emma are making sure she gets some sleep.

As it turns out, baby morphing websites can actually be pretty silly. The only way to know how Alek and Emma's baby would look would be for Alek and Emma actually had a baby. (Or at least start dating, first.) While we can't know what that child will look like yet, we can know that it would probably be adorable and definitely be a great dancer.

More like this
The Ultimate Guide To 'DWTS' Season 31’s Move To Streaming On Disney+
By Brad Witter
Bachelorette Gabby Kissed Her New Fiancé On 'Dancing With The Stars'
By Jake Viswanath
Teresa Giudice Flipped A Table — Again —  On The 'DWTS' Season 31 Premiere
By Jake Viswanath
Dixie D’Amelio & Noah Beck “Love Each Other” Despite Breakup Rumors
By Julia Emmanuele, Jordyn Tilchen and Grace Wehniainen
Get Even More From Bustle — Sign Up For The Newsletter