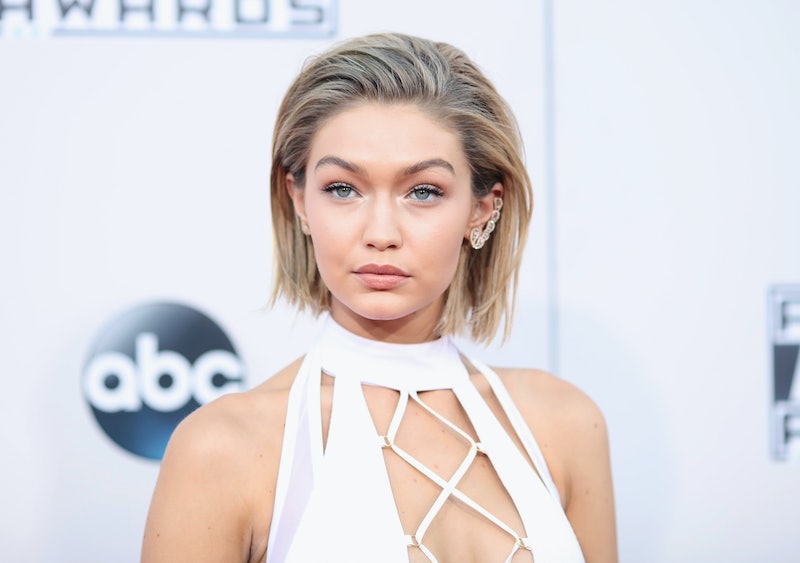 Is anyone else finding it challenging to keep up with the love lives of the newest members of Hollywood's It crowd? I thought I was in the know when Gigi Hadid was dating Joe Jonas, but apparently I'm waaay behind on this model's love life. A new report from Us Weekly has stated that Hadid is now dating Zayn Malik, a.k.a. the guy who left chart-topping boy band One Direction to go solo. So far neither Malik or Hadid have confirmed their romance, so it's as much of a mystery as the current state of Selena Gomez and Justin Bieber's relationship. Hadid dating yet another boy bander certainly makes it seem like there's a pattern emerging for this model, but it also came out of nowhere. But did it? Though we don't know for sure how how Hadid met Malik they certainly seem to have a few connections in common.

According to Us Weekly, Hadid and Malik were spotted together at West Hollywood restaurant The Nice Guy following the American Music Awards. (FYI, if the restaurant sounds familiar, it happens to be the same place where Tyga reportedly had his birthday dinner days earlier.) Oddly, reports of Hadid's alleged romance with Malik came just hours after a very awkward encounter between Hadid and members of One Direction. Giuliana Rancic "introduced" Hadid to the band during an already incredibly awkward red carpet interview, where Hadid shook Harry Styles' hand and proceeded to hug every other member of 1D. Watch the video and cringe:

While it appears that Styles rolled his eyes at Hadid, another video shows a different angle on the situation, one where Hadid throws Styles a "love you!" after the interview ends:

Neither parties have said anything about this awk encounter, but if I had to guess both One Direction and Hadid were probably uncomfortable because they were being introduced when they already knew each other. After all, there are plenty of reasons why Hadid would know One Direction, and specifically Styles: Hadid is pals with both Taylor Swift and Kendall Jenner, two ladies who reportedly dated Styles. Swift basically penned an entire album about her relationship with the singer, so it's likely that she introduced him to her friends. Maybe that's why Hadid was awk with Styles, but friendlier to the other members of the band.

But back to Malik: while we don't know if the Swift or Jenner connection has to do with why Hadid was spotted with the ex-Directioner, it's pretty clear that these two run in similar circles. Both are tabloid favorites, both are "hot right now," and both are newly single, as Malik just broke off his engagement with Little Mix singer Perrie Edwards. Really, it was just a matter of time before these two officially met.

It's way too early to tell if Hadid and Malik will become a Real Thing, or if they're destined for a date at the Nice Guy and nothing more. Just in case this is a new celeb couple in the making, we should probably all start thinking of combo names. Anyone else like G.I. Zayn?