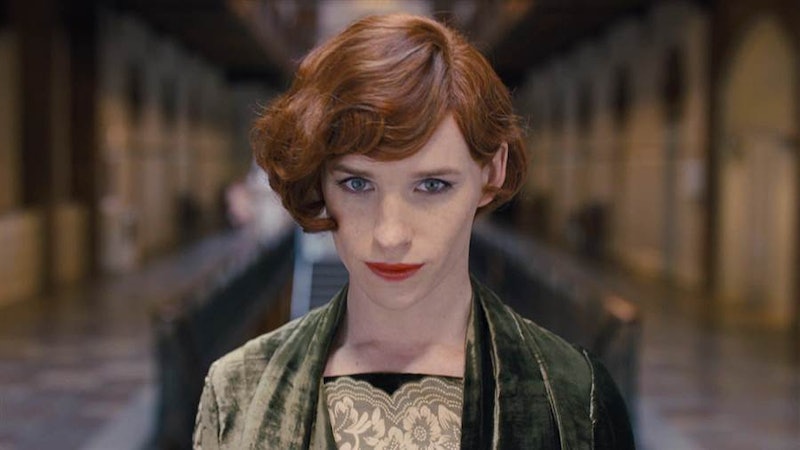 In a recent interview with director Tom Hooper whose film, The Danish Girl, will see a limited release in theaters Nov. 27, Hooper spoke about the process, sensitivity, and respect that went into bringing the true story of Lili Elbe, a trans woman and one of the first on record to receive gender confirmation surgery in the 1930s, to life.

"We had great transgender advisors like Rhys Ernst, who was on-set with us a lot, helping us. Eddie and I reached out to trans-women in pre-production," Hooper said in his Q&A with ComingSoon.net. "Lana Wachowski was massively inspiring to me at one point when I met her through Eddie very early on, and she spent an inspiring couple of hours with me. We tried to take account of the community’s feelings by involving them as much as possible, but we care hugely about the community’s response," he added. There's been some controversy surrounding the casting a cisgender male, Redmayne, in the role of Lili and the Oscar talk surrounding the film, but in the midst of Hollywood buzz, it's important not to forget the woman at the center of The Danish Girl — Lili Elbe herself.

What makes Elbe's story not only important, but incredible, is the fact that she was able to live as her authentic self during a time where resources in order to help her live as the person she identifies as weren't as advanced or readily available as they are today. During the early '30s, Elbe traveled to Germany where she underwent the first of surgeries — the last was a uterus transplant, where complications after the surgery caused her death. According to The Telegraph, in a saddening letter Elbe sent to her sister after her last surgery in September of 1931, she wrote, "Now I know that death is near... Last night I dreamt about Mother. She took me in her arms and called me Lili…and Father was also there…"

However, the summer prior, Elbe wrote to a friend acknowledging the possibility of death, but also expressed her immense joy at being able to live her authentic life. "That I, Lili, am vital and have a right to life I have proved by living for 14 months," she wrote. "It may be said that 14 months is not much, but they seem to me like a whole and happy human life."

Hooper told ComingSoon.net of his primary focus for The Danish Girl,

So if and when you go to watch The Danish Girl in theaters, take a moment before the film and several moments after the film to think of Lili Elbe and her story. Think about how Lili died from wanting to live authentically. Think of the fact that Elbe's narrative is not a new one when looking at the wide spectrum of the trans community today. Think about all of trans people, both in the U.S. and abroad who are fighting in order to live their authentic lives, who are still fighting against discrimination, poverty, and ignorance, who are still fighting against disgustingly high rates of anti-LBGT violence. When you think of The Danish Girl, don't simply think of the movie — think of Lili Elbe and all of the women who have come after her.