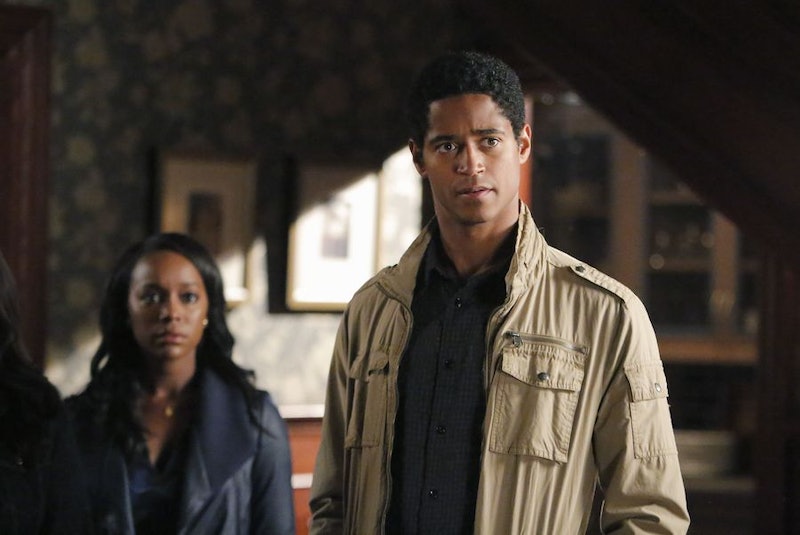 Wes' past has been a mystery on How to Get Away with Murder for a while. Annalise's past on How to Get Away with Murder —also a mystery. What we do know is that both of their pasts overlap, in some way. On the HTGAWM winter finale, we learned that Wes' name is Christophe, and that Annalise definitely knew him when he was a young boy. But, the new revelations about their pasts make me wonder if Wes will continue to work for Annalise when HTGAWM returns.

While we don't know exactly in what regards Annalise and Wes were connected, we can assume it has something to do with his mom's death. In a flashback, it was revealed that Wes found someone (a woman, presumably his mother) seemingly dead upon discovery. Watching from the waiting room was Annalise and Eve, where Eve asks Annalise "What did we do?" I don't know, Eve, what did you do? While we won't have that answer for probably another few months, whatever Annalise and Eve did might be enough to make Wes not want to work with Annalise ever again. If that's not enough, maybe one of these reasons would keep him away from Annalise Keating's office.

She Knows His Real Past

Wes now might be aware that Annalise has some connection to his past, which might be enough for him to say "bye-bye" to working with her. Whatever her connection is, he might feel duped enough by present day Annalise to want to stick around.

He Knows Rebecca Is Dead

Also, Annalise confessed to killing Wes' girlfriend. Is he supposed to just, I don't know, forget that? Then again, he killed her husband, so I don't know if they're keeping score or anything but...

She's Wrapped Him Up In Another Murder

Look, Wes came to school for an education. He didn't come to school to get wrapped up in murders (at least I hope so). Connor seems over Annalise Keating and all her drama, but will this be the last straw for Wes? It might be for the best, but then again, no. Not ready for the Wes/Annalise dynamic to no longer confuse the hell out of me.