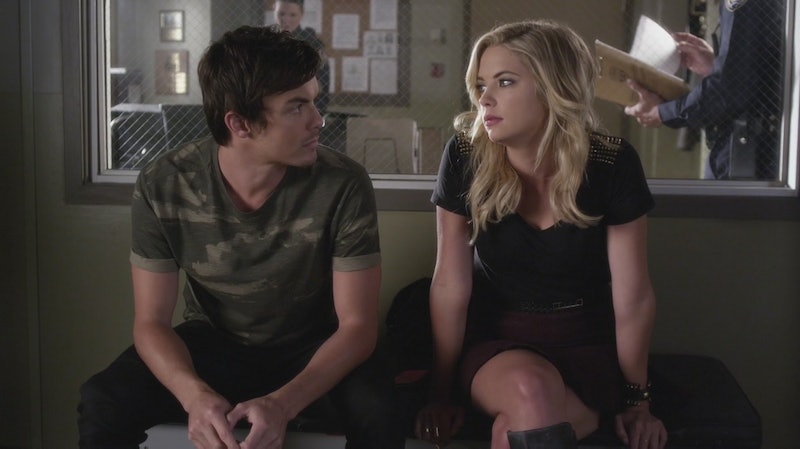 We left off with them moving to New York together, but the five year time jump has not been kind to Caleb and Hanna. Fans learned in Tuesday's Pretty Little Liars special that Haleb broke up due to some pretty understandable real-life reasons, not that it makes it any easier to know Hanna's engaged to a different guy (who she met in Europe no less). It turns out Hanna and Caleb aren't together because they were having a hard time connecting. Despite their close quarters (Tyler Blackburn described their Tribeca apartment as a "shoebox"), Hanna and Caleb didn't see very much of each other after moving to New York. Still, Bustle's PLL podcast, Taking This One To The Grave, was able to find the bright side of their breakup, giving fellow 'shippers some hope for Season 6B.

As we learned in the special, Hanna went to FIT for fashion and later snagged an internship with Zac Posen. Her job even took her out of the country to Europe (where she later met her new beau). As Ashley Benson put it, "She was always gone a lot traveling and didn't really make time for [Caleb]." I know it would be a lot to ask two high schoolers to stay together 5ever, but Haleb should have beat the odds, right? Unfortunately distance, busy lives, and not being on the same page lead to their relationship's demise. But problems like that can be overcome, as discussed in the "5 Years Forward" episode of Taking This One To The Grave, below.

With Hanna making her way back to Rosewood in 6B, I think we can all hope for a happy Haleb reunion soon. After all, everyone knows they're totally meant to be. Ashley Benson and Tyler Blackburn even made shirts. #Haleb4Eva.

For more on everything PLL, check out past episodes of Taking This One To The Grave:

And, for a Season 6A refresher, watch Bustle's drunk recap here: