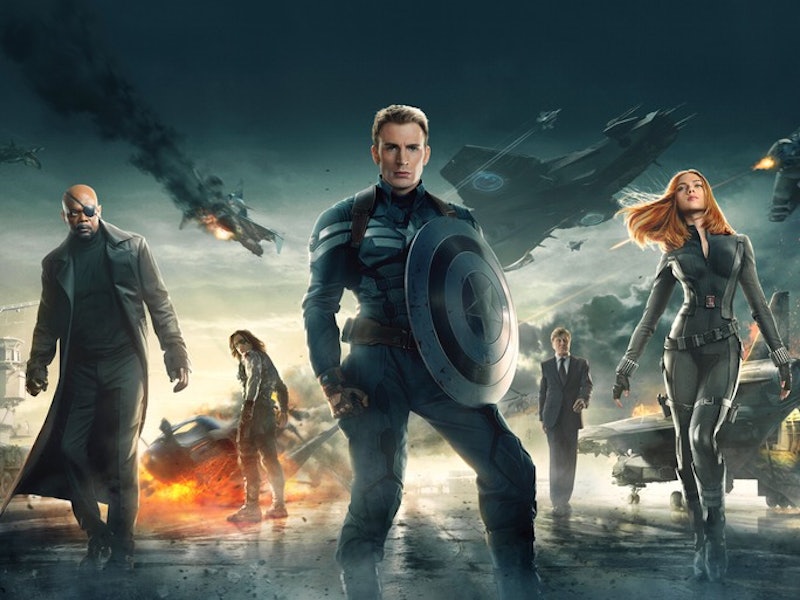 As you're probably well aware of by now, we're only a little more than six months away from the release of Captain America: Civil War . Based on a mid '00s crossover storyline from Marvel Comics, the film follows some of the most notorious superheroes of the Marvel universe who are at odds when a catastrophe leads the government to pass a law that would essentially make them government slaves instead of freelance vigilantes. Obviously this doesn't go over too well, and the likes of Captain America and Iron Man end up on opposite sides of the battle to control the heroes' powers and fates. If the description isn't exciting enough, it's about to get even better, because the first Captain America: Civil War trailer is here, and it looks amazing.

Chris Evans and Robert Downey Jr. made a surprise appearance on Jimmy Kimmel Live! on Tuesday night to share the new footage, which shows just how serious the battle is for our superheroes. Steve Rogers (Evans) leads them in their continued fight to keep humanity safe, while the clip also shows Thaddeus “Thunderbolt” Ross (William Hurt) telling the heroes that the world will "no longer tolerate" their operation without strict rules and supervision. Yeah, sounds like that's going to go over well.

To be honest, while I've seen several of the Marvel movies, I've never been a huge fan — not because they're not great, but because I've just never been big into comic books, and I think you need to love the originals to be able to fully appreciate the film adaptations. However, Captain America: Civil War looks like the best one yet, in my opinion, and I was totally hooked from the trailer alone. A battle between good and evil that's more complicated than good versus evil? I'm in. After all, I'm a sucker for a story where figuring out the who the good guys and bad guys are isn't always easy or quite what it seems, and that's definitely what's going on here.

Of course, we'll have to wait until May 6, 2016 to find out exactly what's going to happen. I know it seems like a long time, but it'll be here before we know it. In the meantime, we can keep watching the trailer on repeat and try to piece together exactly what's happening, because it seems like there's a whole lot.