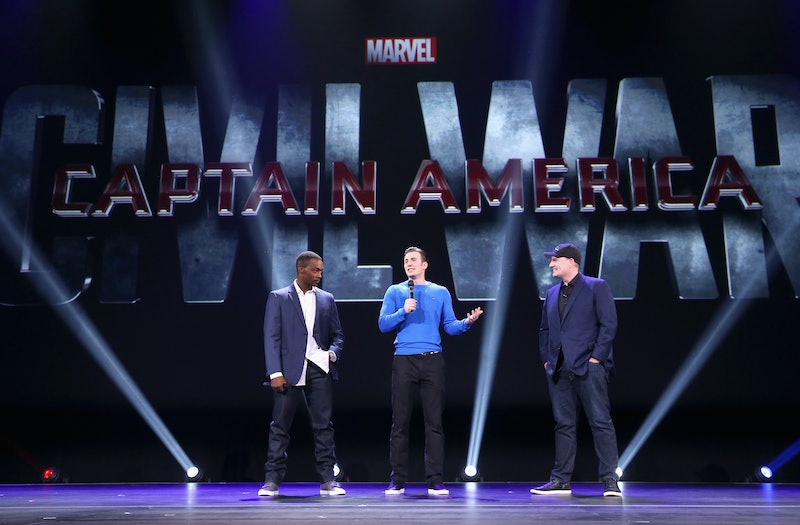 This year's D23 Expo was full of surprise announcements and exclusive footage of all the movies to be released under the Walt Disney banner in the next two years. Luckily, I was there in the trenches (and the long lines) to catch a glimpse of some exclusive content that Disney was willing to share with the mercilessly rabid and eager D23 audience — and that includes the first ever footage of Marvel's Captain America: Civil War .

When I say "mercilessly rabid and eager" to refer to the D23 audience, I'm not joking. The panel for a peek at Disney's upcoming live-action movies start time was 10:30 a.m. and by 6 a.m., the hall where the panel was to take place was at maximum capacity. People had been camping out the night before, and expo attendees were arriving as early as 3 a.m. They started an overflow line which didn't guarantee admission, but luckily I was able to elbow my way in. I thank the Marvel Gods for that.

Marvel Studios president Kevin Feige talked about the start of Phase 3 of the Marvel Cinematic Universe. After talking about a successful Phase 2 with The Avengers: Age of Ultron and Ant-Man, he shifted the focus to Marvel's future which includes Doctor Strange and, of course, the highly anticipated Captain America: Civil War (in theaters May 6. 2016). Besides a video message from Benedict Cumberbatch and an impressive conceptual art montage, they didn't have much to show for Doctor Strange because they haven't started filming. However, they did screen some footage for Captain America: Civil War... and it was good. Real good.

Anthony Mackie (a.k.a. Falcon in the MCU) and Captain America himself Chris Evans were met with a thunderous ovation when they surprised the audience in Hall D23. They were literally fresh off the plane from filming the final scenes of Civil War in Germany — and after the panel, they were flying back. They were gracious enough to be on hand to introduce the very first footage of Captain America: Civil War to a very excited audience. Security was super-tight and footage has yet to hit the Internet, but I'm here to tell you all about it.

The footage starts with Captain America, Falcon, and Black Widow (Scarlett Johansson) scoping out a truck driving through a crowded marketplace of a city from different vantage points. Captain America is in a room, Falcon on top of a roof, and Black Widow is at a cafe in plain clothes. After Captain says "Eyes on target," Falcon releases a nifty drone from his back to do a full examination of the truck. After reading off its specs, Black Widow says, "It's a battering ram!"

Then the action begins.

The truck stops and new baddie Crossbones (Frank Grillo) comes out of the truck and goes head to head with Captain America. Falcon and Black Widow make their way to the action. We see Falcon get to do more than just fly around and do some physical damage to some henchmen, while Black Widow does her signature acrobatic takedown to a couple of guys (that never gets old). After getting in a couple of good hits and unmasking Crossbones to finish him, the new bad guy mentions Bucky, which makes Captain stop what he's doing.

It cuts to a scenes from Winter Soldier where the Winter Soldier (Bucky a.k.a. Sebastian Stan) is rescuing Captain from the water. We hear General Thaddeus 'Thunderbolt' Ross (William Hurt) say (to Captain, presumably) “The world owed you an unplayable debt. People see you as a hero. There are some who prefer the word vigilante—people are afraid.” This is the basis of the Avenger vs. Avenger feud.

Then we cut to that end credits scene from Ant-Man where the Winter Soldier is trapped in a vice and is being questioned by Falcon and Captain America — but this time, he speaks.

Captain America asks him, "Do you know me?" To which the Winter Soldier answers, "Your mom's name was Sara." This shows that he is getting back some of his memories as Bucky. It also brings about the feels for everyone involved and hints that they will be partners in crime again.

This gives way to another sequence of montages, and we see exciting shots of the new members fans were introduced to in Age of Ultron: Scarlet Witch (Elizabeth Olsen), Vision (Paul Bettany) and some other old favorites. All the while a voice asks, "What would you call a group of enhanced individuals who inflict their will anywhere their choose?" while Captain America says, "Sometimes the safest hands are still our own."

You can feel the tension building, and then Tony Stark (Robert Downey Jr.) pops up on the screen and breaks the drama saying, “Sometimes I want to punch you in your perfect teeth.”

The voiceover between Captain and Stark continues and it builds into a debate about their role in society that is obviously leading to a civil war. The screen starts to fill with cuts of Marvel-brand fight scenes, Bucky in some sort of holding cell, and some exciting new faces. We see Martin Freeman in an unknown role, a quick glimpse of Daniel Brühl's Baron Zemo being pushed against a wall, and a shot of Black Panther's claws retracting — but sadly, no scenes with Tom Holland's Spider-Man. Still, it's a pretty awesome, rapid-fire collection of teasers.

All is interrupted when a voice asks, "What do we do? to which Captain answers, "We fight." Then we see a bunch of the Avengers running as if they were going into battle, which cuts to Hawkeye holding down Black Widow and trying to strangle her. True to MCU humor, she asks, "We're still friends, right?"

The action comes to a halt and cuts to a scene of a van pulling up to Captain America and his comrades. The door opens to reveal Scott Lang (Paul Rudd) sleeping in the back. He immediately wakes up. Smiling excitedly, he introduces himself to Captain and says, "Oh my God! Captain America, it's such an honor!" He sees the Scarlet Witch and says, "I know you too! You're great!" Nervously he shakes Captain's hand a little bit too long and says, “I’m shaking your hand too long, right?” Then he continues to touch Captain America on his shoulders in what could be the most awkward and hilarious scene in any Marvel movie. He ends the four-minute preview of Civil War by saying, "I know you know a lot of super people, so thanks for thinking of me."

The exclusive footage showed us a lot of cool "stuff," but barely scratched the surface of what Captain America: Civil War is really about. Even so, it gave me more than enough to chew on until the theatrical trailer comes out — which I hope is real soon.